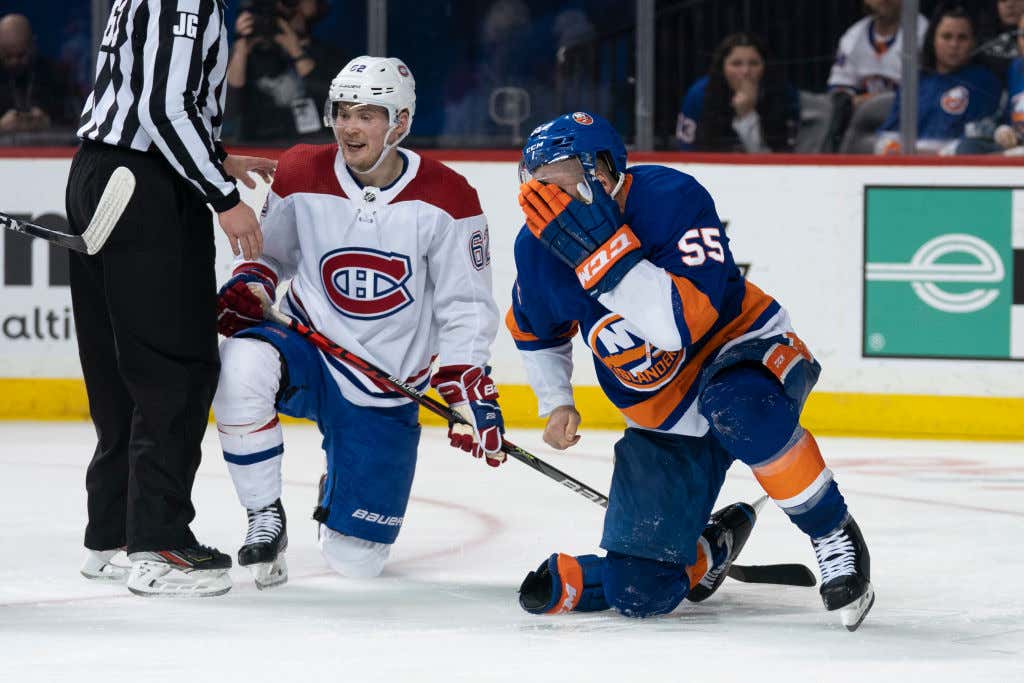 If you're a hockey fan then there's a good chance that you already saw this incident from last night. If you haven't already seen it, well then here is your warning that you're going to want to vomit if you click play on this video. Nobody is forcing you to click play here, and it's aggressively gnarly. So here we go.

Ho-lee shit. That was fucking terrifying, gruesome, and yet somehow one of the most miraculous incidents to ever occur in NHL history. Because from every single look of it, Johnny Boychuk could have easily lost his eye last night after taking a direct hit from the skate blade of Artturi Lehkonen. And the most terrifying thing about this incident might not have even been the blade to the face itself, but the reaction from Boychuk. As soon as you saw those legs kicking around, you knew it was bad. And then as soon as you noticed him realize how bad the situation might be and pop right off to sprint off the ice, I was almost positive it would have been worst case scenario there. It was pure "fight or flight" panic mode from Boychuk there to rush off the ice before the trainer even got a chance to get to him. The only positive sign is that there wasn't a trail of blood following him but still, that's way too close of a call for comfort.

We still haven't received any official updates on Boychuk yet but between his brother's tweets and a couple of other early reports, it looks like we just witnessed a miracle.

I mean….I think we can all agree that it's absolutely insane that these guys are flying around the ice wearing razor sharp blades attached to their feet, swinging these giant sticks and slapping around a rock-hard rubber projectile at upwards of 100mph all while only having maybe 1/2 of their faces protected. I'm not going to get up here and say that it's time to start making players wear full face shields. That's not my place and I know how much more comfortable it is to be out there with just a visor compared to a full cage. But we can still agree that it's preposterously insane. Like the fact that this doesn't happen all the time shouldn't make sense mathematically. The opportunity for something like this happening is there every single time these guys touch the ice, so it's another miracle that moments like this are few and far between. Just a total freak accident that you can't do anything to avoid other than wearing full face shields. It would be a shame if it took the worst case scenario to actually force a change here but these guys are all a bunch of grown adults who can make those decisions for themselves.

Either way, it sounds like out of all the awful scenarios that could have come out of this situation, we got the best possible one so that's all that matters now. And one last thing--if you think that Lehkonen kicked his leg back on purpose, just shut up and go take a lap. Total freak accident and it would be fucked up to pin that on him.