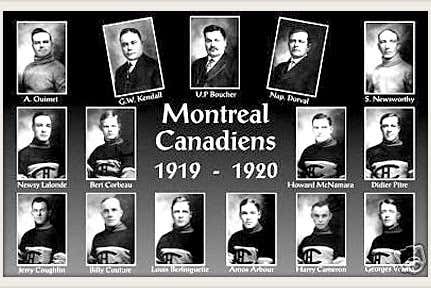 As the NHL began its third season, the Montreal Canadiens were one of the league’s top teams after playing in the Stanley Cup Finals in 1919. The Quebec team was a team in turmoil, officially known as the Quebec Athletic Club, the Bulldogs were returning to the ice after sitting out the NHL’s first two seasons due to financial loses. Joe Malone, who had played with the Canadiens during Quebec’s hiatus had returned, but had no help, as the Bulldogs were the worst team in the league.

As the season was nearing its end, the Canadiens were in third place in the season’s second half. At the time, the NHL played a split season with the winners facing off in a playoff to go to the Stanley Cup Finals against the champions of the Pacific Coast Hockey Association (Seattle Metropolitans). The Ottawa Senators had dominated all season and were already set to represent the NHL, eventually winning the Stanley Cup as March began. The team in Quebec was just hoping the season would end, as it was a franchise that was on its final legs, with the league getting set to take over and find new ownership. Joe Malone would be the NHL’s top goalscorer with 39 goals, but the Bulldogs finished with a brutal overall record of 4-20.

The night in Quebec where the Bulldogs were blown off the ice, began with Didier Pitre doing damage in the first period with three goals. Odie Cleghorn also scored for Montreal, who had a 4-0 lead at the end of the first period. In the second period, the game got out of hand as the Canadiens scored seven times, building an insurmountable 11-1 lead. Newsy Lalonde and Harry Cameron scored to give Montreal a 6-0 lead, before Tommy McCarthy to end Georges Vezina’s hopes for a shutout in a game that was already a laugher. The Canadiens would add five more goals in the second period, with Lalonde scoring twice to complete his hat trick. Cleghorn and Cameron each scored their second goals, with Amos Arbor scoring the other.

Up 11-1, the Canadiens continued to show no mercy on the Bulldogs in the third period as Newsy Lalonde scored his fourth goal to make it 12-1. After Harry Mummery scored for Quebec, the Canadiens had two more players join the hat brigade as Odie Cleghorn and Harry Cameron each recorded their third goals to extend the lead to 14-2. Amos Arbor added a second goal, while Joe Malone scored for Quebec. With the score sitting at 15-3, it would be Harry Cameron completing the carnage with his fourth goal, as the Canadiens rode away with a record-breaking 16-3 win. The 16 goals remain the most scored in an NHL game.

Following the season, the Quebec Bulldogs would become the Hamilton Tigers, as the team received new ownership.