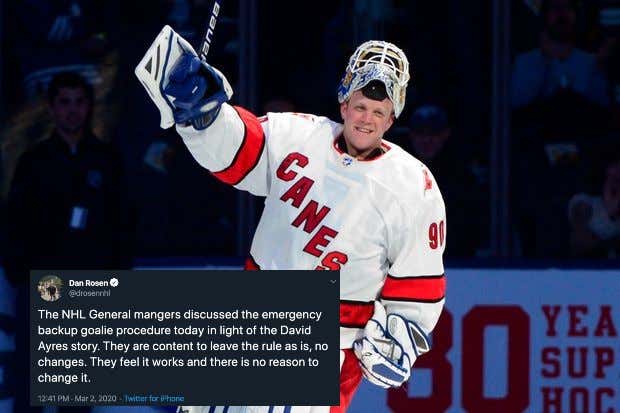 I can't imagine being someone who would see the David Ayres story go down and then immediately rush to complain and try to get the league to change the rule so that another situation like this could never happen again. But then I quickly remember that it was the Toronto Maple Leafs who had lost to their AHL Zamboni driver so I totally understand why Toronto fans would be losing their mind over the EBUG rule. (Quick sidenote here:  I really hate the acronym EBUG and we need to come up with something better. It ebugs the shit out of me).

If this had been the other way around or happened to any other team, we wouldn't hear a peep about changing the rule. We'd just get the media carwash and the late night show appearances and then be done with it. But because Toronto barely acknowledges the fact that hockey exists outside of their admittedly lovely city, there had to be a discussion at the GMs meeting to change the rule. I had a great time up in Ontario this past weekend so I don't want to shit all over the place, but I think we can all agree that as a fan base they are some extra large jackasses. But either way, the NHL GMs didn't cave and they made the right decision here. They won't be touching the rule nor should they.

It's so rare that one of these guys actually ever has to step in and see any action. And when moments like this actually do happen, it's great for the league. It's an awesome story that brings in a ton of extra exposure. Also it's so much smarter to throw a Zamboni driver in net who at least understands how to play the position and can wear all of his own pads instead of trying to throw your 4th line center between the pipes and take the risk of him getting hurt. So the haters can all pipe down and relax because chances are we're not going to see another David Ayres moment for another 10 years. Just appreciate the moment for what it was and we can move on. I know that's difficult for Leafs fans to understand but we don't need to change the rules anytime something doesn't go your way. If that were the case, we'd have to change pretty much every rule ever.