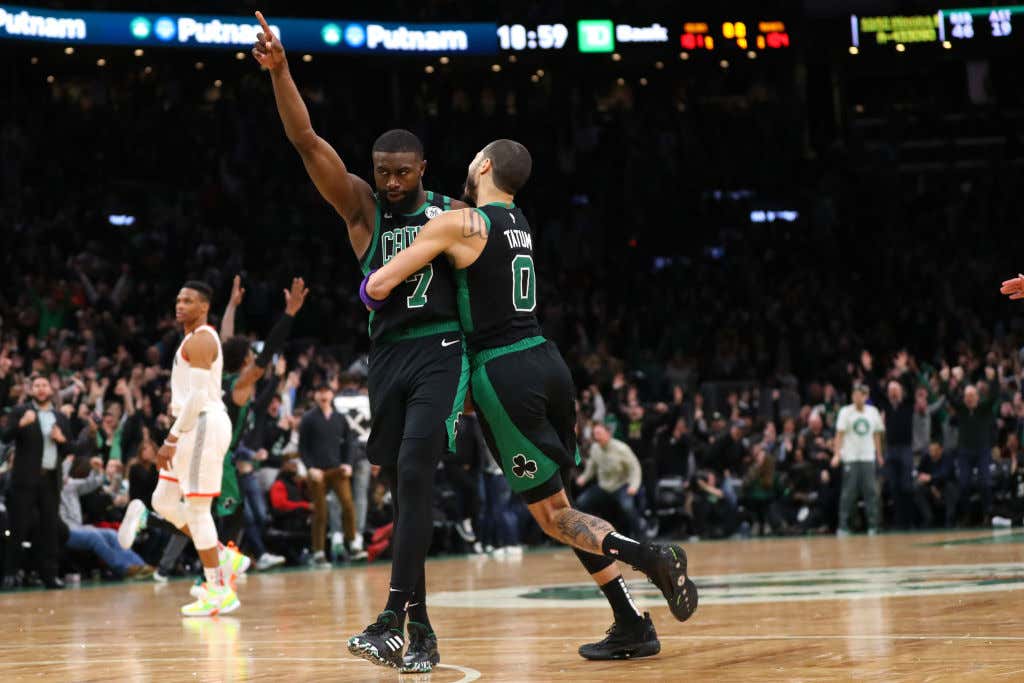 Yes, I am fully aware of the fact that this picture of Jaylen came in a loss but I don't give a shit. That was an awesome moment and an even better picture while also sort of resembling how we should feel about this Celtics team right now. We should start be reiterating something I make sure to put in pretty much every blog after a huge win or an embarrassing loss. Nothing we are seeing right now, good or bad, is going to dictate what happens in the playoffs. That time of year is about matchups and health and having time to scout your opponent, all that shit. Doesn't matter who the team is, what you see in February/March does not guarantee anything come the postseason. But to me, that's not what this is all about. This is about learning as much as we can about this 2019-20 team to help us try and form informed opinions on what exactly they are. Remember, we all wanted to believe in what we saw last year only to be burned when it mattered most. When I sent out that tweet at the beginning of this stretch to me it provided a great opportunity to see what this team was made of. Seeing as how they hadn't had a tough stretch like this the entire season, I was eager to see how they would respond.

The result? A very respectable 5-3 record and had they not collapsed down the stretch of two of those games, we're looking at a 7-1 record. Four of the five wins against playoff teams, a 3-1 West Coast trip, and overall this was a positive 8 game stretch. Remember, we needed to see what team was this really, was it the group that had the 2-6 stretch in January or are they the team that since has competed basically with the best of the best in the NBA. Now that we're here, I think it's somewhere in between.

There were a ton of positive signs, but also some concerning ones as well. If we are looking for potential trends to put weight into for the postseason, I think we learned a lot about this Celtics group and what kind of team they can ultimately be.

Jayson Tatum can be a #1

We may as well start off with the biggest learning from this entire stretch, and that is Jayson Tatum can be a #1. When you are trying to take down the best teams in the league, ones loaded with talent, Jayson Tatum has shown the ability to conistently be the best player on the floor. Notice I said consistently, because for many Celtics fans that's always been the biggest question. He's doing it at home, he's doing it on the road, and he's doing it against legit defenses. I don't think it's crazy to be of the mind that the Celts ceiling raises a little bit if this team's best player is Tatum as opposed to Kemba. That's what this stretch showed me, that this group has a guy that can elevate his play to a #1 level night in and night out. That's big.

Be careful with isolation basketball

The rise of Tatum is sort a double edged sword. Obviously not having Kemba active matters, but there's no arguing that during this 8 game stretch this team has become big time isolation heavy. So much so they ranked 27th in AST%. When it works, great. But just like we saw against HOU, that's not how this team is going to be successful. The whole give it to Tatum and stand around and watch gave me 2018-19 Celtics flashbacks. His passing still isn't at the point where we can trust he'll always make the right reads as opposed to force things offensively.

If they are hell bent on playing this way, I'd much rather see it run through Hayward (95.9th percentile) than Tatum (79th percentile). Not just because he's shooting 55% in isolation plays with a higher isolation points per possession, but because I also think he's the better passer.

It's time to give up on the bench giving anything offensively

The bench stinks offensively. You know it. I know it. We all know it. Now having played 8 good teams the Celts bench turned in 15.8 points which was by far the lowest in the league and shot 38.5% (30th). It's beyond clear that this team cannot rely on any member of the second unit to give any sort of consistent offense. Not having Kemba which meant Smart had to slide into the starters and Timelord being out obviously impact things, but I think we can all agree if any bench player (I count Smart as a starter) is going to play in the postseason it's going to be for their defense. Here's the good news. The two bench guys you expect to get some legit run in Grant and Semi both had 103 Drtg's over this 8 game stretch against quality opponents.

The Celtics need an answer to opposing teams trapping

To me, this is the most important thing we learned from this stretch. Good teams will find a way to trap both Tatum and Kemba and the Celts need to be prepared for it. How they handle that defense is going to mean everything for their postseason chances. Tatum had his issues with it, we know Kemba sometime's struggles with length when he gets trapped, so this is of the utmost importance. Does that mean run things more through Hayward as the primary ball handler? More Kemba off ball? All very important questions.

I get it, no Kemba matters late in games, but I can't just ignore what we saw from this team in "clutch" situations over these 8 games (Kemba played in 3). I'm talking about the 19th ranked offense paired with the 14th best offense and the 15th best net rating. They had 6 games that hit the "clutch time" qualifications and went 3-3. That's pretty average no matter how you slice it. This is where relying too much on Tatum isolation on one end scares me, and we did not see this team get the defensive stops it needs down the stretch of games which really isn't a Kemba issue.

Hayward is still struggling late in games, shot 30/33% in those 6 clutch games. Jaylen shot 22/33%. Theis only 37%. On the defensive end guys like Smart (110 Drtg), Jaylen (110 Drtg) and Theis (111 Drtg) all struggled during this stretch. Enes Kanter (133 Drtg) was basically unplayable. On the season the Celts are 4-4 in games decided by 3 points or less, so I don't think we can totally say you're confident in how this team will perform when things get tight. Especially now that we just saw what it looks like against good competition.

Rebounding might not be that much of an issue?

No doubt about it the Celts blew their last game against the Rockets because they couldn't snag a defensive rebound over PJ Tucker. That was bad. But what if I told you the Celts were 8th in the NBA over these 8 games in total rebounds? Think of who they played, OKC, LAL, LAC, POR all of those teams are legit as hell on the glass and the Celts actually held their own. They were 6th in defensive rebounds which to me is all I really care about, and this was while missing Robert Williams.

Their success in the playoffs on the glass will revolve around all 5 guys hitting the glass, the wings especially, and when you just look at the "forwards" over this 8 game stretch the Celts wings were 5th in the NBA in total rebounds. That's a trend we've seen all season and I'm officially buying.

Like I said on Sunday, when you take a step back and look at the big picture there's a lot to be excited about when it comes to the 2019-20 Celtics. Pretty much every time they've had a big test against a quality opponent they've found a way to pass it. Given how hard their schedule was in February, to walk out of it just 0.5 games out of the two seed with a 5-3 record over that 8 game stretch is pretty damn impressive. We're starting to see a team that you can actually believe in with full confidence, and now it's just all about getting healthy. We know this team can compete with the best of the best, now we just hope they get to take some playoff swings with a healthy squad.