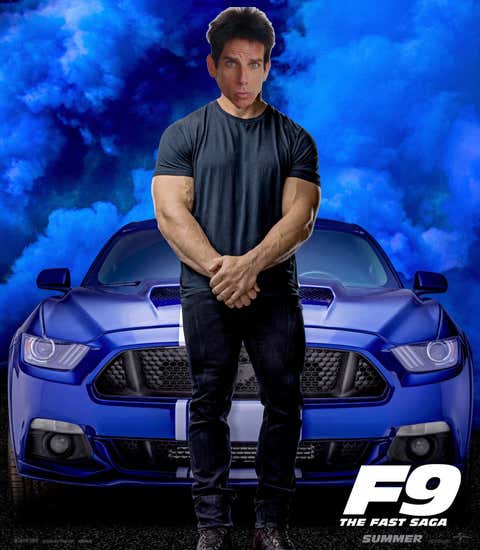 (Page Six) "In what would be a fascinating casting decision, Page Six is told that Ben Stiller will have a role in the latest installment of the “Fast and Furious” franchise. Even though the “Zoolander” star isn’t exactly known for his high-octane petrol-head performances, we’re told that Stiller is due to begin shooting scenes for “F9” soon.

It seems likely that it’ll be a small part. It stars regulars Vin Diesel, Michelle Rodriguez and newcomer John Cena. Reps didn’t get back to us."

Some of you might think 'Ben Stiller? The guy from 'The Secret Life of Walter Mitty' and 'The Meyerowitz Stories'? But EYE think of the comedic genius who tossed a child off a bridge in 'Tropic Thunder'.

What an underrated movie. I actually love this move, especially knowing that it will be a smaller role. One of the most pleasant surprises from 'Hobbs & Shaw' was the addition of Ryan Reynolds. He's obviously more of an action star guy, but his comedic value helped take the movie to another level. Did I just say "another level" describing a Fast and Furious spinoff movie? Hell yea I did. Adding a legit comedian should make for some hilarious moments. Also, I miss Ben! Looking at his filmography made me realize that I think the last movie of his that made me laugh was 'Little Fockers' which was legitimately 10 years ago. Shit, man.