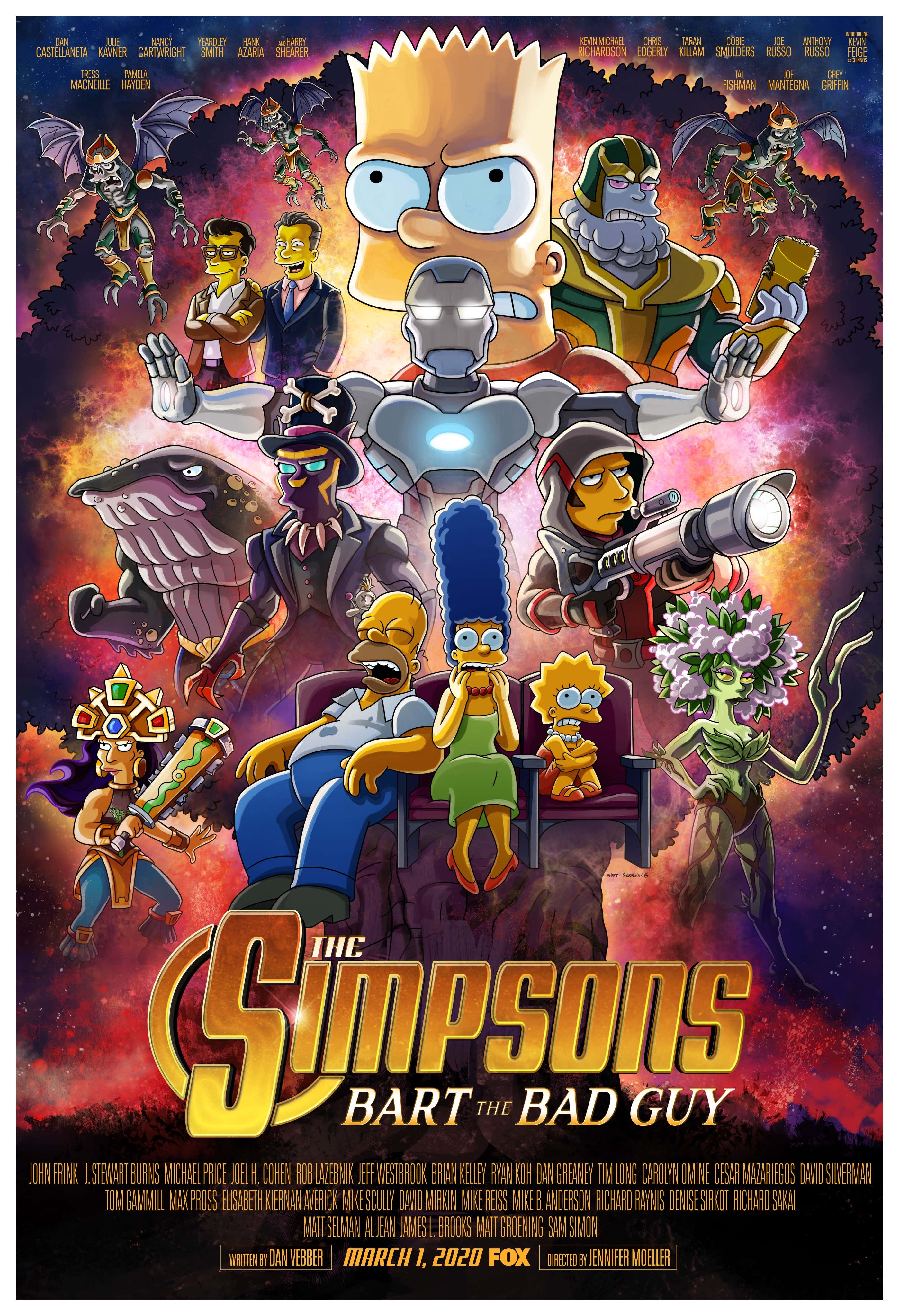 (Source)- Now that the Disney-Fox merger is finished, it seems that  The Simpsons will have some fun with it. In the upcoming episode of the show, the most irreverent family of Springfield will make fun of the Avengers franchise. To pump up the fans’ hype, producer Matt Selman has revealed a very Endgame-themed poster. The episode will feature cameos from Avengers directors Joe and Anthony Russo, and Avengers‘ Cobie Smulders. On top of that, none other than Marvel Studios president Kevin Feige himself will make his appearance. The Russos will be appearing as themselves, while Feige will voice Chinnos, a sort of Thanos with too many chins.

According to the official synopsis, in Bart the Bad Guy, Bart manages — by way of a massive misunderstanding — to see an advance cut of the unreleased sequel of the extremely popular Vindicator superhero movie franchise. And he quickly discovers that he can leverage his recently procured spoiler knowledge as blackmail material. But when the studio execs behind the film learn of Bart’s scheme, they vow to stop at nothing to silence him.

Welp, I guess I am watching a new episode of The Simpsons for the first time in*checks calendar* two decades or so! If Infinity War was the most ambitious crossover event in history, what is a Simpsonized version of Endgame with Kevin Feige, The Russo Brothers, and Robin Scherbatsky Cobie Smulders considered?

I know The Simpsons has answered the question "What would happen if an all-time great show stuck around about 20 years too long" a zillion times over to the point its like seeing a beloved family member slowly wither in front of your eyes after Thanos snapped their ass out of existence. But as anyone who follows me on Twitter or listened to me on My Mom's Basement with Robbie knows, I am obsessed with Infinity War and Endgame. Consumed even.  Before I started writing this blog, I was looking into buying an infinity gauntlet coffee mug because who doesn't need a 50th coffee mug? Anytime I need a pick me up, I either watch Thor arrive in Wakanda in Infinity War or the portals scene of Endgame. If there is a meme or a reference that can somehow be tied to either of those movies, I'm going to make it, likely for the 100th time. Shit, even on Halloween my wife and kids dressed up as the Guardians of the Galaxy while I dressed up as Thanos despite having the charm of Star Lord, because Thanos is my guy.

So of course I am going to suck it up and watch a watered down version of my favorite TV show ever mock spoiler culture no matter how much it hurts or lame the Chinnos character looks. Because as a wise titan once said: Dread it. Run from it. Destiny arrives all the same.