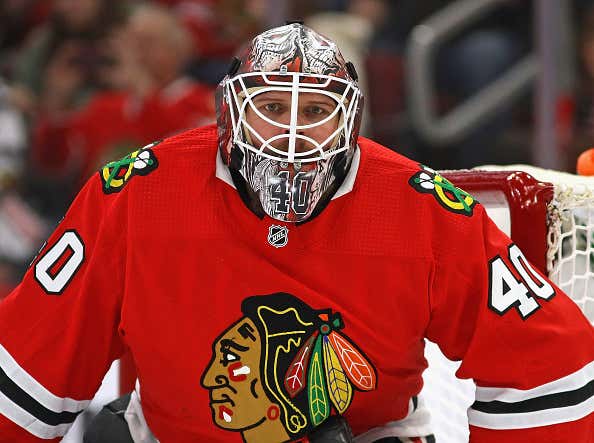 Things are REALLY heating up on the trade front. Major moves going down in the last 24-48 hours with the deadline less than a week away. It is making me very nervous

That's the fear. Reactionary because well, you know me by now, but still. The clock is ticking and teams that maybe needed a Maatta, Gustafsson, etc may not anymore. The Blackhawks biggest chip is still a goaltender and there were two very interesting bits of information from reliable hockey sources today.

6. Colorado is trying to make “hockey deals” to add up front and on the blue line. But all of the injuries — Philipp Grubauer, Nazem Kadri, Mikko Rantanen — put them in the market for depth at a cheaper cost. The one thing about the Avalanche is they won’t add big-money, big-term deals with extensions looming for Gabriel Landeskog, Nathan MacKinnon and Cale Makar. (Remember: They made an enormous short-term pitch for Artemi Panarin that didn’t interfere with their long-term situation.) That eliminates any Carey Price fantasies. Apropos of nothing, that Avalanche/Lightning game on Monday night was dynamite.

7. I do think Colorado checked out Corey Crawford. But Robin Lehner’s future ties into Chicago’s decision. Lehner’s performance during Chicago’s 5-3 loss to Edmonton raised eyebrows. Not because he was bad or anything, but because he was “quiet.” Lehner plays a “loud” game, both in terms of his voice and activity. The Blackhawks and his representatives are trying to find a match, but word is term is going to be a hurdle. Lehner has said that he deserves to be paid “fairly,” and it was so unusual to see him so placid that people were wondering if a lack of progress bothered him. He was back in goal for Saturday’s 8-4 win in Calgary, where he made a big save to preserve Chicago’s advantage when the game was still in doubt.

Carolina, meanwhile, has had a lot of interest in Lehner, and has that extra first-rounder.

I included the Colorado piece just to illustrate the fact that they are DEFINITELY in the market for a short-term upgrade at goalie. Lehner and Crawford being pending UFAs works in the Hawks favor RE the Avs. SO much so that Avs reportedly asked about Crawford. Crawford has the no movement clause so he'd have to want to leave. Lehner on the other hand…woof. That comment about the contract impacting his play is a red flag for me. And it was obvious in the game against Edmonton. A game that the Hawks desperately needed he was thoroughly out-played and just didn't seem to battle the way we've come to see and appreciate it. I am not sure you want a guy long term who is so easily impacted by external forces. Hopefully it was just a bad couple nights(I reject that he was back to his normal self against Calgary) and he will flip the switch back on and this storyline is bullshit. It does give me pause though. I've said for many times that I'd be fine giving Crawford 3 years at $4M AAV and making him the starter. I would feel even better about that if the Blackhawks were to get Grubauer back in a deal that sent Lehner to Colorado. Something to think about there.

Then Pagnotta had this little nugget as well

I've been criticized on my takes for the Blackhawks goalie situation going forward. I do think the goalie market looks pretty solid this summer. Suitable backups are there. Holtby as a reclaimation project on a one-year (especially if Lehner gets a big deal somewhere this summer), Greiss, Dell, Halak, and Khodobin would all make fine backups to Corey Crawford if the Blackhawks are not comfortable bringing up Delia full-time as a back-up. There's also Markstrom if they want to get aggressive and/or move on from both Crawford and Lehner in the summer. You're an idiot if you don't there's a way to come away with two solid NHL goalies from that mix.

The best part about being in a position to deal a goalie at the deadline…the teams that need one are asset RICH. Colorado and Carolina are stocked full of high-end prospects and/or multiple draft picks. Any prospect pool ranking you'll read will likely have Colorado and Carolina both in the top 5.

Carolina, as Friedman mentioned, has an extra first round pick which originally belonged to Toronto at their disposal. Colorado isn't going to give up Byram, but they have an embarrassment of riches at defense. Could they be talked into letting go of Timmons? They won't give up Newhook, but what about Shane Bowers? Both of those players for Lehner seems like a good deal to me.

As for Carolina they have so much of…everything. Two first round picks, two second round picks, two third round picks. They have Jake Bean in the minors even though he'd be playing 20 minutes a night for a team like the Hawks right now. They've got Jamieson Rees and Jack Drury, two VERY good centers who project as middle 6 players. Lehner could very well put Carolina over the top if he brings his A-game and they get into the playoffs. Could the Hawks wrestle away Rees/Drury, Bean, for Lehner, Caggiula, and taking back Reimer? I have no idea. Maybe that is steep, but I can dream.

It feels like the prices are high and the Hawks are in a PRIME selling position. There is no way the Hawks can win the Stanley Cup this year so they had better be focused on what gives them the best chance to win over the next two to three years. I believe the best place to start is right here, right now, and with trading Lehner.