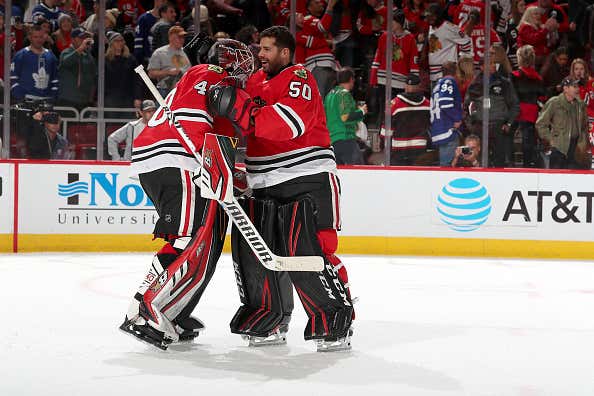 The trade deadline market is officially open. Moving and shaking. Buying and selling. It's an exciting time of year even if you suck because your team can actually be in the action. The Hawks are in that spot. They need to be sellers now. Officially. Not just because they can't win this year, but also because it's looking more and more like they are FUCKED next year as well.

Scott Powers did a good job breaking down the Blackhawks cap situation today in his blog, but in a nutshell the Blackhawks are going to be in trouble. They need new deals for Strome, Kubalik, and Caggiula, Debrincat's new deal kicks in, a combined $15M coming back on the books, in theory, with Shaw, de Haan, and Seabrook all coming off of long-term injured reserve. Oh and they don't have a goalie signed for next year. So yeah...fucked.

The best, and most prudent thing the Blackhawks can do in the short term is sell off pieces who won't be a part of the future. That definitely means Gustafsson, but it also likely means Lehner. I think if Lehner was going to sign then he would've signed already this year. Maybe he signs in the next week, but I wouldn't bet on it. He has stated that he wants fair market value for his services. The only way to truly find out what that is would be to be a UFA come 7/1. And as good as Lehner has been it is looking more and more like the Blackhawks won't be able to afford him because the Blackhawks have, like I said earlier, a lot of money tied up in players who make far too much for the role they play. Maatta making $4M, Zack Smith making $3.25M, Seabrook at $6.875M, and you can probably add Shaw to that mix as well with his $3.9M. Something has to give and my guess is that it will be Lehner. And since that is the case it is all the more reason to try to trade him now.

I think Crawford, even though he's older, has shown that he is still a capable #1 goalie. He is also less likely to leave and really test free agency this summer. He has been with the Hawks organization his entire adult life. Lots of ups and downs. I have a hard time imagining that he would be willing to leave the Hawks and also find a deal that pays him better than the Hawks would. 3 years at 4 million bucks AAV. If the Hawks can get Crawford at $4M AAV then their total goaltending budget goes from $11M this year to 5-6M next year. That is significant savings. Enough to help the Hawks absorb all the other costs above. In my opinion it's the only way forward. Sign Crow, trade Lehner, fire Stan for getting the Hawks in this mess to begin with.

PS: I wonder what the trade market would be for Ollie Maatta. You can never have too many defensemen, as the saying goes, and Maatta has quietly had a nice year. Having said that...they don't have the luxury of paying $4M+ for a 3rd pair dman next year. Maatta can be bought out for $1Mish against the cap going forward, but maybe they can find a taker for him if the Hawks agree to incurr 25% of his cap hit. So they'd get some sort of asset in return and be left with a similar penalty against the cap as they would if he were to be bought out. Something to think about.