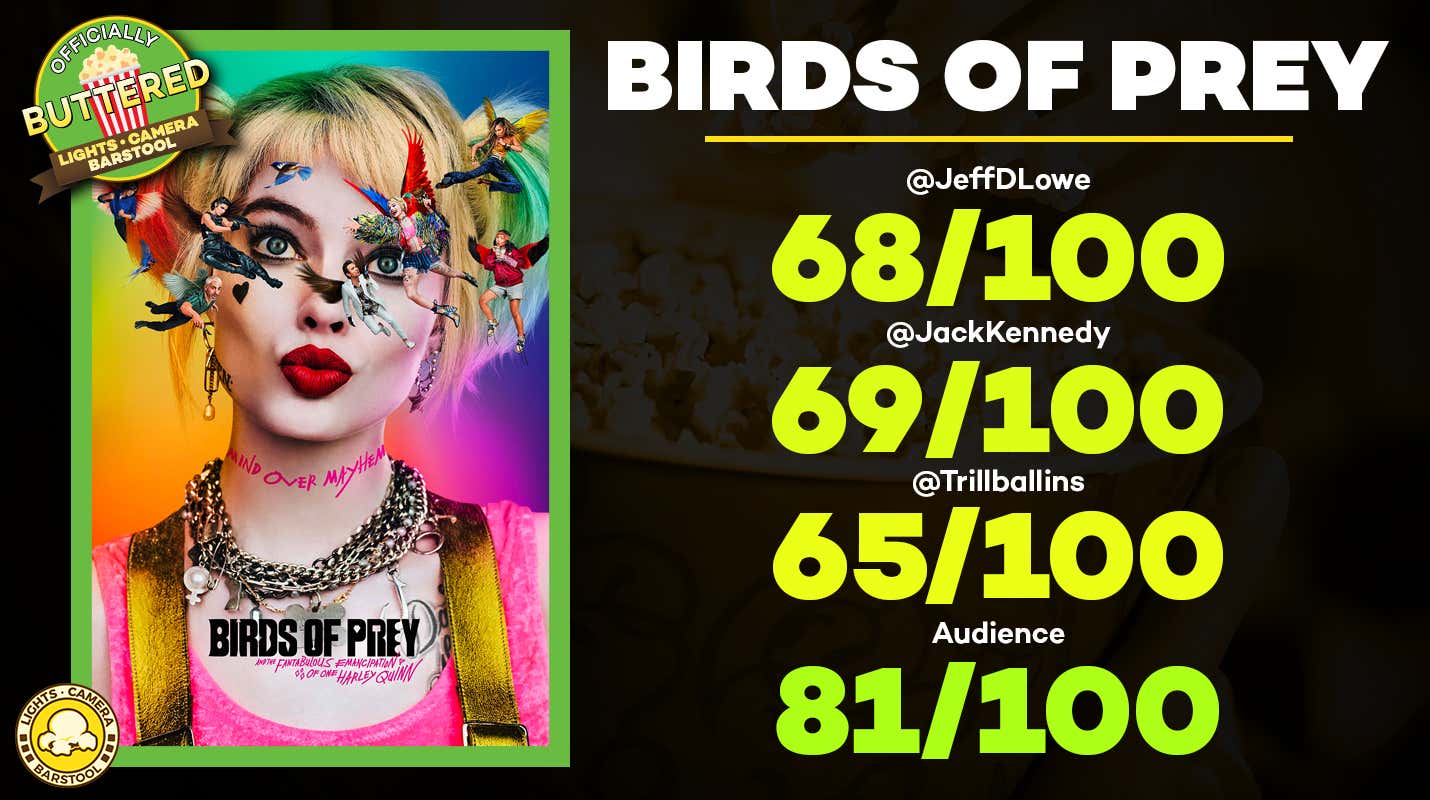 The movie changed its title because people weren't going to see (this has been disputed, but I believe the initial reports). We saw and it's time to give our thoughts...

It's open season on Harley Quinn when her explosive breakup with the Joker puts a big fat target on her back. Unprotected and on the run, Quinn faces the wrath of narcissistic crime boss Black Mask, his right-hand man, Victor Zsasz, and every other thug in the city. But things soon even out for Harley when she becomes unexpected allies with three deadly women -- Huntress, Black Canary and Renee Montoya.

Jeff D Lowe (68/100): Margot Robbie continues to play the perfect Harley Quinn, but the fun and explosive style of ‘Birds of Prey’ can only go so far with its terribly underwritten and developed villain and supporting characters. I can’t help but feel like this movie was a missed opportunity, despite a ton of incredibly enjoyable elements.

There isn’t anything negative I can say about Margot Robbie as Harley Quinn at this point. Despite one being a dumpster fire and the other being a letdown for some people (though, there are folks who really enjoy ‘Harley Quinn: Birds of Prey’), Robbie’s portrayal of Quinn is vibrant, unique and a total blast to watch. She has made the character her own and it’s hard imagining anyone else in this role at the same level as the Australian star.

Outside of Robbie, the action and visuals on display are some of the best parts of the movie. A scene of Quinn firing bean bags and glitter from a shotgun in a police station is up there with the top tier action scenes from DCEU movies…

There is an energy and spirit with ‘Birds of Prey’ that we have only recently seen from this universe in movies such as ‘Aquaman’ or ‘Shazam!’. A lot of the usual complaints about DCEU movies won’t be heard this time around and I commend them on more fun and bold approach.

The issues? A two-dimensional villain and supporting characters in a team-up movie that never gives you a great reason to connect with them on any level. Ewan McGregor delivers some great lines and is fun in the Black Mask role, but who is he? Why should we care about his motives? There isn’t a ton of meat on his bone.

This all could be countered with a super-strong cast of supporting characters, but all of their backstories are rather uneven and thin. Mary Elizabeth Winstead, Jurnee Smollett-Bell, Rosie Perez and Ella Jay Basco are all great, but they feel like filler at times. Winstead’s Huntress is such a badass character with a cool backstory that gets teased, but she felt like a complete waste. The bizarre structure of the movie’s first hour or so, with a multitude of flashbacks and narration, likely hurt how the characters developed.

I really wanted to love this movie, and I enjoyed a good chunk of it, but the issues with ‘Harley Quinn: Birds of Prey’ are pretty glaring. It’s an improvement on ‘Suicide Squad’, but I hope the reboot of that franchise gives Margot Robbie a ton more to work with.

KenJac (69/100): I really don’t know how to explain this movie other than the word “bummer”. There was an opening here to make a movie that highlighted Harley Quinn while giving us a big-screen look at some cool tertiary DC characters. This movie missed that opening and in its stead gave us a chaotic mess of a narrative that was saved by some awesome action moments.

I don’t think there was a bad performance outside of maybe Ewan McGreggor, but I think my gripe was more with his character than with him. Robbie is an amazing Harley Quinn, and the new characters are all pretty cool.

There are three problems I have with the movie. The first is that the storytelling is chaotic in a bad way. I think they were trying to use the craziness of Harley Quinn’s brain as a narrative tool, but it just doesn’t work. The second is that there is no compelling antagonist. Black Mask stinks and is never really a threatening force compared to how powerful the protagonists are. The last is that the characterization of the characters not named Harley Quinn is incredibly lacking. I already know Quinn, give me more about the birds of prey. We don’t get much of a chance to know them, and they aren’t even in the same scene together until, like, the closing 15 minutes of the movie.

The reason you should watch the movie is this: The action fucking rules. I think it may actually have my favorite action sequences out of all the DCEU movies. The fight choreography is extremely well done and it’s paired up really well with some badass music. Other than that, there isn’t much to it.

----
The movie is actually Officially Buttered even with Trillballins' low score because the Audience really loved the movie. You can hear our full review, as well as our Top 5 Movie Music Moments on this week's upcoming Lights Camera Barstool. Make sure to rate all 2020 and 2019 movies on a scale of 0-100 in the links below…