An eccentric multi-millionaire believes he has come up with a solution to the homelessness crisis - by tying two wheelie bins together.

Peter Dawe, 65, of Ely, Cambridgeshire, says he has created a unique 'sleep pod' which he insists is the answer to keeping rough sleepers dry at night.

He showcased his design in a video where he starts by laying a lid down as a 'pillow' before clambering in one half and lifting the second over his head so he is enclosed.

The two bins are bolted together and can be modified with small sawed squares to create air holes - at a total cost of just £100, he claims.

But his idea is struggling to take off after it was branded 'demeaning' by social media users, and local homeless charities tried to distance themselves from it.

Never - and I mean NEVER - has there been an idea this good. Peter Dawe, a man who has clearly spent many cold nights on the brutal streets, has finally come up with the idea that will help combat the homeless problem. I mean only a multi-million dollar brain can come up with an idea as smart as putting two garbage bins together. Who knows, maybe he'll get real crazy and suggest something like putting two cardboard boxes together, but of course, cut an eyehole out for vision.

Imagine being in a passing car whilst he was shooting this video. I think everyone's reaction would be the same if you saw a middle-aged man slithering into a pair of trash bins.

In all seriousness, this Peter Dawe fella is a real dumb-dumb. How on earth can you possibly think making that video is a good idea? Even if people responded well to the video and went through with the trash can idea, wouldn't it just lead to a plethora of problems? I don't even know where you can just buy trash bins like that and I doubt the homeless know either. I feel like this would just lead to homeless people stealing/emptying people's trash just for a dry night's sleep.

"Honey, where did our garbage cans go? Why is there trash everywhere"

"Oh don't worry, that man over there just seems to be borrowing them" 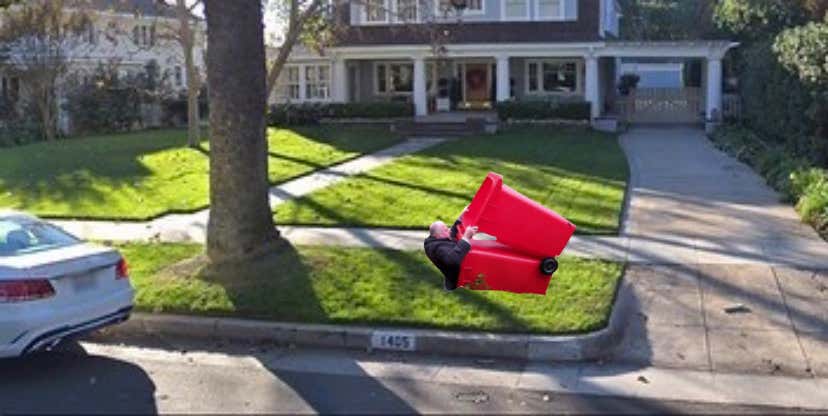 Say they weren't gonna steal the garbage cans, say they were finding some emporium of plastic garbage bins. I still feel like there is definitely a more effective use of $100 than spending it on two garbage bins. Food, perhaps. Maybe even a very inexpensive hotel room somewhere. Pretty much anything other than wasting it on a couple of hunks of plastic.

It was a nice sentiment from Peter Dowe, trying to help out homeless people all over the place. No one should be living on the streets, but this was just ridiculous. What happens when the trend catches on and the streets are being overrun by big ole garbage cans? The homeless would probably just get yelled at and have the bins taken away anyways. So I think it's best for Peter to just get back in the lab and try another idea.