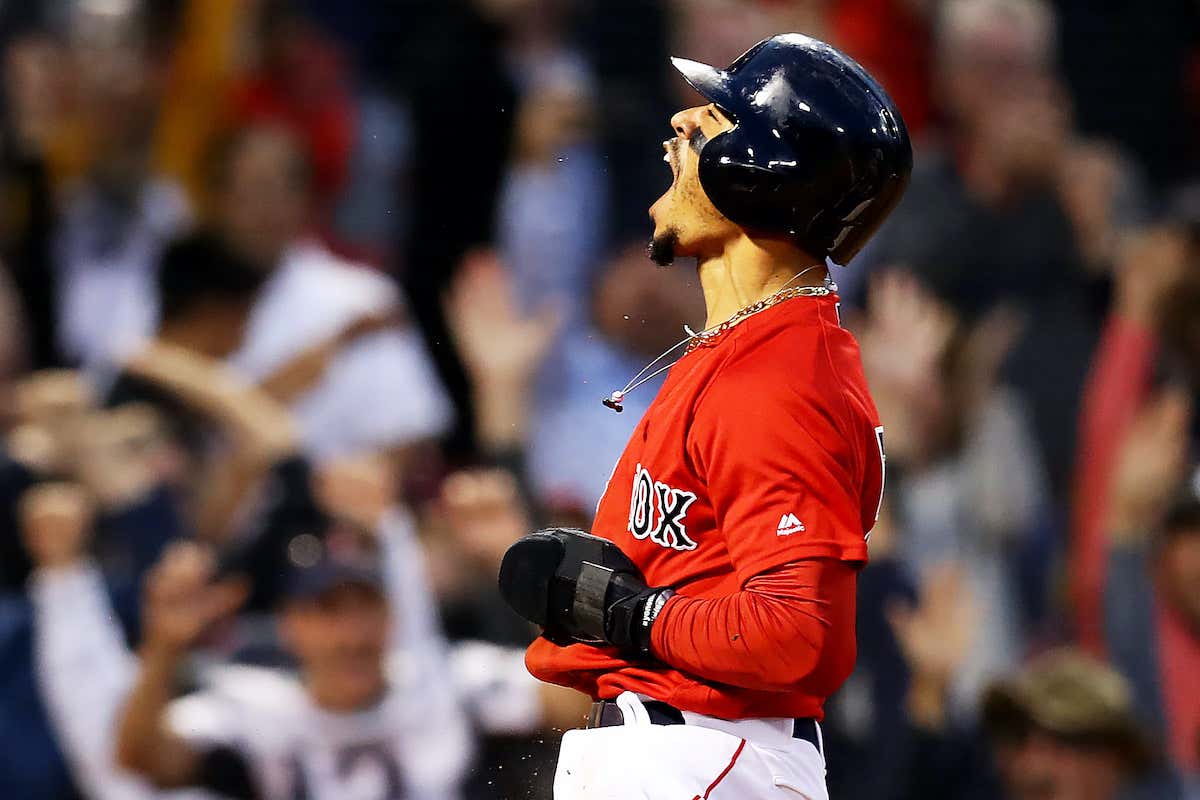 Yeah, I'll be honest -- I've got a problem with this. Before I explain why, it first needs to be said that I fully support Mookie Betts going to free agency and getting the most money possible. He’s earned that. Whether that money comes from the Red Sox or elsewhere, it doesn't matter. I've said that a million times. No hard feelings if and when he signs with another team in free agency after the 2020 season.

That being said, you can’t play both sides of the fence and say “this is my home” and that you don't want to go anywhere else. Xander Bogaerts wanted to stay. Mookie Betts wanted the most money. Both are fine. But you cannot have the best of both worlds. You can't make it abundantly clear that you will not sign for a cent less than market value, and then say that Boston is your home and that you don't want to play anywhere else. That's just not how this works.

Again, in the cases of guys like Dustin Pedroia and Bogaerts, those are two players who openly said that they loved Boston and they quite literally did not want to play anywhere else, so they proved that by signing extensions that were for notably less than what they could have gotten on the open market. You also need to understand that this should never be expected of any player ever. A player is not "disloyal" for not taking less money than they're worth to play for your favorite team. Some guys just prefer the comfort of what they know, and they're willing to sacrifice dollars for that comfort.

Then you have guys like Mookie, who are generational talents. These are the players who set the bar for everyone else behind them. The superstars of tomorrow will be compensated by using what Mookie gets paid a year from now as a benchmark. Mookie should take pride in knowing that he's carrying the financial torch for the up and coming stars in this game. Just a few years from now, agents will be in conference rooms saying things like, "If Mookie Betts is worth X, then (insert name of client) is worth Y based on reasons A, B and C." Mookie is about to become the bar.

Why not Mike Trout? Because Trout also signed for less than what he was worth. That's why, while I'm in the "Betts can't get Trout money because he's not Trout" camp, I could turn around and say that Trout didn't even get Trout money. I mean, he didn't. So, when we're evaluating what a Betts contract would look like, yeah, it's going to be somewhat close to Trout's money because Trout didn't even sign for as much as he was truly worth. So, if Betts is going to get paid what he's truly worth, then that will set the market for everyone else later down the line.

That's why it's important for Betts to ignore the ignorant claims of disloyalty and greed. Go make your money, champ. Just spare us the song and dance about never wanting to play for another team and Boston being your home. Home, for you, is where the money is, as it should be for a player of your caliber. I just selfishly hope that's Boston again.

PS -- There is a small, small part of me that's holding out hope that these Mookie quotes play a role in free agency. I just keep going back to what happened with Jon Lester. Not so much the negotiation part that the Red Sox embarrassingly botched. The part where Lester said he couldn't imagine playing for another team, but then when the Red Sox traded him to the A's, he saw that it wasn't so bad playing for another organization and that allowed him to sign with the Cubs.

He basically said that if the Red Sox didn't trade him, he probably would've just re-signed in free agency, but they forced him out of his comfort zone to play elsewhere, and it was much easier to sign somewhere other than Boston when the time came. Hope that's not the case with Mookie, but it more than likely will be for that reason and also because of the obvious reason. The money.