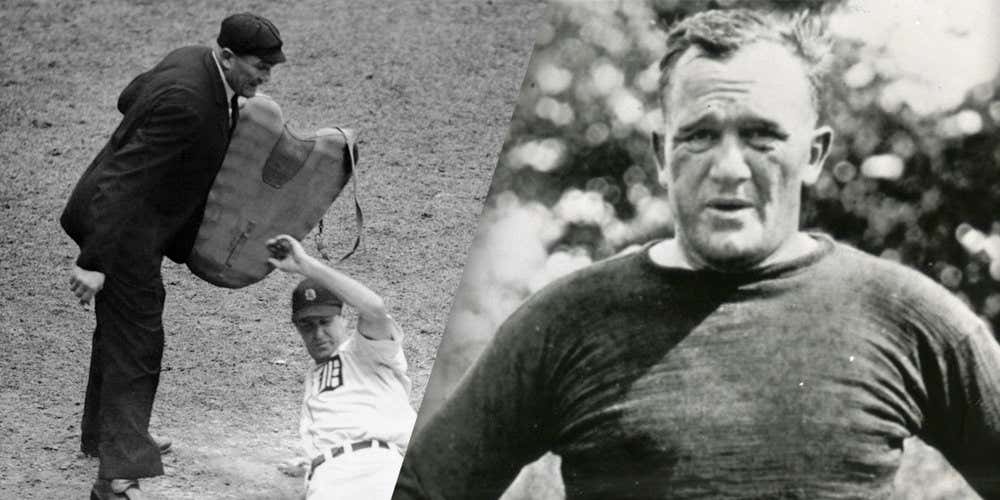 Cal Hubbard becomes the fifth umpire enshrined in baseball’s Hall of Fame when the Veteran’s Committee elects him. Hubbard has served as an American League Umpire from 1936-1951. Before becoming an umpire, Cal Hubbard played in the NFL for ten seasons as a tackle. Spending most of his career with the Green Bay Packers, he was a member of the Pro-Football Hall of Fame’s inaugural class in 1963. To date, he is the only person in both the baseball and football Hall of Fames.

Robert Calvin Hubbard was born on October 31, 1900, in Keytesville, Missouri. Hubbard had wanted to attend West Point, after staring in High School in Missouri, but was rejected from the Army due to having flat feet. A few years later, a chance encounter with coach Bo McMillian allowed him to restart his football career and attend Centenary College. Hubbard would then follow McMillian to Geneva College in Pittsburgh and was a big part of an upset win over Harvard.

In 1927, Cal Hubbard was offered $150 per game to play for the New York Giants. The Giants won the 1927 NFL Championship, allowing the fewest points in the league, with Hubbard earning All-Pro honors. Cal Hubbard struggled in his second season in New York as he did not like living in big cities. He would request a trade to the Green Bay Packers, which was honored by the Giants in 1929. With the Packers, he became a force on the defensive line, earning recognition as the “Greatest Tackle in the history of the NFL.” The Packers would win three straight championships with Cal Hubbard leading the way, 1929, 1930, and 1931.

While at the top of his game, Cal Hubbard began umpiring minor league baseball games in 1928. As NFL career progressed, Hubbard got a reputation as one of the top officials in professional baseball. In 1934 he stepped away from playing to try his hand at coaching but returned to Green Bay in 1935. The following year saw him promoted to the American League, becoming a major league umpire. Cal Hubbard would play one final season in the NFL after his first year in the American League, splitting the season between the New York Giants and Pittsburgh Pirates.

After his football career came to an end, Cal Hubbard quickly became one of baseball’s top umpires and was chosen to work the 1938 World Series. He would work in the Fall Classic, three more times in his career in the years 1942, 1946, and 1949. Hubbard was also chosen to work the All-Star Game in 1939, 1944, and 1949, twice serving as the home plate umpire (1939 and 1944) in the midsummer classic. Cal Hubbard was forced to retire from umpiring in 1951 as he suffered eye damage in a hunting accident, with a pellet striking his right eye.

After his retirement, Cal Hubbard lived in Milan, Missouri, working in youth sports. Today the high school field in Milan is named in his honor. Hubbard died on October 17, 1977, after a long bout with cancer. Hubbard is one of just ten umpires in the Baseball Hall of Fame. Besides being an inaugural NFL Hall of Famer, Cal Hubbard is in the College Football Hall of Fame and was named to the NFL’s 50th, 75th, and Centennial Anniversary teams.