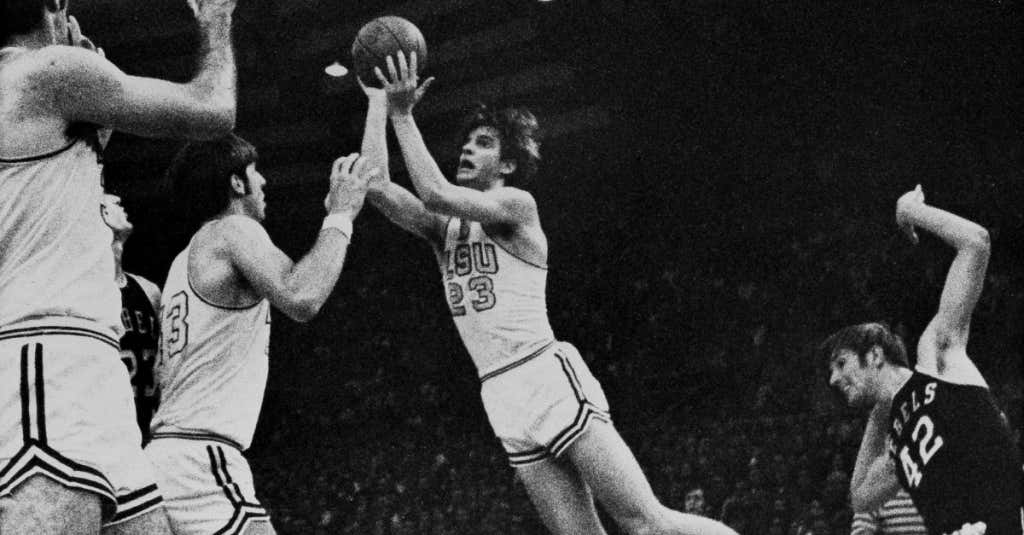 Peter Press Maravich was born on June 22, 1947, in Aliquippa, Pennsylvania. The son of coach Press Maravich, Pete, was a basketball prodigy as he was seemingly born dribbling a basketball. His father was the coach of Clemson and NC State. As Pete Maravich was a star in high school, schools began to heavily recruit the younger Maravich, who became known as “Pistol Pete” for his dribbling and ball-handling abilities. When it came time to decide where Pistol Pete was going to college, the two came as a package deal as LSU hired Press Maravich at the same time that Pete Maravich chose to bring his talents to Louisiana.

At the time, Freshman was not allowed to play on the varsity team; this would mean that fans in Baton Rouge had to endure an awful 3-23 season while Pete Maravich electrified the crowds watching the freshman team. When Pistol Pete hit the floor as a sophomore, it was “go time,” as his father set up the entire offense around his game. While the Tigers were not a team that was championship contender, it was all about Pete Maravich as he averaged 43.8 points per game as the Bayou Bengals finished the season with a record of 14-12. The entirety of Maravich’s career at LSU was about scoring and not winning. As a Junior, Pete Maravich had 44.2 ppg, as LSU went 13-13. As a senior, he averaged 44.5 ppg, with the Tigers posting a record of 22-10.

Pete Maravich never played in the NCAA Tournament, as only one team per conference was invited to the tournament at the time. They would go to the NIT in 1970, and reached the Final Four, losing both the semifinal and consolation game. While LSU’s lack of success could be used to criticize Pistol Pete’s game, his scoring record remains one of the NCAA’s most impressive individual records. No player has come within 400 points of Pete Maravich’s record as Freeman Williams, who attended Portland State between 1974-1978, is ranked second with 3,249 points. This means Maravich’s record is unlikely to fall any time soon, with the best players going to the NCAA as one and done and moving on to the NBA.

One thing that makes Pistol Pete Maravich’s 3,667 points even more impressive as he played in an era in which there was no three-point line, no dunking and teams were allowed to play keep away as there was no shot clock, and his stats on the freshman team are not included in the record. On top of averaging 44.2 ppg in three years at LSU, Maravich had 6.2 assists and 5.3 rebounds per game showing his overall skill as he shot .447 from the field.

Drafted third by the Atlanta Hawks in the 1970 NBA Draft, Pete Maravich had a solid NBA career, playing in the All-Star Game five times and winning one scoring title while later playing for the expansion New Orleans Jazz, where he became the face of the franchise up until they moved to Utah. After retiring with the Boston Celtics in 1980, Pete Maravich was enshrined in the Hall of Fame in 1987 and would later be named to the NBA’s 50th Anniversary team. Sadly, Maravich was the only member of the NBA’s 50th Anniversary team that had passed away. Pete Maravich died from a heart attack caused by a rare defect in his coronary artery on January 5, 1988, at the age of 40, while playing a pick-up game of basketball.