[Source] - The NBA announced major changes to the All-Star format on Thursday, turning every quarter into a mini-game for charity before an untimed final quarter with a target score that will decide which team wins. Scores will be reset — back to 0-0 — at the start of the second and third quarters, then restored to begin the fourth quarter.

The team that wins the All-Star Game will be the first to reach a target score, determined by the total points the team in the lead scored in the first three quarters combined — plus 24, the obvious nod to Bryant. 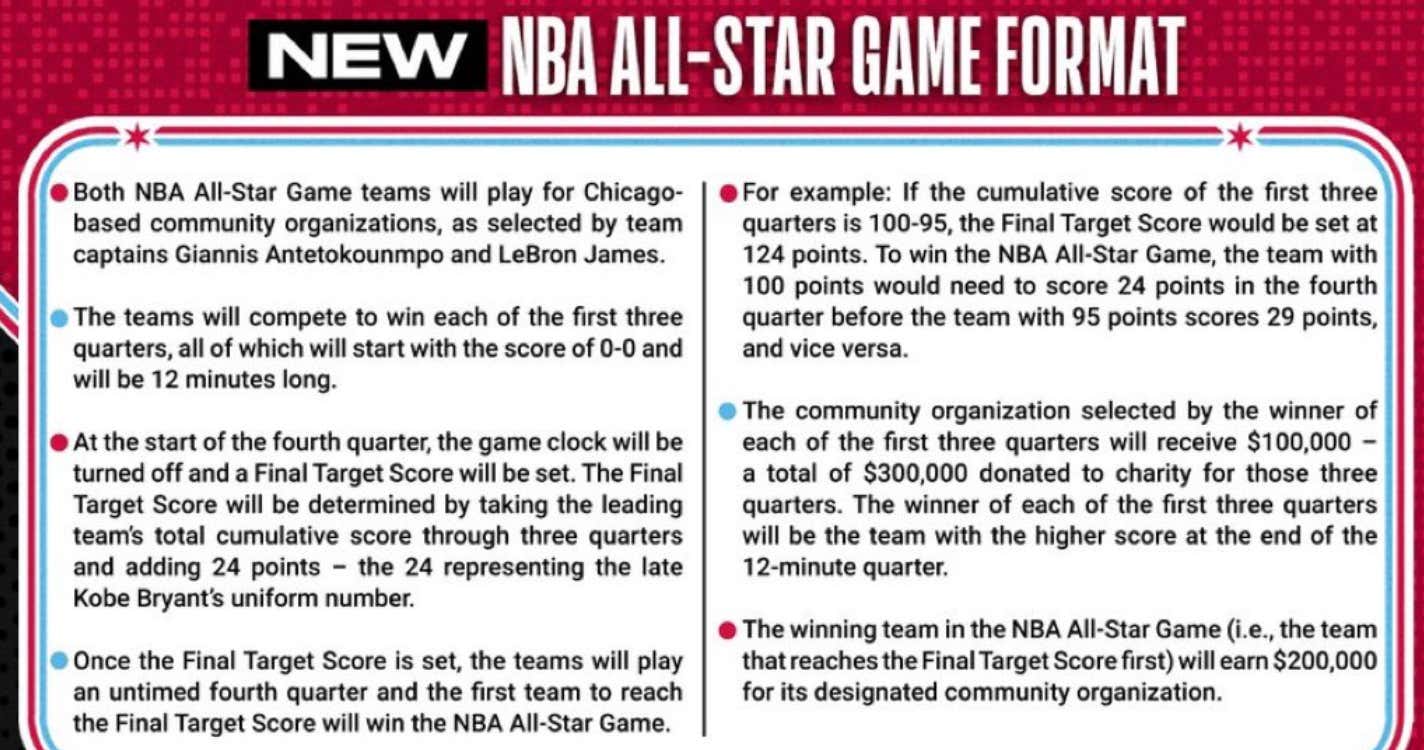 I absolutely love this idea. It's the All-Star Game, so we don't need some sort of true game. Feits summed up All-Star Games perfectly last week with the NHL one.  It's also the prefect way to honor Kobe. There was a bunch of talk on how to honor him and I'm sure there will be something named after him at some point, but for now this is perfect. Everything going to charity and using his jersey number 24 for the obvious nod to him.

The one thing that a lot of people complain about All-Star Games is a lack of caring. The one thing I will say about the NBA is for 3 quarters it's typically fun and games, showcasing dunks and letting bigs dribble, etc. Then if it's close, we see dudes take it serious in the 4th quarter and as a basketball fan there was nothing more fun than watching the best dudes in the league play with/against each other, even if it was just for 8 minutes.

But now with the idea of resetting the score and still a final score at the end you may get that intensity more than we had before. It'll be pretty dope seeing Giannis and Kawhi lock each other up trying with a minute to go in the 2nd quarter trying to win $100,000 for charity.

The target score is different. It became big with the rise of TBT in the summer, but it's also just the basic way to play hoops in pickup. You play to 11, 15, 21, whatever. That's what this is, just a determined score based on the lead + 24 points for Kobe.

“It almost takes us back to when we would play on the playground,” Spruell said. “We’d go up to 15 or 21 or what have you. This time it’ll be 24 with someone hitting a gamewinning shot.”

It's just going to be a 1-year thing for now and honestly cool. I'm all for the All-Star Game trying different things - captains, this, etc. Why not? The game is for fans of all ages, it doesn't need to be serious. And obviously the nod to Kobe is an A+ touch. The dude was a staple in the All-Star Game.

I think it'll play completely and you see more competitive stretches. You'll still get the highlights and trying to let dudes do things different than what they get to do during the season and that's cool too. I just never cared about taking the All-Star Game serious. How can you? It's a fun event that's for fans and players. It's not to be taken completely serious. It's also going to shorten the length of the game since 24 points isn't THAT out of reach for players to reach pretty quick for the 4th quarter. So we could see guys go a bit harder knowing that it's going to be a shorter game. All in all, awesome idea.