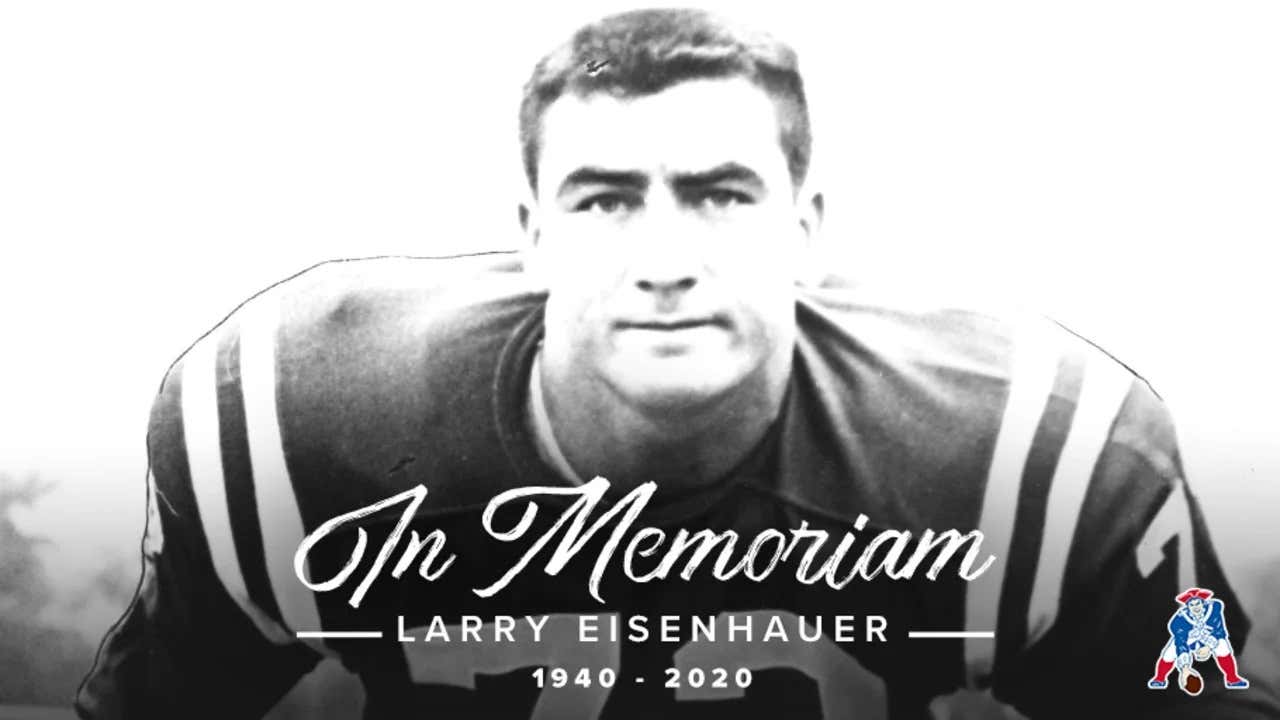 Patriots press release - The New England Patriots are disheartened to learn of former Patriots defensive end Larry Eisenhauer's passing on Wednesday, Jan. 29. Eisenhauer played nine seasons for the Patriots from 1961-69, was a four-time AFL All-Star selection, a three-time AFL All-Pro and a member of the Patriots 1960s All-Decade Team.

"I am deeply saddened to hear of the passing of Larry Eisenhauer," said Patriots Chairman and CEO Robert Kraft. "I had the pleasure of watching him play for the Boston Patriots in the '60s. Not only was he one of the best defensive linemen in the AFL for nearly a decade, but he was also one of the most colorful personalities this franchise has ever known. I think everyone who ever played with him had a Larry Eisenhauer story and loved to retell them at alumni gatherings. He was an AFL All-Star on the field, but made an ever greater impact in the New England community as a Patriots ambassador, always eager to volunteer for our many alumni initiatives. On behalf of my family and the New England Patriots organization, we express our sincerest sympathies to Larry's family, former teammates and the many friends who will mourn his loss."

First of all, guys who played in the old American Football League who were born in the 1940s die everyday. It's a sad fact of life. And not all of their deaths are blog worthy. I admit that. But this one is.

Simply put, if I could go back in a TARDIS to see any Patriots player from before my time, it would be Larry "The Wild Man" Eisenhauer. And not just in a game. One the practice field. In a nightclub. In an interview. Any place at any time doing anything.

Stories of him are legend, passed down to me by my older brothers. In fact, while I never really got to know what kind of a guy our father was because he died when I was nine, they tell me his favorite player was Larry Eisenhauer. And therefore I'm convinced he was the kind of guy I could've hung out with as an adult if the fates allowed us to.

Like Mr. Kraft said, the stories of Eisenhauer are the stuff of legend. He was like a 1960s Gronk, but with a nasty streak a hundred times longer than Gronk's when he was throwing Sergio Brown out the club. I have exactly two I will share with you now, the reason I'm blogging this great man in the first place.

The first is from the early days of the Patriots franchise when they a flat broke, fly-by-night operation. When they were practicing on school playgrounds and the workouts would get interrupted by the kids' recess and so on. This was during a time when, hard as this is to grasp today, every city had it's own kids TV programming instead of Nickelodeon or Disney. Think "The Krusty the Klown Show." Programs entirely produced by the local stations.

In Boston, there was one called "Rex Trailer," a cowboy who did rope tricks and sang songs and whatnot. Basically a live action Sheriff Woody. And he had a sidekick, an offensive Mexican stereotype named Pablo (played by an Italian) who was lazy and always wanted to take siestas under his big sombrero. It was a different time.

Anyway, with "Rex Trailer" looking for content and the Patriots desperate for any publicity they could get, the agreed to film a segment at Pats practice. And the idea would be that Pablo would take the ball and run through the Patriots defense to score while the early 60s local TV version of hilarity ensued. So they put a helmet and pads on him, he ran through the line, zigzagged through the linebackers, avoided tackles from 10 defenders. But there was one they didn't account for.

As Pablo got close to the end zone, The Wild Man came at him full force, lowered his shoulders and sent him airborne with a crushing blow. As the sidekick lay there in a twisted heap, everyone - teammates, coaches, TV crew - stood there trying to process what just happened, Eisenhauer stood over the body and screamed, "Nobody gets across OUR GOAL LINE! Not even a clown!!!"

In his 70s, reflecting with the wisdom of age, Eisenhauer gave an interview where he semi-apologized. "I'm kind of ashamed of it now," he said. "But I just couldn't stand to see anybody score on us if there was a chance I could stop him. He was slow, so it wasn't any trick catching him. ... Why give the guy a free touchdown?"

The second story takes place in an unfamiliar place for the early Patriots, the postseason. Actually the AFL Championship game in San Diego, against the Chargers. The Pats actually weren't very good, but 7-6-1 was good enough to win their division and get them into the playoffs. And they were a group who enjoyed the hell out of themselves off the field, so a few days in SoCal were right up their collective, hard drinking alley.

The hotel they were staying in had a bar with windows that looked right into the swimming pool, aquarium style. And every afternoon, synchronized swimmers in costumes would put on a Mermaid Show. Just before it started, Eisenhauer was drinking with his dad, who was an older, shorter, chubbier version of himself. They finished their drinks and Larry said, "C'mon dad, let's go." Where? "Swimming. The pool is open to guests for the next hour." The problems were 1) They didn't bring bathing suits. And 2) No it wasn't. But Eisenhauer the elder didn't know that. Which was the idea.

So as they left, the show started and a crowd gathered around the bar to watch. Until a couple of minutes in, a middle aged fat man in boxers went jumping into the middle of swimmers, followed immediately by a 6-foot-5, 250 lb rage monster in his underpants. Women in the bar shrieked while a couple of dozen mermaids swam away in panic, their nose plugs flying in all directions.

After security hauled them out and order was restored, Eisenhauer's dad turned to him and said, "That's a nice pool. But did it seem to you like people were staring at us?"

The end of the story is the title game, where the Pats had to face Sid Gillman's offense, the prototype of the modern passing attack. It was a slaughter. Their old school blitz-heavy schemes were utterly incapable of making a stop. It was like a WWI biplane dogfighting an F-14 and the Chargers won 51-10. Thankfully, one good story came out of it at least.

Now that I tell those again, it occurs to me I was wrong earlier. I wouldn't want to go back in time to watch this guy. Instead I wish he was playing now, in an age of cell phone videos and Twitter. He'd be perfect for these times and a million blogs would practically write themselves.

Hope you enjoyed the history lesson. RIP, Wild Man. Men like you pass this way but once.