Listen guys, I'm tired. This week has been an absolute drain for me. Despite all the excitement around the office, I feel like I can barely keep my eyes open. I honestly didn't think I was going to be able to make it through the day until I saw this video, which reinvigorated me beyond belief. Like, I don't even know why I hate them so much but I do. Look at these ass holes. 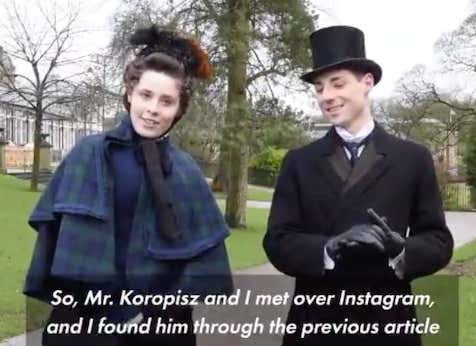 You met on Instagram but are living in the Victorian Era (June 20, 1837 – January 22, 1901(research))? That's not how that works. If you're going to live in the past...live in the past. That means no cell phones and no rubbers. If you do have sex it should be with the intent to have children and when they're born you have to work them to death on the farm. Those are the rules.

I guess I just have a short fuse for adults who act like kids. It's the same thing when I see people playing Dungeons and Dragons or Magic The Gathering. It's like no one told them they're being weird so they think it's okay. It's the families fault. If you see your kid going down that path, step in and put a stop to it. Tell them to ditch the accent and costume and start getting to know people as people, not as characters. It'll only help them in the future. Add these two to the list of things I hate.