If you've been a hockey fan for the last several years you're definitely aware of the branding of the National TV games on Wednesday Night. "Rivalry Night" on NBC Sports 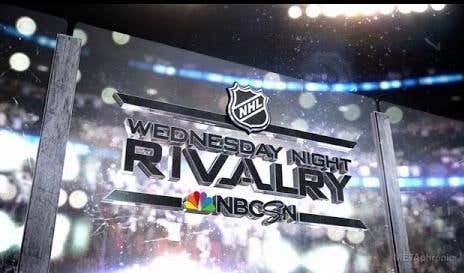 And sometimes the schedule actually works out and the network puts out Bruins-Habs, Pens-Flyers, Hawks-Blues, Sharks-Kings/Knights. Those are all great historic rivalries, but sometimes rivalries burn hot and other times they're dormant. Usually the rivalry only exists in the brains of fans who see the colors and the logos and remember Crosby fighting Giroux or Toews vs Backes or 100 years of blood being spilled between Boston and Montreal. The rivalry doesn't really exist in the chest of the guys currently wearing the sweater. We all know that. Other times the schedule doesn't work out and the NHL/NBC calls some random ass game between the fucking Preds and Caps and Lighting and Kings. It is what it is.

The problem is that the NHL can NOT market it's product effectively. Last night was the most anticipated random regular season game I can remember. Actual rivals with the Battle of Alberta. Two teams that fucking hate each other's guts. Two teams that are DESPERATELY battling for points because a 3 game winning streak in the Pacific might put you in first and any sort of losing streak puts you in danger of missing the playoffs. It was a MONSTER game and everyone in the hockey world knew it and yet...we got Kings-Lightning. A last place garbage team vs the least charismatic good team from the east while we have a BLOOD feud happening in Edmonton

And Rittich with the walk off stick toss to the moon

That game had EVERYTHING. If I was going to take someone who had never seen a hockey game from West Virginia or Chile or something and I wanted to show them what hockey was all about. Show them a game that would make them be a fan for life it would've been last night. PERFECT hockey game to market to casual fan. Mega stars, speed, emotion, great fans, violence, skill, competition and battles all over the ice. It was spectacular. It had a big boxing match type build up. Reality TV type drama. The NHL had a chance to grab the entire sports world for a night when not many other sports were going on and yet we, in America, we were stuck with Lightning and Kings and being forced to stream it illegally(supposedly) through reddit. That is a failure by the powers that be in the NHL and NBC Sports. I am sure there is some complicated explanation as to why they gave the national tv audience an inferior product, but I don't want to hear it. If you want to grow the game and have more fans sucked it this game should've been circled on the calendar for weeks. It should've been talked about all during the All-Star break. It should've been hyped like Vince McMahon was in charge and then…it should've been on fucking TV.

Hopefully the NHL can take this, learn from it, and get people ready for a War in April because that is what we want and if the playoffs started today…