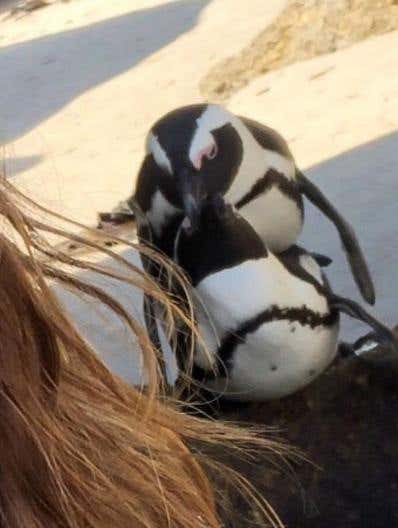 Jesus fucking Christ, Penguins. Get a room. We can't even have instagram models influencing in peace at the zoo without them getting their rocks off on a rock. How is she supposed to get promote flat tummy teas with this going on in the background? And poor Stephanie was made to feel guilty about this. Here was part of her caption.

I have just been informed that the penguins on Boulders Beach are under a lot of stress due to tourists trying to get too close. I feel guilty that I contributed to that and thought that because they weren’t reacting when I got close that they weren’t bothered by me. If you are considering visiting this spot, then please be mindful and ask guards for appropriate distances because no one told us any of the rules I’ve been messaged about since posting this. I will definitely learn from this for the future and I’m sorry to anyone affected by this post ❤️ ????

No no no NO. That is not the case at all. They don't look too stressed to me.  I don't care what the experts say. Those penguins wouldn't have stopped fucking if a meteor hit their beach. Why? Because they're a depraved and vile species. I am tired of penguin apologists out here feeling bad for them. Don't forget this blog from a few months ago

In his account, Levick described witnessing ‘gang rape’ and sexual abuse of chicks, according to The Sun which has seen a copy of the book.

Female penguins would be ‘pimped out’ with stones, but would sometimes run away with them after a courtship ritual, he said.

On top of that, Levick recorded instances of necrophilia – sometimes a year after one of the birds had died.

PS: Here are some pics of Stephanie because we all know that is why you clicked.