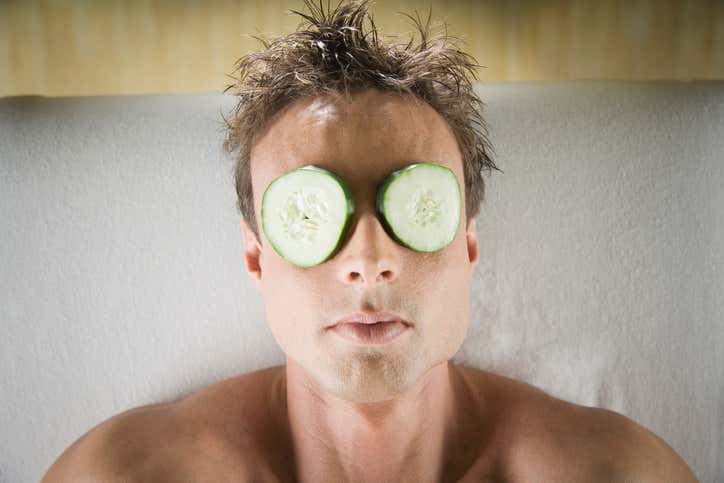 I decided to treat myself to a massage yesterday. I’ve only had a few in my life, but I felt like I was due for one. My body has been a little sore from all these gains I’ve been making, and I thought it could be a nice, relaxing Sunday without football.

I was talking about this on Barstool Radio Friday, but I find massages to sometimes be as awkward as they are relaxing. It’s common to joke that if a guy is getting a massage, he’s also getting a rub n’ tug. I wasn’t sure just how common it actually was. If you’re a guy getting a massage, are you basically just expected to also get jerked off? I had genuinely no interest in that. A few months ago on my most recent massage trip, the lady told me to “Dress down to your comfort.” I had no idea what that meant. What’s the appropriate amount of clothes to leave on that says “I’m not some Tobias Funke never-nude. But I also don’t want a hand job.” Ultimately, I felt that just my boxers was that sweet middleground. I debated telling her at the top, “Just so you know, I don’t want a hand job.” But thought she might find that insulting because that would mean I’m both assuming she’s a sex worker and also turning down her services.

Anyway, the massage place closest to my apartment where I’ve gone before didn’t have any appointments available for Sunday. So I fired up the old Google machine and found a men’s spa that seemed to be what I was looking for. The problem was they didn’t offer any packages that were just a massage. I either had to add a pedicure or a “body scrub.” I find the process of nail clipping to be very stressful and the opposite of relaxing, so I called to get more info on the body scrub. “They’re not gonna like shower me and shit, right?” I asked. The man on the phone said no, it’s just like lotions and stuff to get rid of dead skin. I figured they’d just rub it in during the massage or something.

So I booked my appointment and was ready to go, but I had my first sign of trouble. In all past instances, I’ve been given the option of a male or female masseuse. I always respond the same way. “Ehh, doesn’t matter ….. Well you know what, I guess a female is fine.” I don’t want to come off as an overeager creep and demand a female. But if I’m going to have my entire body rubbed down, I’d rather it be by a woman than a man. I think that’s fair. I wasn’t asked my preference on the phone, but figured maybe I could handle it when I got there.

Fast forward to Sunday. I’m a couple blocks away from the place when I get a text from a friend saying, “Wtf is this Kobe thing. This can’t be legit.” I took to Twitter, assuming maybe his account got hacked and posted something weird. Nope. Saw the news and then proceeded to walk around in a fog. Most shocked I’ve ever been over maybe anything ever. Definitely a moment you’ll always remember where you were. I wondered to myself, “Is this something I cancel my massage over?” I thought about it, but was basically already there and feared it was too late to cancel, so into the spa I walked.

I checked in and sat in the waiting area for a few minutes before my name was called. I was greeted by a small, Brazilian man who said he’d be taking care of me today. “Shit,” I thought. I asked to use the bathroom before starting and told myself, “It won’t be so bad. A lot of athletes have massage therapists that are men. I’m basically just a pro athlete in the locker room right now.”

He opened the door to the room, and I realized I was not in for a typical massage experience. He told me I’d start off with 15 minutes in this jacuzzi filled with soap and bubbles. He asked if I’d like any wine. I asked if it was complimentary. He said yes, so I took a glass of red. He brought that along with fruit and hershey kisses then left the room. So for 15 minutes, I sat in a bubble bath jacuzzi with a glass of red wine, fruit, and chocolates. I felt like a housewife trapped in a loveless marriage enjoying a night to herself while her husband worked late at the office.

One problem was trying to eat the Hershey kisses with my soapy hands. I had a fork for the fruit, but these proved to be more difficult. I was trying to unwrap them and then put them directly into my mouth without using my hands, but this was no easy task, as I ended up dropping one into the tub. Overall though, pretty relaxing 15 minutes. Can never go wrong with a jacuzzi.

The time was up and the masseuse, we’ll call him Enrique for the purpose of the story, returned. He laid out a table and told me to get on face down as it was time for the scrub. “Don’t you need me to dry off and put my boxers on?” I asked. “No, you have to be wet for the scrub,” Enrique responded. This is the moment I knew I was in trouble. At this point, I’m wondering if I have inadvertently found myself in a gay spa, or If I’m just overthinking things and that this was pretty standard for a spa. I arose from the tub fully nude and laid face down on the table, bare ass cheeks in the air.

Enrique proceeded to rub down my entire body, ass and all, with some scrub for 15 minutes. I tried to break the awkwardness with some small talk.

Me: “You hear about Kobe? Crazy.”
Enrique: “What happened?”
Me: “Died in a helicopter crash. Just terrible.”
Enrique: “Oh no! He was a friend of yours?”

“Wrong crowd,” I thought to myself.

The scrub down continued when he got to a weird bump on behind my shoulder, just above my armpit. Concerned, he asked, “What’s this you have here?” I shrugged it off and said, “Oh, not sure. I’ve had that forever.” Internally, I thought, “Better get that checked for cancer.”

Eventually, I had to roll over. Luckily, my junk was covered with a towel. Somewhere in the process of rolling over, that scrub got in my eyes. There was an intense, burning sensation I tried to fight off but couldn’t. I caved and asked for a tissue to wipe my eyes.

Throughout this process, I considered to myself “Maybe I can just imagine it’s a hot woman doing this to me.” But I realized that couldn’t work. Because what if I’m imagining Jennifer Lopez applying a body scrub to me and then I roll over with an awkward, half-boner? Can’t have that. So I just thought about nothing in particular and tried to clear my head until the time was finally up.

When it ended, he told me to shower off before the massage. He made it clear, “Make sure you get all the lotion off or else the massage will be very bad.” “Well, what the fuck is that supposed to mean?” I thought to myself. He told me he’d be back in five minutes and to be laying face down on the massage table with a towel covering me when he got back. So I then proceeded to take the most thorough shower of all time and get any last trace of lotion off my body.

I dried off and thought I might have a second to check my phone. “Maybe that Kobe news wasn’t real. Let’s see if it’s confirmed.” Just as I’m unlocking my phone, Enrique’s shadow appears outside the door. I scurry to the table and plop my body down as he’s walking in.

The 60-minute massage begins. For the most part, it was your average massage. He asked if I wanted soft, medium, or hard pressure and I chose medium. That was a mistake. About 10 minutes in, Enrique had me in a ton of pain. “Will he think I’m a pussy if I ask him to lower the pressure?” I decided I didn’t care what Enrique thought and told him “Less pressure, please.”

Throughout the massage, I wondered if he’d comment on my muscles. Not that I wanted him to per se, but thought maybe I’d get a “Wow, you are very muscular” out of him. Not the case. Maybe that would’ve made things awkward. It would’ve made me feel good though. Whatever.

I’m fighting a cold so I let out a couple of coughs. “Should I make a joke about the coronavirus? That’d be topical.” Decided against it. My nose started to run. Really could’ve used a tissue, but felt like I hit my tissue quota when I asked about the one for my eyes. Didn’t want to push it.

At this point, I’m just wondering how much longer is left. I’m now face up. I open my eyes to check the clock on the wall and see Enrique right over my face. We make direct eye contact. I close my eyes immediately and decide to leave them closed until this finally ends.

And that was that. I got out in such a hurry that I forgot my chain there, which I took off for the massage. So I have to go back today to retrieve it. Hope they don’t think it was a classic “leave-behind.”

So that was my Sunday. I’m still not sure if it was a gay spa or if I just have a great misunderstanding of what spas are. While I did enjoy the jacuzzi, I cannot say I will be returning there again. At least I didn’t get jerked off though.