Freddie Kitchens come on down, you are now on a coaching staff with The Clapper Jason Garret and Karma Bret Bielema! For a guy whose Wikipedia page must have broken records because nobody knew a single thing about when he got hired as HC of NYG, Joe Judge has put together a coaching stuff with some guys that have lived in internet infamy and doesn't give a fuck about all the LOL'ing by the people on the internet.

Which I am more than fine with since I don't know if Joe Judge even knows/cares that the internet exists. There are plenty of good football coaches that weren't great head coaches. But despite of whatever your Win-Loss record was, you don't get to sit in THIS chair unless you are a good coach at some level. 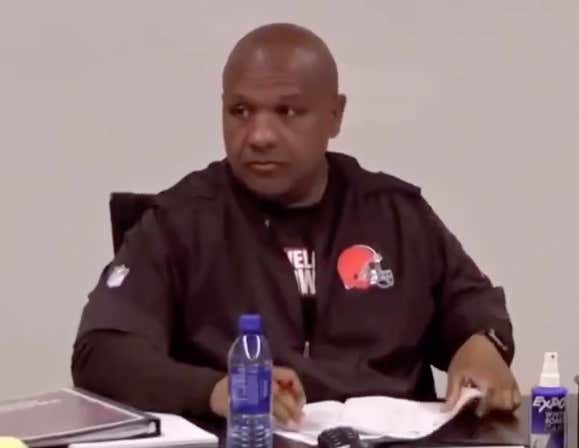 Okay, maybe bringing up the last guy to coach the Browns for a full season of hell wasn't the best idea. But Hue Jackson is much better acting as an offensive coordinator and calling plays than acting as the CEO of the coaching staff and leading a bunch of men into football battle.

Those puff pieces about Freddie Kitchens being well-liked and respected by his coaching peers and players couldn't have all been bullshit. He was probably just overwhelmed for a job he was underqualified for. Whom amongst us cannot relate with that? I'm not worried about Freddie Kitchens being unable to call a play that gets his team in the endzone from the 1 yard line in 6 tries as the head coach that also calls the plays. Instead, I am hoping he can find a way to keep Evan Engram on the field and Kaden Smith to continue to look like the beast he appeared to be during the last few games of last season as the goddamn tight ends coach. If he still sucks after getting a massive demotion on the org chart, I get to tee off on him for his blockhead decisions like Browns fans did last season. And if Freddie is good at a job that he was good enough at to get all the way to the big boy chair in the coaching room, I get to use this gem on the haters.

I don't know if it's because Dave Gettleman hasn't gotten behind a microphone in weeks, I have blind faith in Coach Judge because his name/philosophy are inspiring, being negative about all my teams may sports suck, or getting well-respected coaches in positions where they have thrived in the past that led to the getting them big time head coaching positions is a good thing. But I am more excited for this Giants season than I have been in years.

Oh yeah and this guy getting the 2nd year bump along with (PLEASE GOD) fixing his fumbling problme may have a thing or two to do with it.