AFTER Walter White’s death was finally confirmed in one-off special El Camino, fans thought that was the end of Breaking Bad.  But his on-screen son RJ Mitte has other ideas and wants to continue his dad’s drug dynasty with his own spin-off show.

Mitte, who like his character Walter Jr has cerebral palsy, believes his tormented character’s issues could turn it another sure-fire hit.

In an exclusive interview, Mitte said: “He is his father’s son in a way of his actions and his moralities of what he’s going to do would be right for his family.

“I think for us it would be a very hard life after what Heisenberg did to his family and I think that stigma would carry.

I'm in the camp that Breaking Bad is the greatest TV show in history, better than the Sopranos, The Simpsons, South Park, Seinfeld, Game of Thrones, whatever.  Needless to say, every time I see that there's going to be a new spin off of Breaking Bad spin off series, I get pretty pumped.

Eventually I'll find myself down a rabbit hole of "Best of (insert character's name)" on YouTube and after hearing that RJ Mitte might land his own spin off, I did the same: 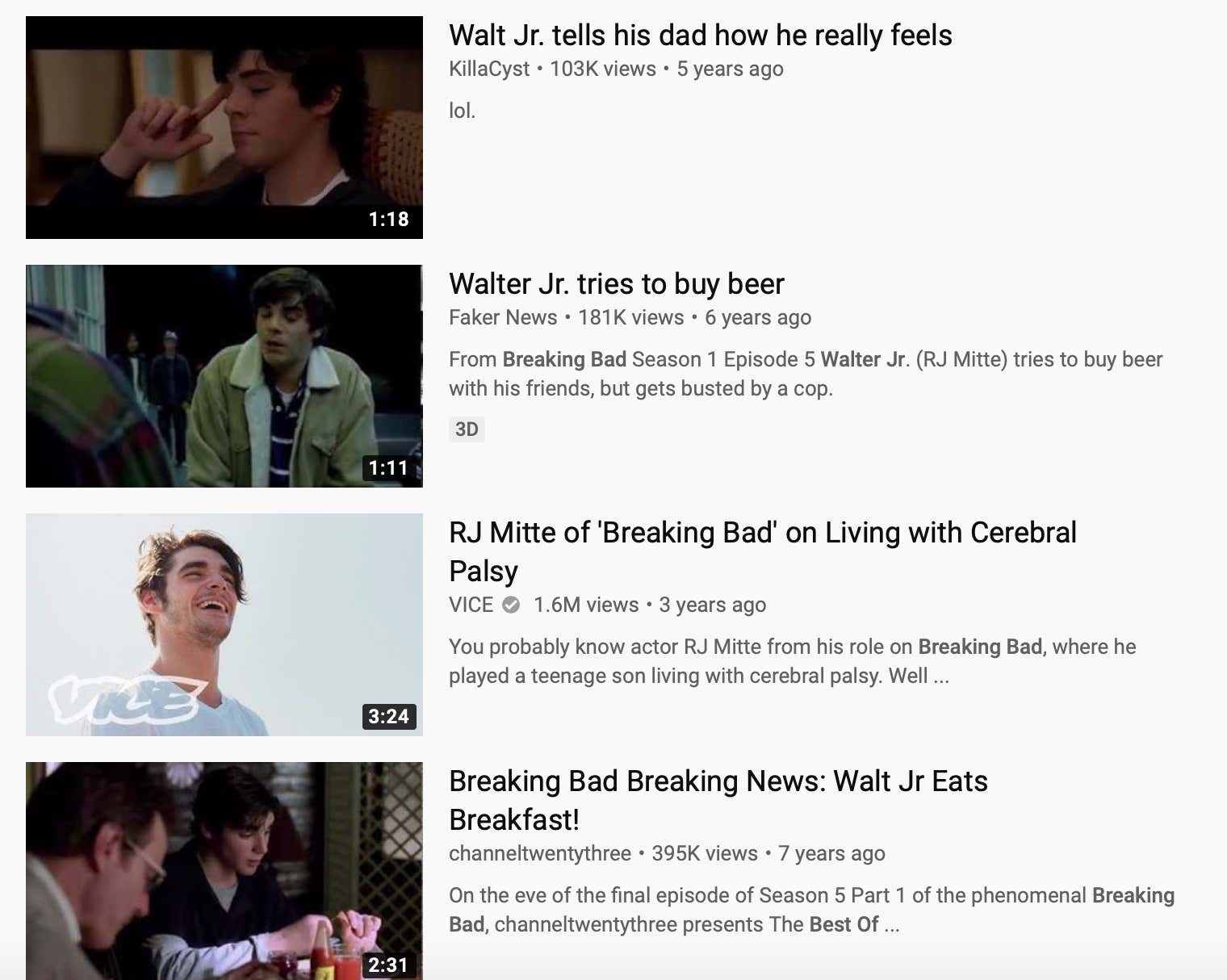 And low and behold, there's no "Best of Walt Jr." on YouTube.  This is the LEAST shocking result of all time.  It's too easy a joke to make and very much low hanging fruit, but all the kid did was eat goddamn breakfast and bitch about what kinda cars his parents bought him.  You're telling me that kid has what it takes to be a drug kingpin?  Absolutely fucking not.

BUT, and this is a very important 'but', In Vince Gilligan We Trust.  They should put that slogan on American Currency.  El Camino was good if not better, Better Call Saul has been awesome thus far and if anyone deserves the benefit of the doubt, it's Gilligan.  Even though he's totally trying to milk Breaking Bad for everything he can, there are still so many spinoffs he can make that at the very worst make for a watchable hour of TV during the shitty months of the year.

But a Walt Jr. spinoff?  If Gilligan's going to make it, he should make it after every other storyline is donezo and we are all suffering from Breaking Bad fatigue.  KFC said it a while back and I couldn't agree more - the next spinoff Gilligan needs to run with is the storyline of how Mike Ehrmantraut went from being a Philly cop who was seemingly straight as an arrow to becoming the crooked head of security for Gus Fring's drug empire and call it "No Half Measures".

Oh and speaking of Mike, Better Call Saul returns in a little less than a month and they just released a new teaser:

Looks like we're finally transitioning from Jimmy Gil, the dickhead attorney from Cicero, IL to Saul Goodman, the dude who eventually was a major cog in multiple illegal operations.  Gotta imagine Mike will be working up the ranks this season right there with him.

Can't wait, because February is the worst sports month of the year by FAR.