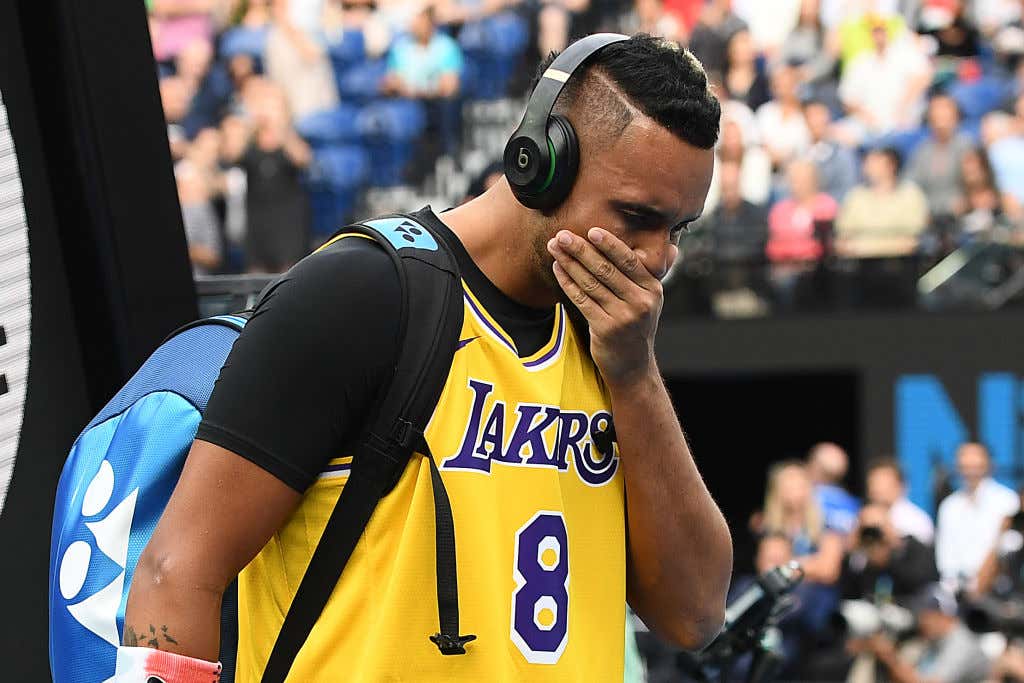 I woke up early this morning just hoping yesterday was a bad dream. There's just no way at the young, young age of 41 that Kobe Bryant was actually taken away from us. Just as horrible, so was his 13 year old daughter Gianna, along with several others. It was probably the single most shocking day in the history of the sports world. Kobe's inspiration spreads to all different sports and athletes across the globe. The tennis world for sure included in that group.

As the Australian Open enters its second week we had a clash in the fourth round between Nick Kyrgios and Rafa Nadal. It was probably Nick's biggest match of his career. What did he decide to walk out on the court wearing? A Kobe Bryant jersey. That rules so hard.

Ignoring the sponsors and what he's paid to wear while he warms up, Nick kept the Kobe jersey on as he fought through tears. That's an awesome tribute to me and I'm sure he tried to keep it on during the match. Nick is a gigantic fan of the NBA and has said several times wished he was good enough to play basketball professionally over tennis. Kobe Bryant was likely a huge inspiration of his with the Mamba Mentality and his greatness on the court over the years. Having to play in front of his home country crowd, against his rival Rafa Nadal, while also having to juggle this jarring news with the Australian bushfires still going on must have been impossible for him to handle. Credit to him, he played a great match, falling to Nadal in four very tight sets, with the last two being tiebreaks. He easily could have eased up after losing the first set but came right back and stole the 2nd. He was down a break in the 4th and fought to break back and stave off defeat, forcing a tiebreak. Can't fault the guy for the loss, Nadal was just better. Nick gave it everything he had.

Kobe was a big tennis guy. The idea of the individual sport always fascinated him. No teammates or coaches to rely upon. It was just something wildly different than what he grew up playing. He was seen sitting in Naomi Osaka's player box during her 2019 US Open title run. He had recently praised Coco Gauff as a phenomenon and raved about what she was doing at just the age of 15. In an interview with Sports Illustrated he compared the sport to how he was raising his daughters.

"Tennis has those qualities, those challenges. If you look at my daughters at home. I’m trying to teach them how to navigate through society as they get older. What are some of those sports that can really teach them? You said earlier, you’re out there on your own, you have to figure out, I just hit three bad shots, what those have to do with the next shot. I need to put those behind me and move on. Same thing with great shots—I just played a great set, won the first set. You can’t dwell on that, you have to move on to the next. So how do you navigate those inner emotions? Tennis is a great metaphor for that."

Just a few days ago strangely, Novak Djokovic gave this interview for ESPN where he was randomly asked about Kobe. To my knowledge he's never talked about Kobe publicly, but revealed here how close he was with the legend and that he viewed him as a mentor. Just the timing of all of this is insane.

Kobe's legacy truly touched everyone. An inspiration to countless souls across the globe. This is so sad. It's so goddamn sad. I'm at a loss for words. Thank you for everything you gave us Kobe.