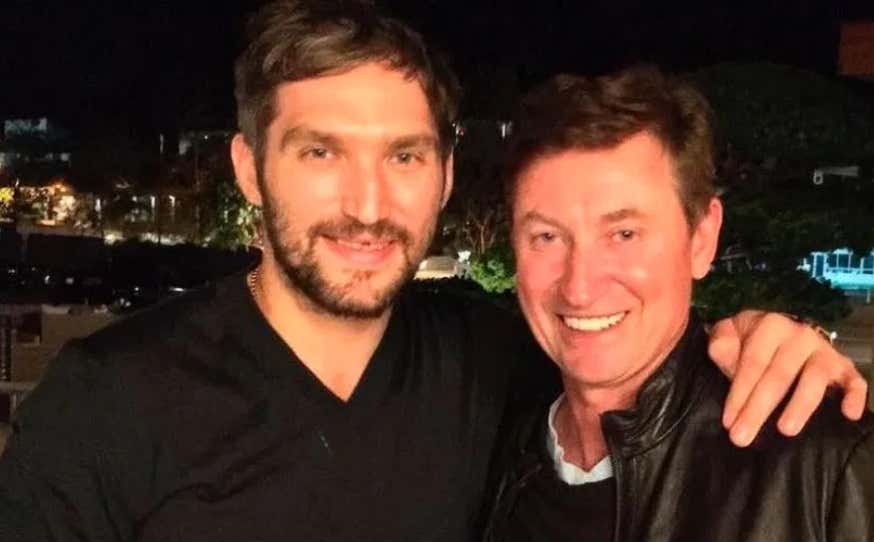 NHL - Wayne Gretzky said he continues to believe that Alex Ovechkin has "a real legitimate chance" to break his NHL record of 894 goals and wants a front-row seat when it happens.

"I'm a big believer that records are made to be broken," Gretzky told NHL.com on Friday. "What I accomplished, I'm very proud of. It's hard to do what I did, and it's really hard to do what he's doing now. But there's no question in my mind that he has a real legitimate chance of doing it. The two things that you need; you've got to stay healthy, and he's proven that over his career. He plays hard and he stays healthy. And, secondly, you've got to be on a good team -- and he plays on a good team.

"I think it would be wonderful for the game," Gretzky said. "Anything that's positive is always good for the game. I said jokingly to Sergey (Kocharov, Capitals vice president of communications) … I said I hope (Capitals owner Ted Leonsis) realizes that when I was chasing Gordie's record, Gordie and Colleen got to fly on the team plane. I hope I get invited to fly on the team plane because I would love to be at the game."

We've seen Gretzky talk about the possibility of Ovi breaking his goal scoring record before. And he's always been very nice and diplomatic about it. And now that Ovi is inching closer and closer, The Great One remains having a pretty good attitude about the whole thing. I think it's genuine too.

For starters, he probably didn't think it was going to be even possible, as goalies got SO much better since he played, it just seemed unfathomable guys would be able to consistently score like Ovi has. I'm not trying to be "that guy" who bashes old time sports, but goalies before...1994 had no idea what they were doing. So for Ovi to score like he is, Gretzky has to feel that if someone is going to pass him, there's nobody better.

Another reason is Gretzky doesn't have to worry about not being the GOAT. He is far and away the GOAT, probably of any sport ever. We all know the stat...even if he scored 0 lifetime goals, he'd still be the NHL leading in points. It doesn't make sense. He's the only player to ever record 200 points in a season...and he did it 4 times. What??? And don't forget the time he scored 50 goals in 50 games. No haha just kidding, he did it in 39. Less than half a season to put 50 in the back of the net. Bananas. So he can sit comfortably on his throne and watch his goals record get broken knowing he still wears the overall crown and Ovi is the best company he can possibly have on said throne

Every time Ovi scores I get out my TI-83+ calculator and start doing the math of how many goals per season he'd need to average to break the record.

Right now he sits with 692 goals. He needs 895 to become first all time, which is 203 more to go. That number does *not* seem high whatsoever. He's on pace to score 22 more goals this year (which would be a total of 56, crazy in it's own right), which would mean he would start next season needing 181 to break the record. He would only need to average 45.02 goals a game for 4 more seasons to break the record. Ok, fine, let's say he slows down and 45 is a bit high. 40 isn't though. That would mean 4.5 season. But when you really look at his numbers, I mean the guy had 51 last year and is on pace for 56 this year, who are we to say he will "slow down"? There's zero signs of that. Saying he can't average 40 a season is an insult. Shit, saying he can't average 50 a season for 3 seasons is irresponsible. Put up a 150 spot in 3 seasons and break the record well before 40 years old, there's no telling what this man is capable of.

There's no telling what is going to happen, but I 1000% believe if he wants to break it, he will. There's always circumstances out of his control though- a league lockout or strike, injuries, unruly fans, you name it. But right now it appears it is there for Ovi's taking in a handful of seasons. It's going to be an absolute blast and a half to watch.