You know whats the most surefire way to get me to jerk off into a banana peel?

Tell me not to jerk off into a banana peel.

Being perfectly honest I don’t even quite understand this though. As I write this blog I haven’t read the article yet. So I’m just kinda envisioning what I think goes on. Obviously your dick goes inside the peel as if it was the banana. That much makes sense. The 3 or 4 flaps wrap your dick into a cocoon. But do you just wrap your dick with the peel, and then wrap your hands around the peel and jerk the whole thing off? Like when you jerk off wearing a condom? You ever do that? There are two types of people in this world: those who admit they jerked off wearing a condom and liars. I did it when I just needed to practice condoms. How to open the package, how to roll em on, find out what it feels like, learn how to take em off and how to clean up etc etc. It’s like a dress rehearsal where you put on the costume practice your performance. What I learned was it takes a LONG time to jerk off while wearing a condom, and that it STINKS up the whole joint. The scent of cum and latex is just absolutely gross.

Now at this point in the blog, I’d like to update you with where my head is at. Remember the Kramerica episode of Seinfeld? When Kramer is leaning out the window of Jerry’s apartment building with his intern and he says “You know Darren, if you would have told me twenty-five years ago that some day I’d be standing here about to solve the worlds energy problems, I would’ve said you’re crazy… Now let’s push this giant ball of oil out the window.” That’s me. If you woulda told me 5 years ago I’d be back on the blog writing about jerking off with the skin of a member of the plantain family, I’d say you’re crazy. Now let’s read these Internet reviews of men who masturbate with banana peels.

Courtesy of JackinWorld, an entire website and database dedicated to those who love to jerk off:

Cue the music...A WHOLE NEW WORRRRRLD! A new fantastic way to fuck! And when you fuck that peel, you start to feel, that now I’m in a whole new world of fruiitttt!

We got the regular banana fuckers, and then we got the innovators. The mavens. The trailblazers. The guys who don’t just jerk off with a peel. The guys who turn it into something special.

Everybody reading this has stuck their dick in between the couch cushions. But a banana, inside a TP roll, in between your mattress and box spring? The DIY Banana Fucker! What a legend. But how about this cat:

Might as well zap it! You know what’s better than fucking a banana peel? Fucking a warm banana peel. May I maybe suggest heating it up with the Sous Vide? Let’s take our banana fucking into the 21st century.

But let’s not forget there’s a method to this madness.  You can’t just go fucking a banana peel all willy nilly. Just take it from this guy, the Bob Vila of jerking off with bananas:

Easy peasy. Just get out your duct tape, a protractor, an exacto knife, and you’re ready to start fuckin! Maybe you can use rubber cement and connect multiple peels so you can fuck a double banana? The possibilities are endless in the workshop!

But nobody, and I mean NOBODY, fucks banana peels like this last dude. Not since Doc Brown used banana peels to power the Flux Capacitor in the Delorean has someone been so innovative with the banana peel: 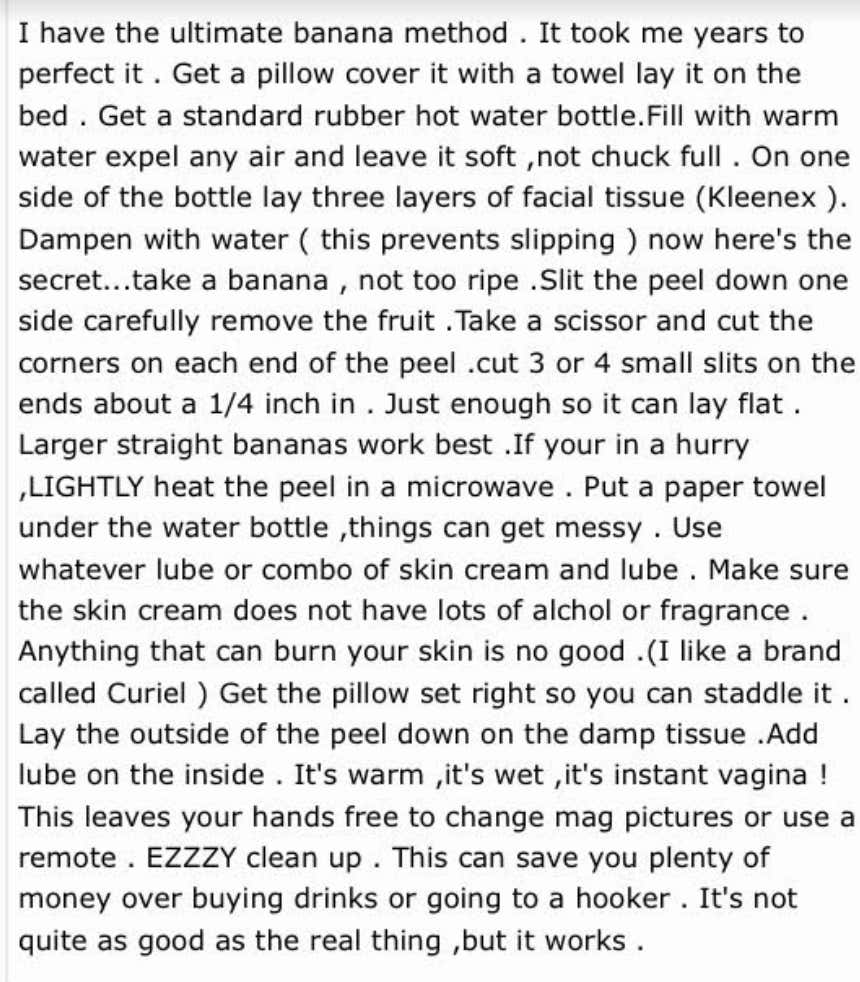 Bad news, girls! You've been replaced! We can go ahead and cancel women altogether. Power of the Pussy has been replaced by the Power of the Peel! All you need is a banana, a hot water bottle, a pillow, some paper towels, some lotion and you'll never have to leave the house. Never have to deal with relationships or drama. Just fuck that banana contraption until your dick is content.

But, Banana Fucker Beware, it’s not all sunshine and rainbows. Just take it from this dude, who STRONGLY recommends you never put your penis inside a peel:

Now come on back to the regular world. Leave Jackin World behind. Come back to reality. Here’s what I’ll tell you:

Should you jerk off with a banana? No, no you shouldn’t. You should really really not fuck food or anything that might have germs. But...BUT...I’d be naive to think that you guys out there aren’t gonna try this now that the seed has been planted. It’s almost like preaching abstinence to high school kids. That’s extremely naive and idiotic. Better to admit that kids are, in fact, gonna be fucking and so we should instead preach safe sex, right? So I’m not gonna sit here and say “Don’t fuck bananas.” Im gonna say “be safe.” My recommendations would be finding a fresh banana. I know the perfect ripeness of bananas is already a point of contention. Yellow vs brown. Soft vs firm. Maybe mix in some peanut butter. I dunno there’s all sorts of stuff you gotta worry about with bananas. So I’m just gonna say find a yellow banana, slightly brown, NO black spots. Inspect your peel for any insects. Clean up afterwards. Maybe use those wipes that you get when you're eating buffalo wings to scrub it down after.

Me personally? I HATE bananas in general. I wont eat em, let alone fuck em. No oral sex. No penetration. Not no way, not no how. If you wanna talk about fucking watermelons, get at me, I'll stick my dick in one of those.