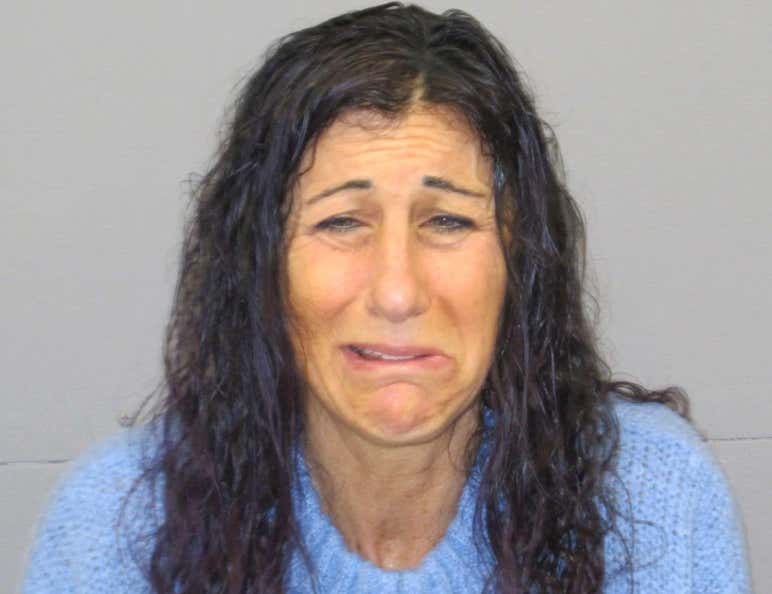 My goodness gracious. Need I go on. Are you convinced that's the face of the Parking Lot Pooper yet? Oh you're not? Then let us go on....

NY Post - A Massachusetts woman was busted for allegedly turning a store parking lot into her own personal potty — pooping there a staggering eight times in roughly a month.

Dubbed the “Parking Lot Pooper,” Andrea Grocer, 51, of Ashland was allegedly caught dropping trou near the Natick Outdoor Store on Wednesday morning after she was nabbed on camera in the act, according to metrowestdailynews.com.

I will say this in her defense- at least she found a place she was comfortable pooping in public. You know how hard it is to find a public bathroom that you don't mind pooping in? Almost impossible. I actually feel my insides and intestines develop a brain of their own and sometimes downright refuse to poop in public. They just survey the scene and decide "nope, not gonna do it here" and then put up a wall and refuse to poop.

Not this lady though. She found a parking lot she was happy with and made it her own personal pooping palace. People would DIE to have that sort of comfortability, and she was doing it outside in a parking lot, no less! So say what you will about her, but you can't deny you are jealous. Here at Barstool we have like 3 toilets for 300 employees. We have already outgrown this office like we did to the last one. It's madness. I would kill to have a little outside corner I could drop trou and drop a load without a care in the world. That's the gosh darn dream, brother. So big props to Andrea Grocer.

And not for nothing, this lady is a saint! Do you think her lawyer would lie about such things? For sure not....

At Grocer’s arraignment Wednesday, her lawyer called her a “pillar of the community” who works full time.

A pillar of the community for Pete's sake! If the worst crime she committed was finding a piece of happiness and solitude then lock her up. Otherwise, let her feces fly like a unicorn in the wild.

PS: I used to do a mug shot hall of fame, and she is a strong nominee for this year's crop. Not great, Bob. Not great!