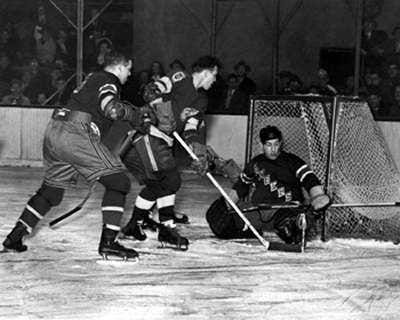 The New York Rangers are boat raced, disgraced, and as everyone involved wants to hide their face, following a 15-0 beatdown at the hands of the Detroit Red Wings at the Olympia Stadium. Ten different players score goals for the Red Wings, led by Syd Howe’s hat trick. The 15-0 Detroit win is the most lopsided game in NHL history. It would be the start of a 21-game winless streak for the Rangers stretching into the following season.

It was just four years earlier, that the New York Rangers stood proud atop the hockey world, winning the Stanley Cup for the third time. They remained playoff contenders the next two seasons, but as players were leaving to fight in World War II, the Rangers territorial disadvantages became prevalent. Where is the Toronto Maple Leafs and Montreal Canadiens had a deep pool of players to claim, few hockey players existed in the metropolitan area, leaving New York to pick from the scraps.

As late January arrived, the Rangers were languishing in last place at 6-22-1 under coach Frank Boucher. They were coming off back-to-back wins over the Boston Bruins and Toronto Maple Leafs when they skated into Detroit to take on the Red Wings. The Wings were sitting at 12-11-5 under coach Jack Adams as they looked to win a second straight Stanley Cup. Things did not start that bad for New York, as Center Murray Armstrong scored the first goal at 2:48 while Bill Quackenbush made it 2-0 at the 18-minute mark.

The score remained 2-0 in favor of Detroit until the middle of the second period when the roof caved in on the Rangers as the Red Wings scored five times to stretch the lead to 7-0. Things only got worse for Rangers goalie Ken McAuley in the third period as the Red Wings added another eight goals to set the record at 15-0. All three of Syd Howe’s goals came in the third period, as ten different players lit the lamp for the Red Wings. In total, Detroit fired 58 shots on the hapless McAuley, who managed to make 43 saves as his team suffered their humiliating 15-0 defeat. The Rangers, meanwhile, managed to get just nine shots on Connie Dillon.

The loss would be the sign of bad times to come for the Rangers, as they would not win another game during the 1943/44, season posting a record of 6-36-5 that ranks among the worst in NHL history. The Rangers were outscored 310-162 during the season as Ken McAuley’s 6.24 Goals Against Average is by far the worst in the history of the league. The Rangers 15-0 loss would be the first of a 21-game winless streak that stretched into the start of the following season, with the team going 0-17-4 before beating the Red Wings 5-2 at Madison Square Garden on November 11th.