(source)–According to a forensic analysis of Bezos’ phone, which The New York Times reported on Tuesday, the crown prince sent Bezos a message on WhatsApp in November 2019 that appeared to be a photo of Sanchez along with a caption: “Arguing with a woman is like reading the software license agreement. In the end you have to ignore everything and click I agree.” That meme, frequently accompanied by photos of different women, has found life in aggressively misogynistic corners of the internet, such as so-called men’s rights groups.

Bezos’ relationship with Sanchez didn’t become public until January 2019, when the National Enquirer published leaked messages and photos the couple had sent each other. At the time Crown Prince Mohammed reportedly taunted Bezos, the Amazon CEO was in the midst of a divorce from his wife, MacKenzie, and was already dating Sanchez. 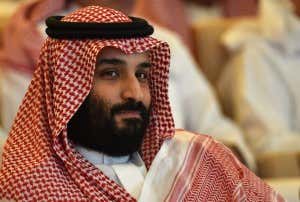 (unrelated, but the Prince kind of looks like Ricky Williams to me)

We talked about this on Chicago Dogwalk back in June. Crazy fucking story about how The Crown Prince of Saudi Arabia didn’t like that Jeff Bezos’s paper, The Washington Post was, you know…telling people that the Crown Prince had a journalist MURDERED for speaking out against Saudi Arabia. He went straight to the top and I guess now he taunted Bezos with memes about women while threatening to blow up Bezos marriage and life by going public with information about Bezos’s girlfriend Lauren Sanchez. It just goes to show you that nobody is safe in this day and age. Technology is so powerful that even the richest man in the world can be hacked, blackmailed, and compromised. Bezos could’ve had the best cyber security money could buy. All the best encryption in the world. It didn’t matter. That is why he is only the #2 internet mogul. He didn’t have the ability to fight the next war. He didn’t have the vision to know what he needed. Only one man has taken the necessary measures to win the meme wars of the future…David Portnoy

I don’t care if the Crown Princeor Kim Jung Un or Putin comes knocking. Nobody will ever meme Portnoy(again) with compromising videos. That is in the past. Not on Vindog’s watch.

PS: The Dogwalk ep on Bezos vs Saudi Arabia here