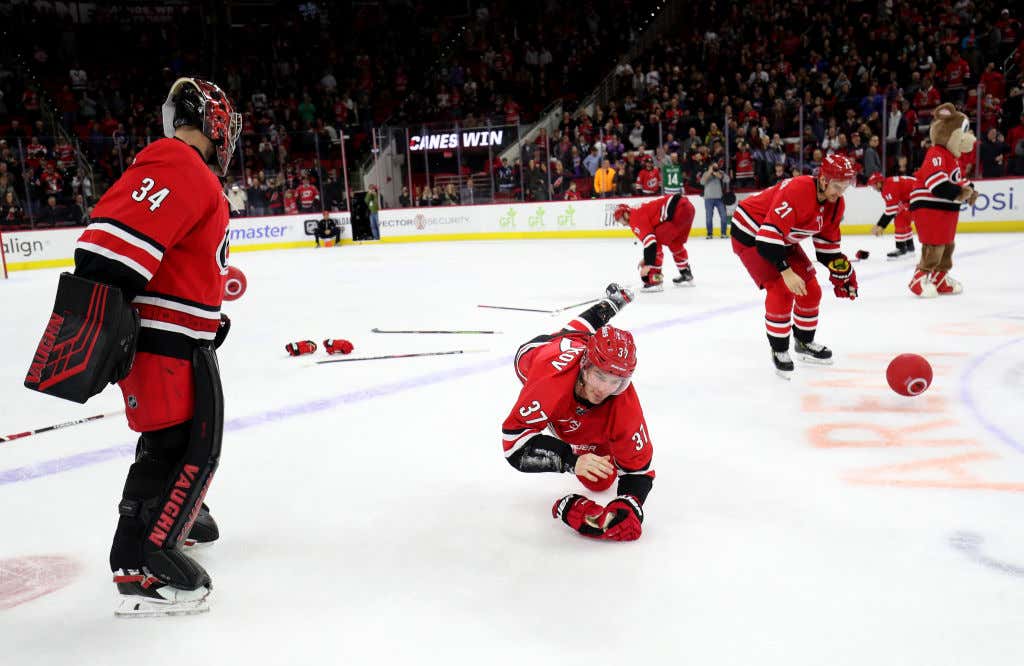 We've reached a point where nobody is ever allowed to say anything remotely negative about the Storm Surge in Carolina unless you want to run the risk of getting OK Boomer'd to death. It doesn't matter that they're making a mockery out of the game. It doesn't matter that olde time hockey guys like Eddie Shore are rolling in their graves right now over this. If you say anything about the Storm Surge besides "OMG this is like literally everything", you're a boomer. It's fucked up but that's the world we now live in.

But after their 4-1 win against Winnipeg last night, the Carolina Hurricanes might have slipped up. Because now we've got another cheating scandal in sports on our hands here.

Last night's Storm Surge included a quick round of dodgeball. Now if I were the Jets, I'd want to kick all of their asses for having the balls ready to go last night as if they didn't even once anticipate losing that game. But that's besides the point. After their silly little viking clap that makes no sense at all, they got a round of dodgeball in.

Seems like some harmless fun, right? Well think again because if you take a closer look here, you'll see that the Carolina Hurricanes clearly have zero regard for the rules and are operating well beyond the line of fair play.

Keep an eye on Nino Niederreiter here. The ball clearly hits him in the shin/top of the skate tongue. Under the ADA rules, Niederreiter should be out and cannot return to play unless somebody else on his team catches a ball. But instead, Niederreiter proceeds to stay in play and gets another throw in. Clearly this is against the rules, clearly this is cheating, and clearly the Carolina Hurricanes don't give a shit because rather than hide the fact that they're a bunch of cheating jerks, they blast this shit out on their Twitter account.

To be that open and brazen about breaking the rules like that should be an enormous red flag to the league. Because if they're willing to cheat in a post-game dodgeball match, chances are they'd be willing to cheat during the actual games themselves. Are we just going to sit back and allow this to happen? I sure as shit hope not. Justice needs to be served and the only punishment worthy of a crime like this would be a 1-year ban from the Stanley Cup Playoffs. Does that coincidentally open up a wild card spot for the Flyers to jump into?

Perhaps. But that's just a sweet little side dish to enjoy after the main entree of justice.