ICYMI, last night Yankees fans came out in droves wanted me crucified for being the only one to leave Derek Jeter off my Hall of Fame ballot:

Not kidding, my mentions have never exploded like they have in the last 16 hours or so.  It’s kinda funny; I was sitting on my couch watching some little rat dude try to get ahold of The Precious in Lord of the Rings on Netflix (movie stunk btw) while successfully trolling an entire fanbase over THEIR precious.  Like holy Hell do Yankees fans love Derek Jeter.  Kinda crazy to me that a fanbase so hellbent on victory has such an affinity for a dude who was the very definition of mediocrity, but I digress.

It even got to the point where other David Williams were getting assholes coming at their necks online too:

Fucking psychopathic Yankee fans.  Jesus Christ.  How many of these guys wish they had gotten a gift basket from Jeter?  100% of them, guaranteed, which is ironically higher than his 99.7% Hall of Fame vote.  Ha ha ha!

Anyways, like Derek Jeter takes pride in not being able to field a ground ball 3 feet to his left, I take pride in my trolling abilities, and last night was my Magnus opus.  I have people wishing I’d get skinned alive in front of my family and dog.  But as much as I love what I had consecrated last night, I also have at least some semblance of a conscience.  I saw this tweet… 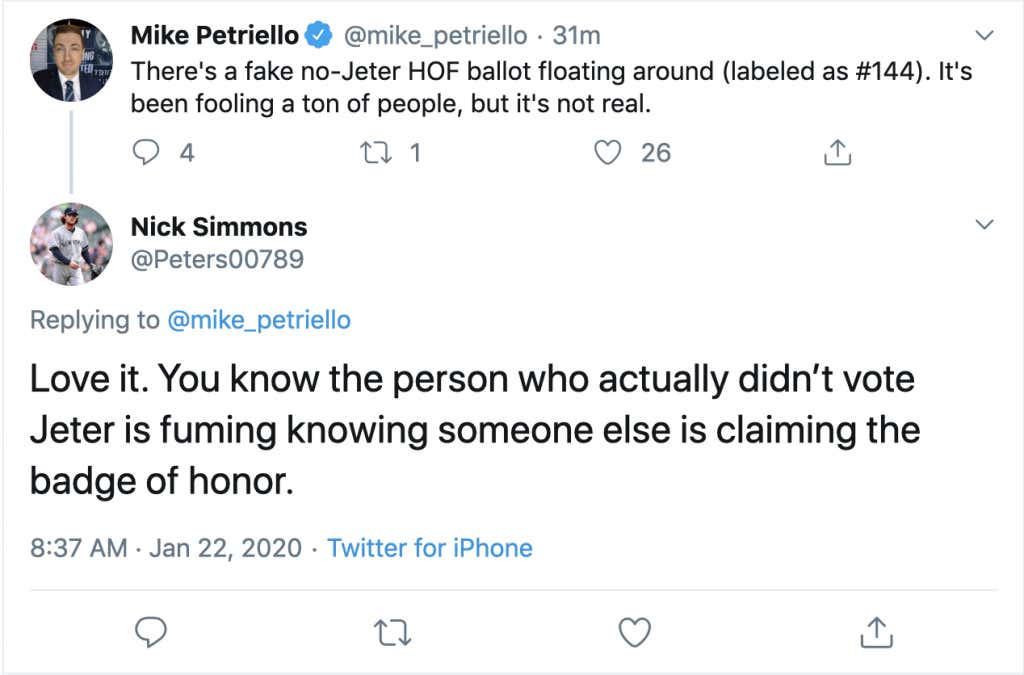 …and wondered to myself if I am guilty of stolen valor?  I mean, I know I’ve been shit talking Jeter non-stop in this blog so far, but he absolutely, without question should have been a first ballot Hall of Famer.  Unanimous?  That’s a weird argument.  I don’t think he would have been close to the household name he was if he spent his entire career in Oakland or *gasp* the South Side of Chicago, but he was blessed to have been drafted by the Yankees so the media could suck him off non-stop.  His accolades, both personal and team, speak for themselves.

The *one* excuse to not vote for him is if you think a borderline player has such a strong case and the ballot is so strong that you want to save your vote for your other choice.  That is something every single Yankees fan should live with.

But the one dude, whoever he is, that didn’t vote for Jeter is either

A) a coward of the highest order if he doesn’t show his face or
B) someone trying to do what I did, only for real

If it was in fact B, whoever the non-voter was probably wants me dead more than the entire Yankees fanbase combined right now.  Like this guy was probably beating his dick raw last night after he saw Jeter was one vote shy of unanimous selection.  It was going to be his 15 mins of fame and an unintelligent, ugly, borderline alcoholic White Sox blogger from Chicago who can’t walk and chew gum at the same time stole 100% of his shine.  You hate to see it.

So here’s me extending an olive branch to the dude who didn’t vote for Jeter.  Come out of the closet, show your face, give your explanation, and the next time you’re in Chicago, beers on me at the Declan’s back table.  Talk some baseball and let me pitch you on the White Sox winning 5 straight World Series titles.  From one troll to the other, I would be sorry if I did in fact steal all of the credit for your master plan.  Just have to show your face first, and promise to cross me off your list.