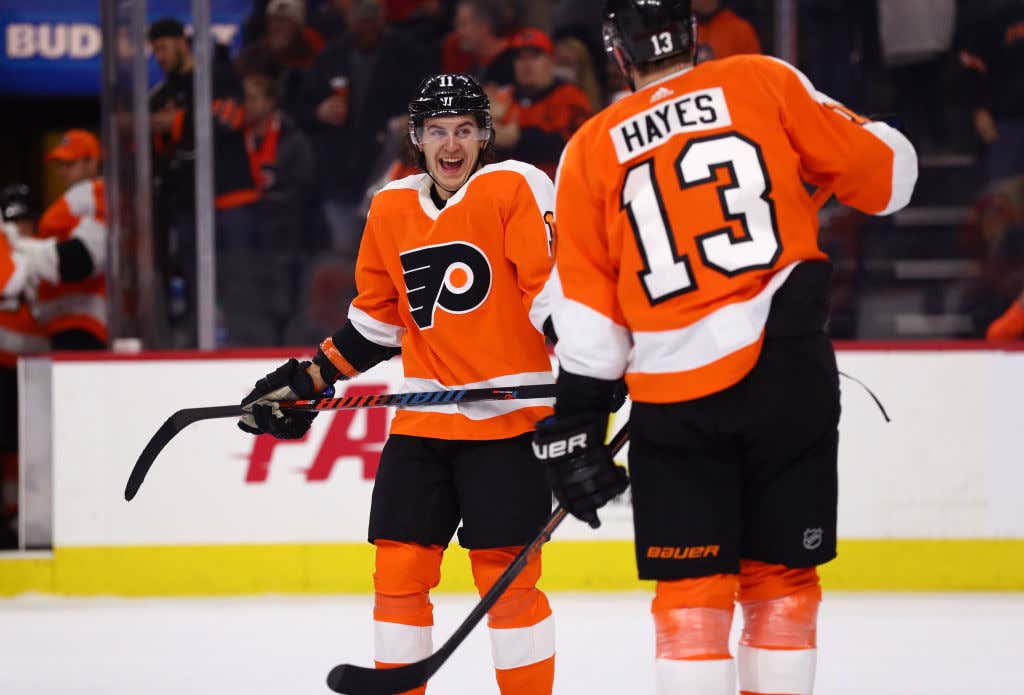 Mike Milbury hates the Philadelphia Flyers men's professional ice hockey team. Why? I haven't the faintest idea. But there are plenty of folks out there who hate the Flyers just because they're the Flyers, so I guess this isn't anything unique to ol' Mikey Boy. Does it get a tad annoying when he's on the broadcast and constantly talking shit about the Flyers throughout the entirety of the game? I mean...I guess a little bit. But for the most part, it's a glorious ride to be apart of because we can all be happy whenever Mike Milbury is upset. And after Justin Braun sniped his empty netter from about 180 feet down the ice, poor wittle Mikey almost broke down in tears on the broadcast.

The "Ughhh" heard 'round the world. Poor, poor Mike Milbury. I honestly feel bad for the guy. I feel bad for everybody who was at that game last night. These people all went to the Wells Fargo Center with the expectation of seeing a great hockey game between two interstate rivals. But all they got to experience was a good ol' fashioned shit pumping. The haters, like Milk Milbury, simply couldn't contain their disgust.

Now if the Pittsburgh Penguins had any shred of integrity as an organization, they'd offer a refund to every and anybody who was in attendance last night. I'm not sure if you guys have seen ticket prices for NHL games these days but it's not like these people showed up to the Farg with their leftover lunch money. It would be like paying money to go see a new Batman movie in theaters except in this particular rendition of Batman, there's not a single villain. It's just Batman running around Gotham being super dope and running into zero conflict along the way. That movie would suck ass, right? Well the villains couldn't get a single puck past Brian Elliott last night so it's essentially the same thing.

Luckily the Flyers were there to pick up the slack in the entertainment department. You had Sean "The Most Underrated And Under-appreciated Yet Also The Best 2-Way Center In The Game" Couturier delivering this crispy apple to Jake Voracek to open up the scoring in the 2nd period.

We might have to work on that nickname a little since it doesn't necessarily roll off the tongue, but it's a good place to start. Either way, what a feed. Through traffic, right on the tape, and then Jake is there for the forehand-backhand finish. And then after that, we had Travis "The Rat King" Konecny also delivering a dime of his own, with Jimmy van Reemer there to stuff home his 14th of the season.

Travis Konecny might be the CEO of FedEx because that was a perfect delivery. Great job by JvR to get a step on his man and then a beautiful dish from the Rat King. Thing of beauty right there, folks.

But unfortunately, art is very subjective. And what may be beautiful to some might not have the same impact on others. So for all the knobs out there like Milk Milbury, last night's game was an excruciating 60-minute ordeal. Oh well, too bad.

- I know we like to make some jokes here on the interwebs about Kevin Hayes being the greatest hockey player of all time, but this was one of the silkiest displays of penalty killing I've seen in some time. Kevin Hayes and those magical mitts of his was able to kill off nearly 20 seconds of the Penguins' powerplay just by being a sauce god out there.

- If anybody was wondering how much chill Gritty has, the answer is zero chill. Not a single ounce of chill whatsoever.

- I hate to end this blog on a sour note but we do need to discuss something here. And that something is the "Crosby Sucks" chant that always rings out at the Wells Fargo Center whenever Sidney Crosby is in town.

It needs to stop and it needed to stop a while ago. Listen, at some point you just need to realize that it is totally misguided energy. I mean not only does Sidney Crosby not suck (I believe the 3 Stanley Cups, 2 Conn Smythe Trophies, 2 Hart Trophies and 2 Olympic Gold Medals speak for themselves), but he's also scored more goals against the Flyers than any other team in his career. So if you're chanting "Crosby Sucks" to try to throw him off his game, it's clearly not working. If anything, it has the total opposite effect and it makes him stronger. But there are easier targets on the Penguins to go after. Start a "Malkin Sucks" chant and he'll lose his goddamn mind. Start a "Letang's A Bitch" chant and he'll lose his goddamn mind. I'm not asking Flyers fans to start cheering for Crosby, but maybe just ignore him entirely and let's start going after someone new. I think anybody with at least half a brain would agree.

Greasy win for the boys right before heading into the break. Now they have 9 days off and will come right back out of the break with the Penguins again on the 31st. I'll set the o/u on Letang minors at 2.5.