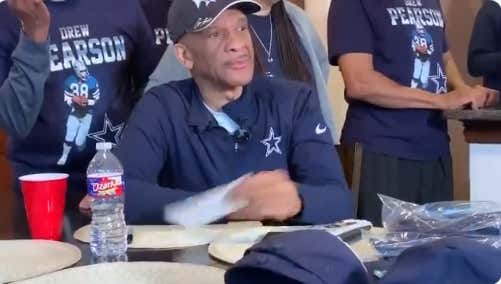 Last week I wrote about the heartbreaking and yet tears of Drew Pearson as he was passed over for the Pro Football Hall of Fame.

His sorrow was both understandable and justified as he is the only member of the 1970s All Decade Team not enshrined in Canton. And as I mentioned, here is where he finished in the all time rankings at the time of his retirement in 1983:

Plus, him getting the news surrounded by his family and realizing it's probably the last shot he'll ever get was a genuinely tough moment for any man with his resume to bear. So, like I said, I couldn't imagine anyone not feeling sorry for the poor old guy.

But that's because I overlooked one thing. I forgot that Terrell Owens exists.

Holy moly. This is Obi Wan being reduced to a pile of dirty rags by his former pupil. Drago sending Apollo out of a ring in Vegas with a sheet over his head.

And if you're wondering why these two hate each other so much that Terrell Owens just committed elder abuse the likes of which you'll only see on a "60 Minutes" segment about a crooked nursing home:

… then that probably means like me, you forgot all about his very forgettable career in the Indoor Football League. From Total Pro Sports:

Owens is referring to 2012 when Pearson was the general manager for the IFL’s Allen Wranglers. Owens had refused to play in two road games and missed out on a mandatory team event. He was soon cut. Pearson later stated he needed to better handle himself “outside the lines.”

Revenge is a dish best served cold. And no one puts it on the plate fresh from the freezer like Owens does. So if you're looking for a little of the Milk of Human Kindness during a sad moment late in your life in 2020, don't go around expecting T.O. to show up to work in 2012. And for sure don't try to campaign for induction to the Hall by putting Owens' name on your lips because he will curb stomp your senior citizen ass, then go home and sleep like a baby.

And the biggest suck of it all is that there's nothing Drew Pearson can do but take it. Owens' is enshrined for all eternity and he isn't. He'll be getting hummers in his yellow jacket tonight and Pearson will be home with his family and not much else to show for his career but a Super Bowl ring. In the dog eat dog world of indoor pro football, no one ever said life was fair. Sad, but true.