So over the weekend, my esteemed colleague Brandon Fuckin Walker tweeted this out, praising the Spalding/Spaldeen pink ball and discussing the best balls from our childhood. I say "our" childhood because despite his overgrown ogre stature and the SLEW of children he's churned out, Brandon Walker is only 41. So while we probably never shared a playground, we are still contemporaries. I dove into this discussion, because its a great topic. Credit to BFW. Its a classic Barstool discussion topic, and I wanted to participate:

A little back and forth. A little repartee, if you will. Pink vs Blue. Wrong vs Right.

And so Brandon Walker began the conversation, I furthered it, adding my own list of best balls. To be honest I fully expected BFW to turn this into a blog as well, but Monday rolled around and not only was there no balls blog, he was walking around the office looking like a fucking serial killer, staring me down, clunking around in those size 15s with a look of pure hatred in his eyes:

This was such a non issue in my book I couldnt even begin to guess why he was throwing so much shade my way. I know I'm just diving back into the blog realm but what in the fuck has been going on around these parts? What kinda clownshow operation are we running? Somebody put a tent on this circus. Back in my day this was how it worked. A tweet becomes a discussion. Banter becomes a disagreement and an argument. That debate and the differing viewpoints become a blog. Perhaps we have dueling blogs. Then a podcast argument. If we've really struck gold, maybe a long lasting catch phrase comes out of this. Or BFW adds to his already legendary persona he's growing here. Maybe a piece of merch comes out of this. The 360 degree lifecycle of Barstool content. From a single idea, to 140/280 characters, to a blog, and next thing you know we are grooming a rivalry and inspiring arguments and everybody wins. We spend an afternoon reading each others thoughts and talking a trip down memory lane to remember our favorite nostalgic moments. The amount of things that have spawned from that exact process is staggering. The best example is the pizza empire of Dave Portnoy. A single voicemail posing the question of eating pizza every meal for the rest of your life turned into the burrito vs pizza debate, which turned into the pizza burrito challenge with Dan and Dave: 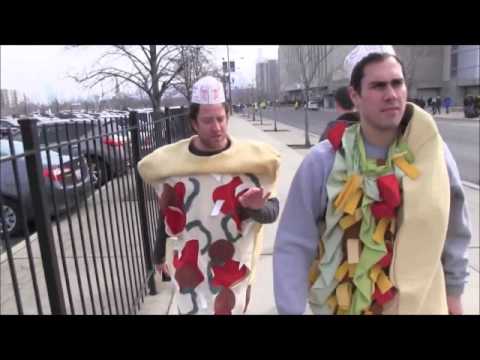 Which in turn leads to pizza reviews, Dave becoming the Pizza King, Frankie Borrelli becoming his right hand man, the One Bite App launching, and Barstool sports owning the world of pizza. Thats nothing to get upset about. Thats the beauty of the blog cycle and good for business, baby. Yea I used your tweet, you was using it wrong. You made it a hot line, I made it a hot song.

Who knows, maybe Brandon Walker could have become the King of Balls had he taken this and ran with it. Instead he got upset and said I ball cucked him. I'm sorry, Brandon. I'm sorry someone had to bite the bullet and write this awesome blog taking a trip down memory lane and reminiscing about the balls we used to play with and the games from our childhood. Gym class and recess and Little League and CYO hoops and all the stuff we all grew up on. If you dont want to write it, I suppose I will. Its like I have to do every goddam thing around here. So lets begin:

1. Brandon Walkers', which now reside in my front pocket - my favorite balls ever. The pair I just newly acquired from this M M**. Ball cucked, indeed, Walker. If you want them back, ask nicely and I'll consider it.

2. The Sky Bounce Blue Ball - the root of this whole fiasco. The Blue Sky Bounce raquetball. 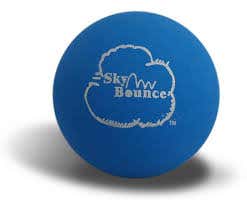 I was astounded to find out how many people find the pink Spaldeen to be superior to the Blue Ball. I mean the Blue Ball is ICONIC. The official color of a true racquetball. Rocky Balboa walking down the street bouncing that thing (His was darker than the usual blue I suppose but it sure as shit wasnt pink) playing Butts Up on the playground. A fresh canister of 3 blue balls from Penn. The perfect "POP!" sound when you pegged somebody right in the ass (pause). Hurt just enough, left a mark, but wasnt too painful. Playing Off The Roof, handball, and just bouncing that sucker off the wall when you were bored. To me, the best ball ever. I will readily admit the pink Spalding ball is basically identical and the color is, for the most part, the only difference. But Blue is also the best color so the Blue Ball > Pink Ball. Facts

3. The Tennis Ball - If I'm being honest, this should probably be number 1. 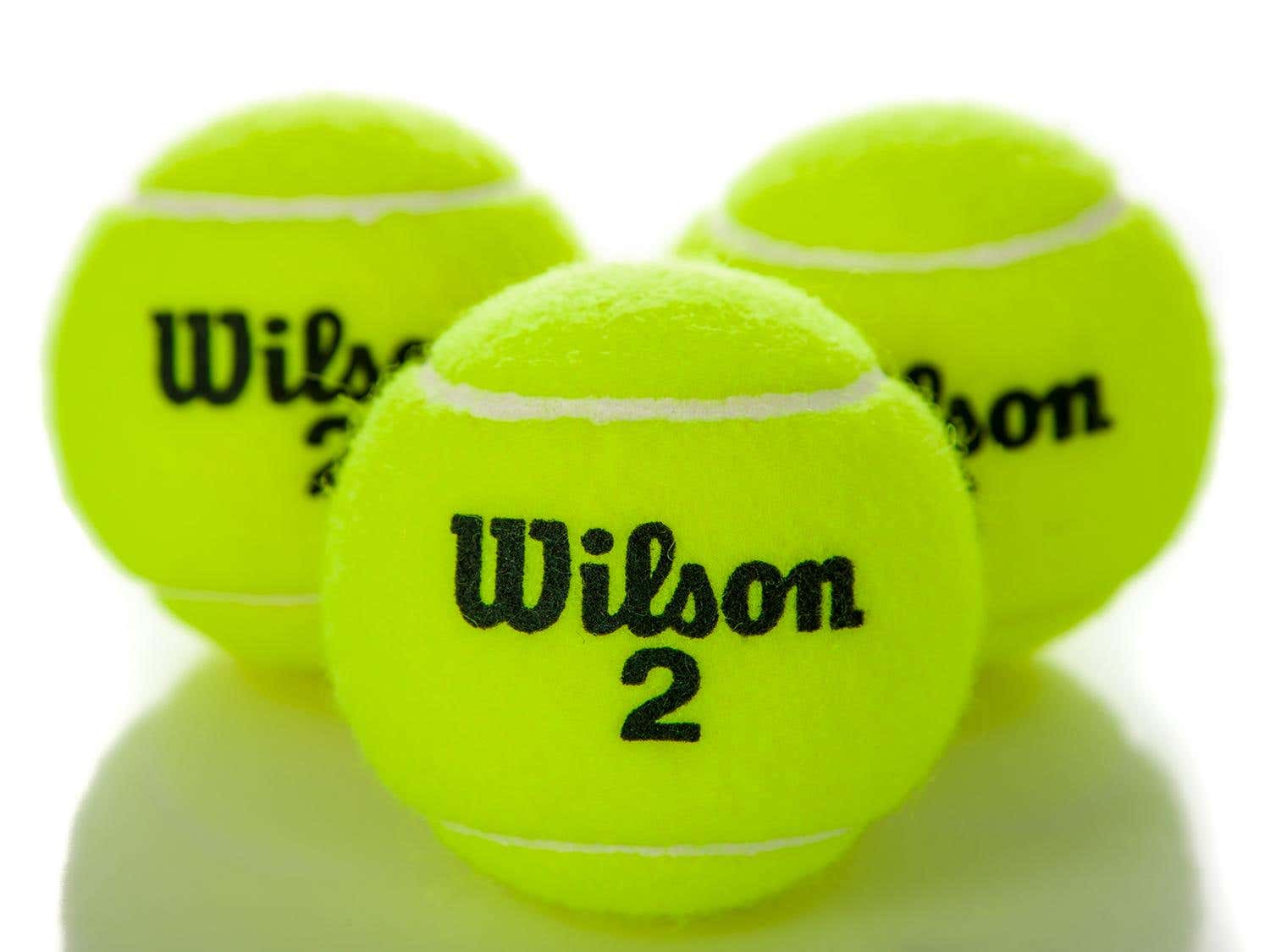 Its the most versatile of balls. The Tennis Ball is such a fascinating multipurpose ball that the actual sport its used in, Tennis, is probably last on the list for games you played with a tennis ball from your childhood. Butts Up/Suicide/Red Ass/Wall Ball/Whatever you called it could also be played with a tennis ball. Running Bases is for sure a tennis ball game. Running and jumping into the pool and making diving catches…and then the tennis ball becomes waterlogged and you peg your friends with it while water whips off the fuzz in that arching wave, lookin like Sonic the Hedgehog. A waterlogged tennis ball could kill a man. Duct taping the whiffle ball bat and playing baseball with the tennis ball. Spraying the top with an aerosol can of some sort, lighting it on fire, and throwing it at city buses that used to drive be. (Wait what? That was just me and my delinquent friends? Another story for another day, carry on.) Hell, even just the debate about whether a tennis ball is green or yellow (its yellow). And I suppose if you, you know, actually played tennis. The tennis ball has arguably provided more entertainment than any other ball, ever.

PS - THE SMELL. Most important part. Pop that canister and soak it in. Top 5 smell in the world.

4. The Wiffle Ball - One of the most IMPORTANT balls ever created. 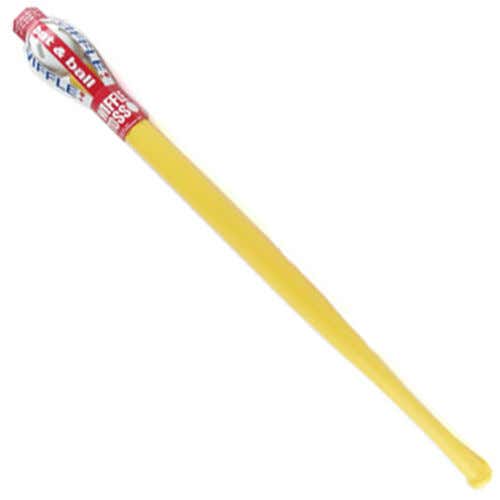 While most of the balls on this list are highly versatile and multifunctional. Not the wiffle ball. The wiffle ball had one purpose. I supposed 2 if you counted "sinking in the pool." But no, the Wiffle ball wasnt good to have a catch. Or to peg. Or dribble. You'd never use the wiffle ball for anything other than its god given purpose. But my oh my, how important that one use is. Wiffle Ball. The most unique of balls. The only ball that can rise and defy gravity. The ball that DANCES. Dances like a ballerina on stage at the Royal Opera House. Dances like Brandon Walker's motha on stage collecting dollar bills. A yellow bat, a wiffle ball, and a chair of some sort, and you have yourself the greatest sport ever.

5. Mini Basketball - Obviously this list is more about the games we played as a kid as opposed to official sports. Because the baseball, football and basketball are obviously the most important balls for actual sports. But the mini basketball, preferably accompanied by an 8 foot hoop, was true fun: 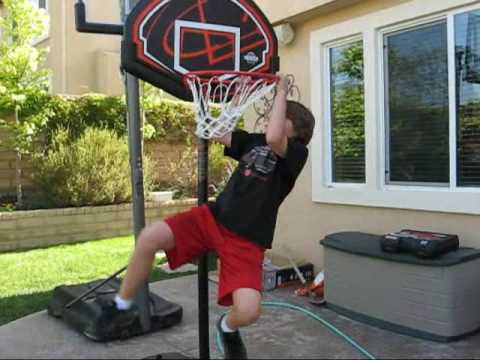 Because all the sudden it was like you were Shaquille O'Neal. You could palm the ball and throw it down, big fella! "SEND IT IN, JEROME!" It made your wildest dreams come true. Which leads me to…

6. The Vortex - John Elway throwing this bitch over 90 yards

Which I'm calling bullshit on. You know why? Because I could through that motherfucker 90 yards. Elway had to throw that a buck thirty, minimum. The Whistling Vortex was like Game Genie for real life existed. Like the Mini Basketball turned you into Shaq, the Vortex turned you into fucking Jeff George. The only downside was you couldnt really play football, per se, with the Vortex. It was really just all about having a catch and airing it out. If you wanted to play an actual game of tackle or 2 hand touch in the backyard, the superior ball was… 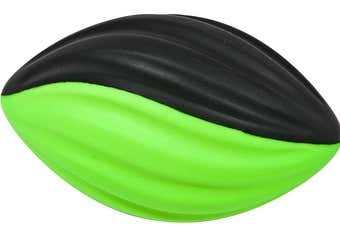 Those spiral grooves made this sumbitch cut through the wind. All other Nerf footballs were like wounded ducks when you went to air them out. Any foam football you couldn't throw more than like 10 feet. But the Turbo…it had the weight, it was the perfect size, had the aerodynamic design, and you could air it out. I swear the neon green went further and faster too. 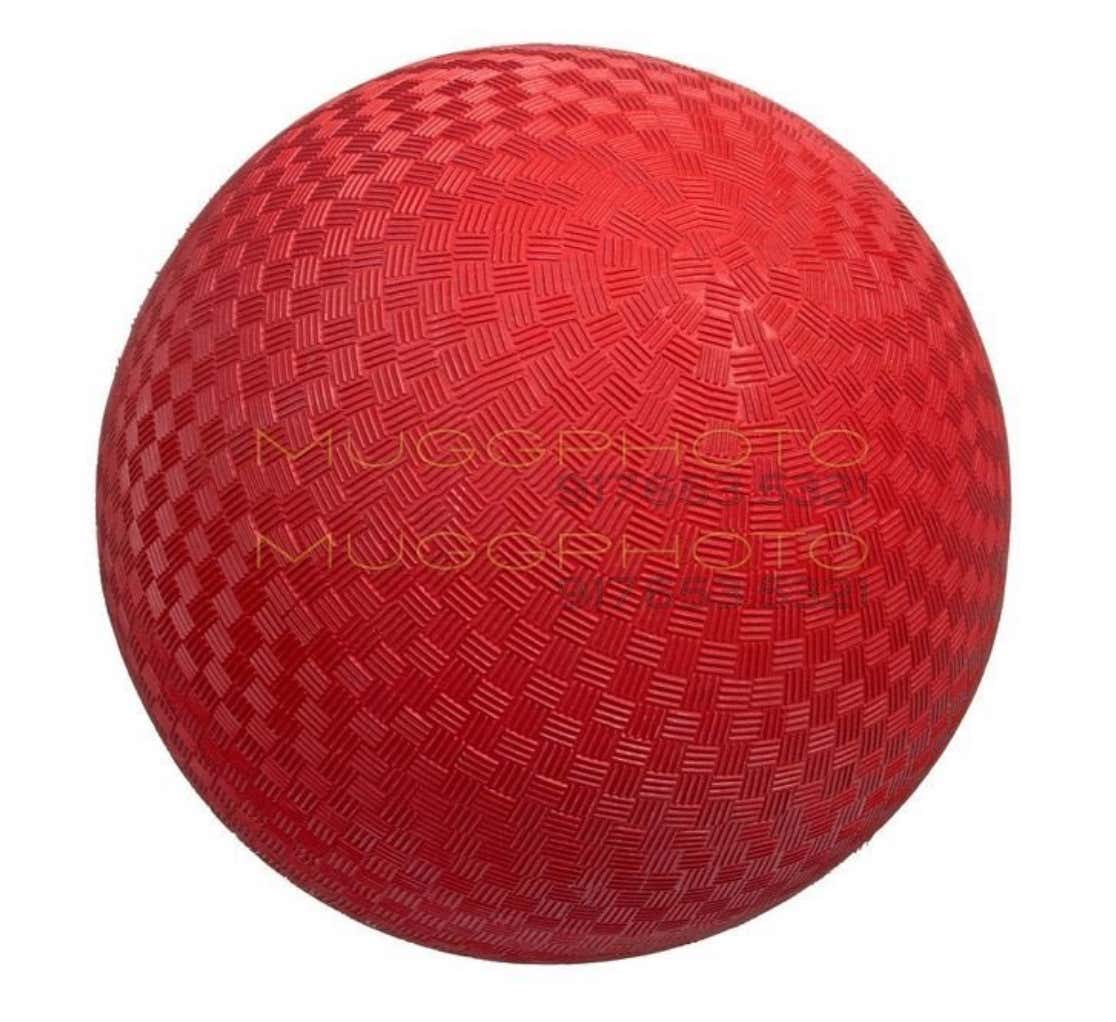 Its probably no longer allowed for Dodgeball, because you could do some DAMAGE with these. Also universally used for kickball, and in the suburbs of Philly, Wall Ball. Did you ever play that game? You served the ball, on a bounce, against the wall, and had to hit it to return volley. There was 5 Star Generals, Waterfalls, and all sorts of other types of serves and nicknames. I believe it was called a "bungee" if you hit it directly into the wall without it bouncing first. I dont think I've ever heard of anybody else playing it. Or at least in any other region. If you played, please let me know I'm not crazy and that this game existed and I didnt make it up. This ball was also used for Four Square, and any raw form of volleyball, basketball, or any other activity with a medium sized round ball.

Honestly, this ball is strictly for Tee Ball and never used again, but those Tee Ball memories are awesome. There was a kid I played with, Mike Nussbaum. He was home schooled, I think was a year older than all the kids in the neighborhood, he was about 6 inches and 50 pounds heavier than all of us, and hit tee ball BOMBS. He was like a white, suburban Danny Almonte. Incrediballs were soft as fuck, pretty much impossible to hit as far as he did. The Great Bambino of Incrediballs. 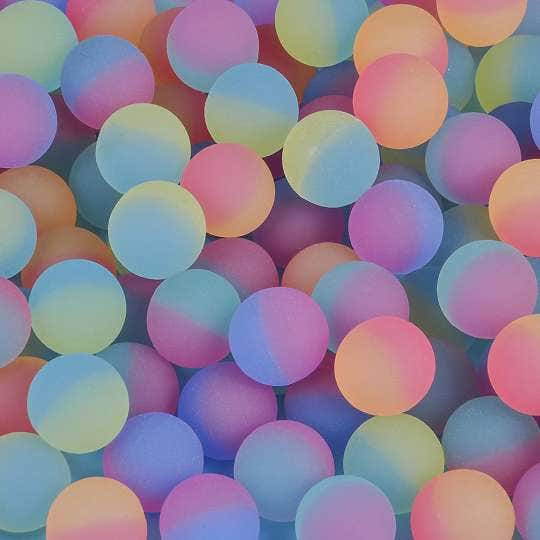 Some call it a Super Ball. They come in different colors and sizes. Some bounce to the fucking MOON. These "icy" ones could go to another galaxy. Or if you threw it off the walls and ceiling in an enclosed room they'd bounce for-fucking-ever. Obviously cant "play" with them as much as you can just fucking blast them to the sky. I suppose if you lived through the Great Depression and you were poor and played Jacks you could "play a game" with them. But the rest of us were just bouncing these down the hallways at school or taking bits out of them. You take a bite out of those icy ones and it kinda fragmented apart. Very interesting. Didnt taste great, not like eating Play Doh. But interesting to eat and bounce.

109,876) And last and DEFINITELY least the WORST ball in existence: the piece of shit, reject, bootleg foam balls from gym glass. Your gym teacher would pour them out of a big net during gym glass…all the kids would scoop up the best balls. The VOITS, the new Nerfs. And at the end, only the shitty decade old foam balls remain. It always had a couple bites taken out of it by "that" kid. Legit perfect teeth marks that probably matched his palette. It traveled no more than like, 2 feet. It was so light if you shot a basket with it, the ball would get stuck in the net. Theres no "brand" or "type' of this ball. Just the Royal We of shitty balls. Footballs, dodgeballs, kickballs, whatever game. The trash ass fuzzy lopsided foam riddled with holes. The Poor Kids of Balls. The WOAT.