Source - Brazilian surfer Felipe “Gordo” Cesarano suffered a massive wipeout earlier this week when he was flattened by a giant wave at Nazare in Portugal.

Footage, captured during the “Gigantes de Nazare” event on January 14th, shows the 32-year-old flying down the face of a 60-foot wave for a few seconds and trying to turn towards the safety of the channel.

However, Cesarano is caught by the churning mountain of white water behind him and dragged under.

Fortunately, he is able to resurface before being pummeled by the next huge wave and his teammate and fellow big wave charger, Pedro Scooby Viana, picks him on the back of a jetski and whisks him away to safety. Both were unharmed in the incident.

Sixty feet. SIXTY FEET. Think about how tall that is. You can barely even see the guy surfing the wave is so big. I went on Felipe’s Instagram and apparently big wave surfing is his thing. The pictures he posts are insane.

I’ve never understood how guys like Felipe manage to stay alive. They essentially spend their days waiting for a chance to drown. And if the chance isn’t high enough they’ll pull back and wait until it is. How can that possibly be fun? Don’t get me wrong, saying you’re a surfer must be awesome, but the actual surfing part? No thanks. I’ve been rag dolled on a boogie board before and it’s a nightmare.

I would be one of the jetski guys, though, that job looks awesome. Stressful because you have to save someones life but awesome. I think I’d be good at it too. 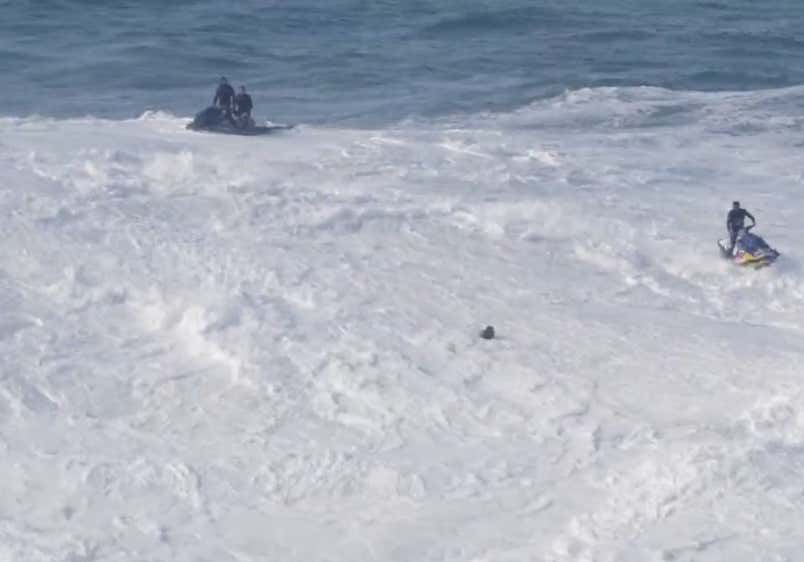 Oh well. It’s a miracle this guy is alive considering how big that wave was. Hopefully he has the same luck going forward.