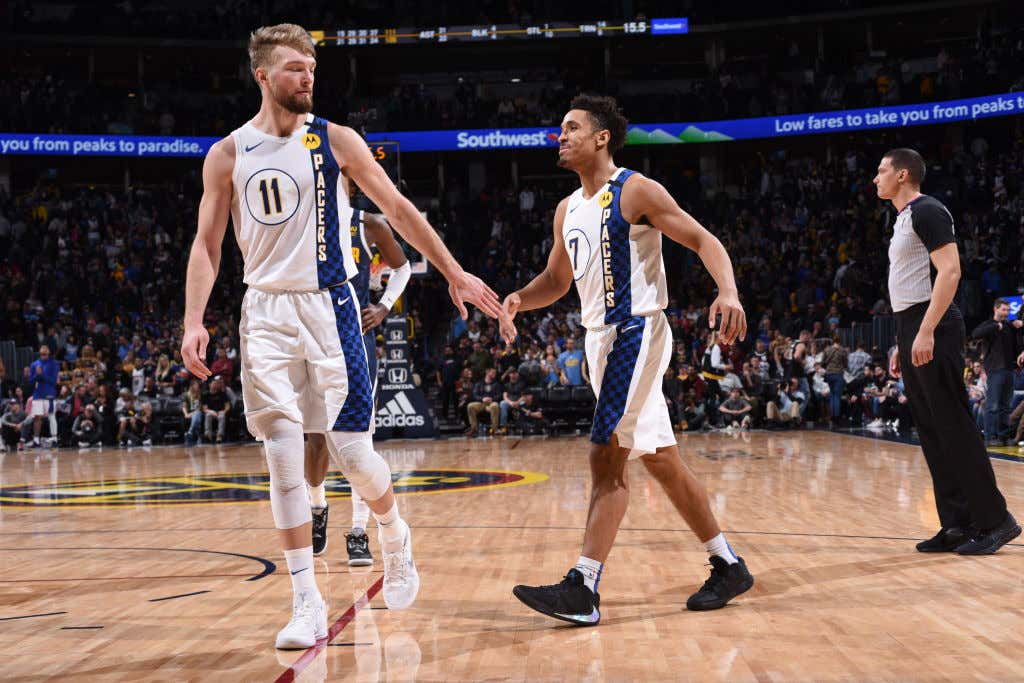 Good morning everybody happy Monday and welcome back to another edition of Last Night In The NBA where we bring you up to speed on everything that went down from the night before in the Association. Now if you're stuck in the cubes today the bad news is there were only 2 games yesterday so this blog will only take you so far this morning in terms of killing time. The good news is there are 14 games today starting this afternoon for MLK Day so you should be set. Of course yesterday was all about football so the chances are strong that you had no idea there was even basketball being played yesterday. That's fine, that's why I'm here because if you missed any of the action here's what happened.

OK so what the hell is going on here. Are the Spurs good again? Their rebuild of being shitty lasted like 30 games? Is that what I'm seeing here because I have to tell you, you look at their schedule recently and you see a 22 point win over MIL, a 500 point win vs BOS, a win over TOR, and now one over the HEat which was revenge for their matchup two games earlier where the Spurs lost by 6. They say the Spurs are like cockroaches in that they just won't die and I'm starting to believe it. They sit just 1.5 back from MEM for the 8 spot and the Grizzlies have won 7 in a row. No longer are the Spurs this pushover team that looks like non of their parts fit together.

it is still funny how in games where both he and LMA play well and each have 20, they find a way to both be negatives in plus/minus and finished -13

So what the hell happened? Well they stayed close early, got some separation in the second quarter, and the bench showed up and carried a lot of the scoring load

I know most of us were ready to write off the Spurs given their start, but something tells me they are going to be fighting for those last two playoff spots for the rest of the season.

For MIA, the good news is you still own a 1 game lead as the 2 seed. The less good news is you're 5-5 over your last 10 and are 11-12 on the road. Another one of these teams that has a huge disparity between home/road. They are 18-1 at home if you didn't know that so much like the Sixers who are also drastically better at home, finishing top 4 is important for their playoff chances. Tough to win on the road when you shoot 43/29% and Jimmy Buckets don't get a whole lot of buckets, but at least guys like Bam and Nunn showed up and were offensively efficient. Hard to complain about 21/16/6 from Bam on 8-13 shooting, and yet MIA fans still won't vote for him to be an All Star. Very weird

With team like SAC/WSH up next the Heat should be able to get back on track before their tough stretch of LAC/ORL/BOS/ORL/PHI/LAC which comes before a little 6 game road trip. Things are certainly about to get tough for MIA and we'll learn a lot about what type of team they are by mid February.

Listen you may not want to accept it, but the Pacers are flat out good even without Victor Oladipo. Considering he's about to be back any day now, this team should be taken very seriously. This team has shooting, they have balance, they have a legit front court all paired with a legit coach. The fact that they are in this position while missing their best player all season is a testament to their system, but also the summer they had. Malcolm Brogdon and TJ Warren haven't just been home run additions, they have saved the Pacers season. Last night was no different, they were two of the four pacers that had at least 22 points

It was almost as if they couldn't miss, finishing with 50/44% splits and 14 3PM with 9 of them coming from the second unit. Here's the thing, you didn't even notice Myles Turner had a rough game before fouling out and basically giving this team nothing. That's what a monster Sabonis was with his 22/15/10, especially down the stretch where he was giving Jokic all sorts of problems in the post. That extension seems to be working out just fine. To go into the Pepsi Center which is not an easy place to win and come out with this type of performance tells us a lot about this Pacers group and one that will only get better once their franchise player returns.

For DEN, so often do we see this team struggle when their outside shot isn't falling, basically just like every other team in the league, and the 2-23 performance certainly didn't help. This loss dropped them to the 3 spot but everything is still so close between the 2-6 seeds that my guess is things will look much different by the time today ends. That's just how it's going to be in the West if you drop a game and reside in the top of the standings and aren't the Lakers.

but the issue clearly came on the defensive end. Can't allow 71 second half points including 41 in the fourth which the Nuggets lost 41-26 and was basically the game. That's tough to swallow. You would think a 7 point lead heading into the fourth at home would have been enough but listen they were once again without Jamal Murray and Garry Harris who happen to be two pretty important players so cut them some slack. This team is still really good.

And that's it! You are now all caught up with everything that went down last night in the NBA. Remember, there are 14 more games today and the first tips off at 2pm so just try and hold on a little longer, there are reinforcements on the way. Have a great Monday!