This is, without a shadow of a doubt, one of the most satisfying videos in internet history. I say that without an ounce of exaggeration. Take all those "Oddly Satisfying" videos of people writing calligraphy or drawing within the lines and throw them out. Forget about the DVD player logo screensaver hitting directly into the corner of the TV screen as it bounces around. They all pale in comparison to this officer calmly, intelligently, and definitively eradicating this gun toting, pants pooping idiot and her sidekick boyfriend. When he said to him "Are you a detective? Did I see you at cop school?" I stood up out of my seat and fist pumped. I reacted like black guys react to magic tricks or dunk contests. I wanted to run around the room. If I had friends in the room I woulda done the thing where you pretend to hold them back with both arms extended. I wanted to do that multiple times. This cop delivered like 10 KILLSHOTS in 2:20.

I've often wondered what would happen if I came face to face with this moron. I'd like to imagine that I would handle it EXACTLY as this officer did. Pointing out the facts, remaining impartial, staying calm, not giving her any ammo, and doing it in a respectful and mature, yet deadly accurate and humiliating manner. But I know I'd get caught up in emotion. I know that I'd end up just yelling "You pooooped your paaants!" And since she's someone who has staked her entire worth and entire life on the 2nd amendment I'm sure she knows a fact or 2 more than I do regarding guns and the Constitution and I'd end up just resorting to name calling like "Yea but you shit yourself."

And as fun as that is to do here on the internet - relentlessly mock someone who takes themselves way way way too seriously - I much prefer this approach. This officer knocked it out of the FUCKING PARK. Because the thing about Gun Girl is not her political beliefs. I disagree with her, but I disagree with a lot of people politically and dont view them as opportunistic pieces of shit like I do Kaitlin Bennett. Whats irrefutable about this chick, gun politics aside, is that shes a real life troll who takes her idiot boyfriend, a cameraman, and a microphone, shows up places shes absolutely not wanted or bothers people who absolutely dont want to talk to her and then plays the victim when those people are like "Get the fuck out of here!" She chooses inappropriate times and locations to push her agenda and try to collect her views and then pretends she doesnt understand whats wrong with her behavior. She plays dumb. She hides behind an extremely literal-but-intentionally-obtuse interpretation of the Constitution, and she hopes and prays for someone to get too emotional, say something rude or overly passionate or incorrect, and then she can exploit it for views. Which is why its so fucking awesome when people stay calm, politely and succinctly point out that they know the game shes playing, and give her a lesson on why shes an insufferable, selfish, childish asshole who craves attention, and nothing more.

That cop didnt mention guns once. Trump was never brought up. Race was not involved. This verbal ass whooping had nothing to do with race religion creed or politics. This was a grown ass adult, one with a functioning brain and a mature understanding of the world, talking to a child. Giving her a life lesson about how you can still be a fucking ASSHOLE without breaking rules or laws. Sure, you have a right to be there. Yea, you have a right to free speech. And no, its not illegal to do what you're doing. But are you an asshole for showing up to a peaceful event where you are not wanted, aggravating and irritating people, and then playing the victim? Undoubtedly. Are you being childish and ridiculous when you pretend to not understand the reaction you illicit when you're rudely inserting yourself into an event and intentionally trying to ruin their time? Hundo percent!

And thats where I thought this cop was particularly great at articulately explaining himself while staying calm. When hes like "Listen we both know whats going on here, we both know you're playing games." She'll coyly deny shes doing any of it. She'll say "I dont know what youre talking about!" And she plays the game correctly where shes never technically breaking rules or laws, but theres more to life than just what can get you arrested. More important than the written code or laws is the generally accepted rules of society...the unwritten code of how not to be an asshole. And unfortunately people like her can pretend to not understand and be intentionally ignorant, and unfortunately theres no way to out-argue someone if they go that route. Thats why they say dont argue with fools. But this officer did just about as perfect of a job as you can with this conniving blockhead.

While we are here, by the way, I'd like to honor Poop Girl's fiance, Mr. Poop Girl. There is only one person on earth worse than her and its him. Congratulations! You did it. Despite the existence of Kaitlin Bennett, you somehow found a way to be the biggest, widest, most gaping asshole on the planet. You two are perfect for each other! Go get married and plan a honeymoon on the surface of the sun. That guy is the biggest fucking tool on the planet earth. There's pathetic, and then there's ride-my-girlfriends-coat-tails-even-though-her-coattails-are-nothing-more-than-a-shred-of-internet-notoriety pathetic. And you wanna know why hes the worst? Again not because of politics. No, not because he just latches on to his girl's persona and tries to mimic her and soak up her notoriety rather than make his own name and own way. Not because he tries to play the victim in this video like a little bitch. Simply because one day you might catch him in Mets gear and the next you'll catch him in Pinstripes: 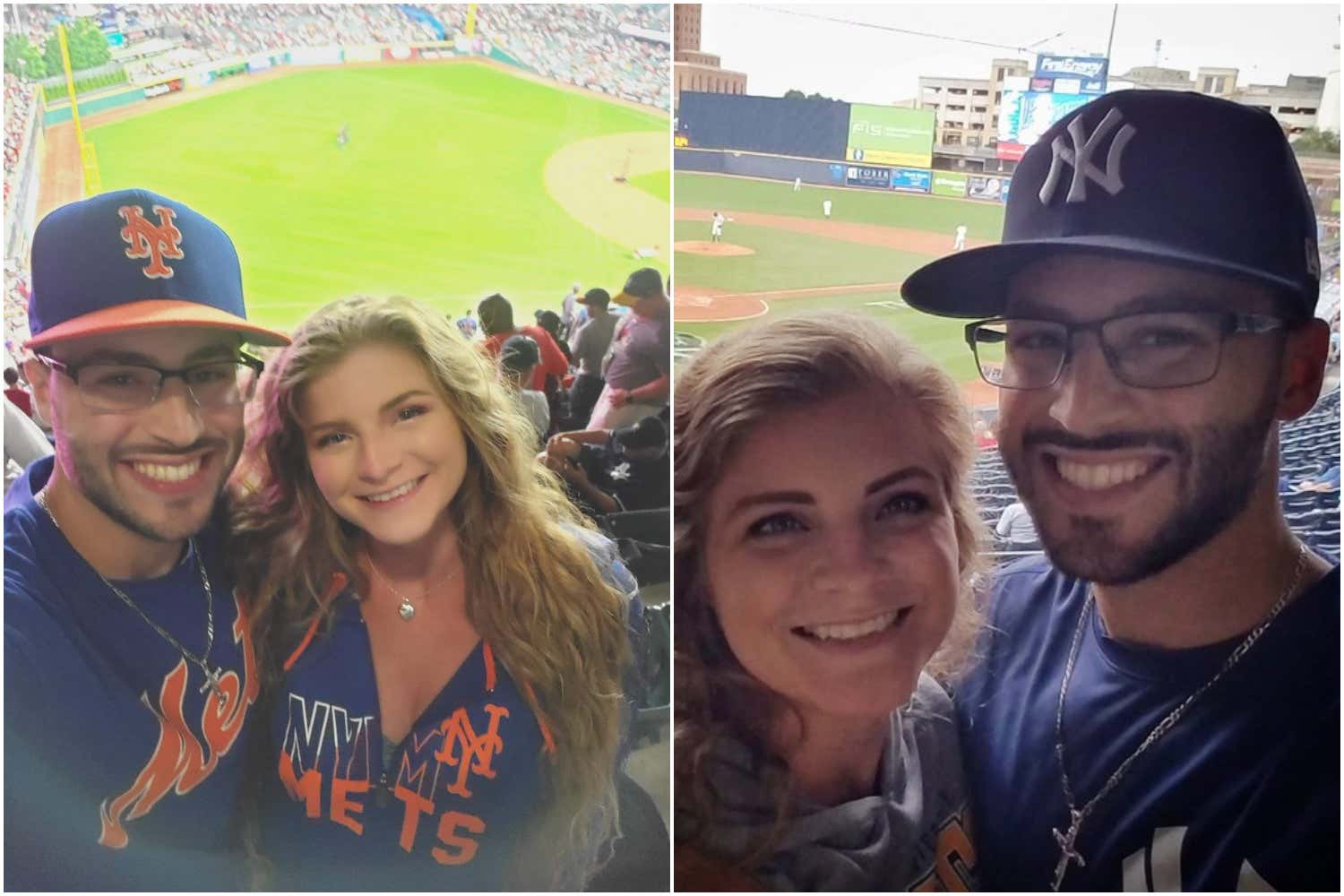 I mean this with the utmost sincerity - if you're a Mets and Yankees fan you're a trash human. I've never met one that I've even found slightly tolerable. You are most likely a bad person, with zero integrity, who will latch on to anything you can to try to find success. Which is why its so extremely fitting that hes basically his girlfriend's secretary and just latching on to her to try to be relevant.

Why dont you two assholes go back to Ohio, get married, churn out a few innocent kids you'll turn into gun toting, race bating assholes, and the whole family can share diapers together while you shit yourselves. Nobody takes you seriously, everyone is woke to your shtick, and you'll never be more than Poop Girl. Just quit now.

PS - Once again I ask, how the fuck are these videos getting out??? Are these leaks?? Is this cutting room floor footage somehow making its way on to the internet?? Did Info Wars post it without her consent?? Or is she intentionally posting this footage thinking its good for her brand?? I truly hope shes putting this out on purpose, because that would be PROOF POSITIVE shes in this for nothing more than the attention. Posting these videos where you get dunked on over and over just for the views is internet suicide.

PPS - If theres more of this cop convo, I need to see it. Please send it my way.