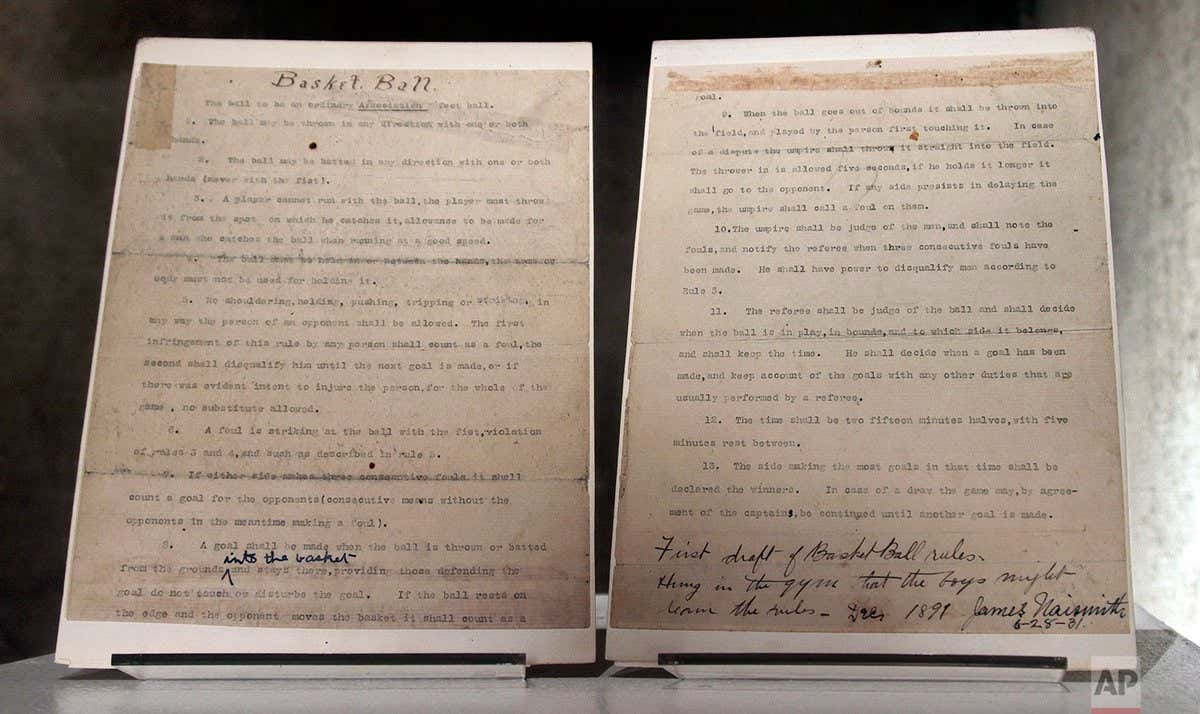 They say you learn something new every day and today I learned that the official rules for the game we all love turned 127 years old today. That's pretty cool. It's also a pretty nice reminder that not only did my beloved Massachusetts invent America, but they also invented perhaps the greatest sport in the history of sports. I know we all knew that already because anyone who is a fan of basketball knows where it all started, but this was the first time I've ever seen the actual picture of the initial official rules and reading them it became clear to me that we need some of these bad boys back in the league immediately or at least parts of them. For example...

Hell yes. Do you hate replay? Do you think it messes everything up and slows the game down? Well do I have a solution for you. Time to go back to 1892 and just have the ref throw it onto the court and have there be a free for all. At least that's how I interpret that rule, there's only that one line about it. I feel like there could be some shady shit in terms of what direction the ref would throw it, but what if all 10 guys had to stand on the baseline and the ref just tossed it to the halfcourt circle and the first to get it gets possession? Sort of like XFL kick offs or some shit. Imagine the drama that would be. If you're caught in a shift where none of yoru fast dudes are on the court you could get screwed. I say try this in the G League.

In case of a draw the game may, by agreement of the captains, be continued until another goal is made

While I enjoy a multiple OT thriller as much as the next guy, you can't tell me sudden death OT wouldn't be fucking awesome. Would you cross half court and immediately pull up from 30 feet and try and end it quick? Just think of the tension as soon as a team wins the tip to start off OT. Usually the first team to score 4 points wins in OT, but it would be fucking sweet to see guys like Steph or Dame get the tip and launch from like 35 feet to end it before the opposing team even knew what hit em. Maybe you don't do this for the initial OT, but if we get crazy and get up to like 4 like we saw last playoffs? Give me next basket wins drama.

The first infringement of this rule by any person shall count as a foul, the second shall disqualify him until the next goal is made or if there was evident intent to injure the person, for the whole game. No substitute allowed.

As we know, in today's game you get a flagrant 2 you're ejected. That's not new. The only issue is in today's game you can bring in another player off the bench. I like where Naismith's head was at with this one. If you have someone on your roster that is going to be a scumbag and intentionally hurt someone, you should not just lose that player but have to play 4 on 5. Let's see the power play make its way to the NBA. At the very least it would be exciting and it works in hockey and lacrosse so I don't see the issue. You switch up your defense and play a zone and try and survive. I'd even be cool with once the dude gets tossed you have like a 60 second "penalty" and have to play 4 on 5 until that's over, and then someone can come in at the next dead ball.

I know this may seem like the most ridiculous one, but again, try it in the G-League and see what happens.

If the league is going to experiment with weird shit like what they are doing with the FT rule where if you get fouled shooting a three and make the first you get three points, I see no reason why we can't also try and go back to our roots and implement some of these original rules. I'm sure there are people out there that don't want change and want to keep things the way they are, but the NBA is a progressive league and they are always looking to solve their ratings issue. I feel like if they try some of the things in this blog they won't have to worry about the fact that everyone just streams their games off Reddit because League Pass loves to not work despite costing hundreds of dollars. Adam Silver, you're welcome.