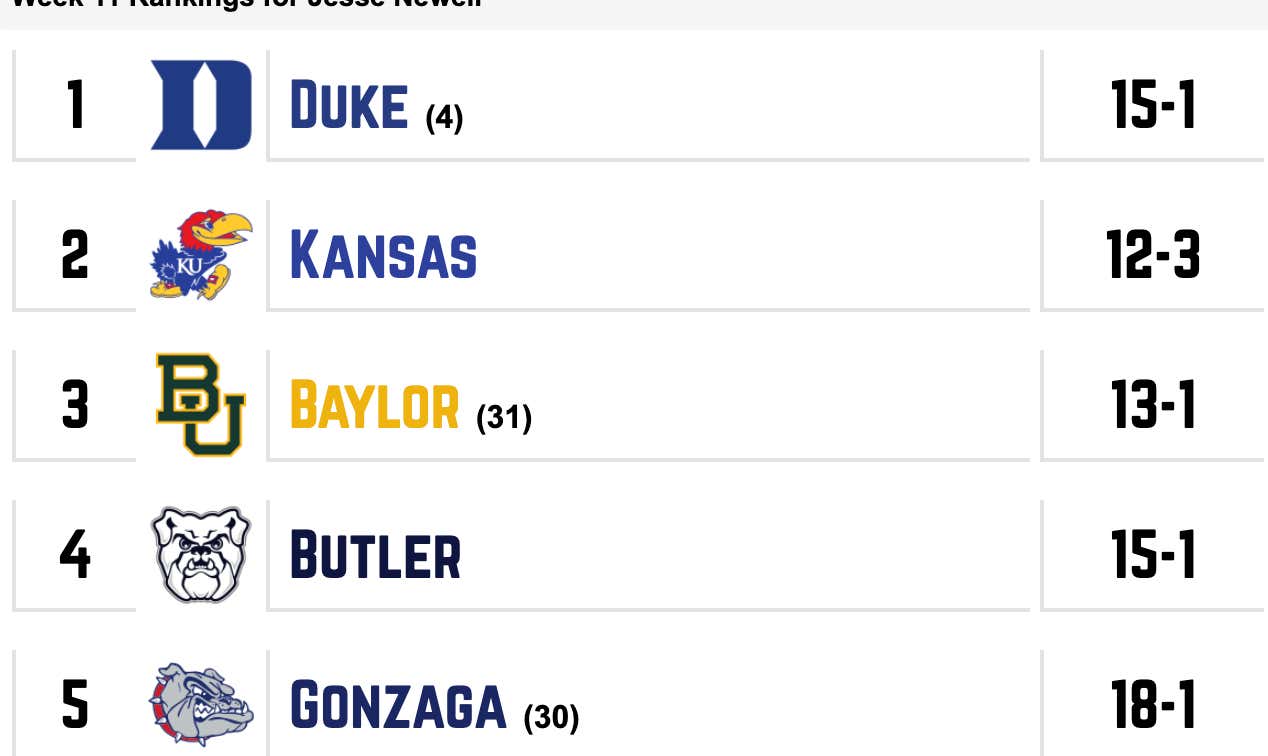 So this has been floating around college basketball Twitter over the last day and it's something I wanted to discuss. This year has been wild in college hoops and rankings seem to be yelled about every week. However, this is probably the most discussed I've seen rankings. Die hard college hoops fans are arguing about whether Baylor, Duke or Gonzaga should be No. 1 right now. Die hard college hoops fans are arguing who should be in the top-5 with Butler, Kansas, Auburn, San Diego State, Dayton, etc. It's honestly as insane of a season as I can remember, which has been incredibly fun to cover.

So in case you missed it since you were watching football on Saturday this happened:

That game was in Phog Allen and yes, Devon Dotson was banged up for Kansas, I honestly don't think it would have mattered. Kansas was and is the better team. Their guards outplayed the Kansas guards. Scott Drew outcoached Bill Self with his ability to switch up top, front Udoka Azubuike and provide weakside help. It was awesome to watch.

I get what Jesse is saying here though. One-game results aren't the best way to determine who is better. I say it all the time with the NCAA Tournament. We rarely get the best team winning, but it's the best way to determine a champion. It's all predicated on matchups, who is hot, etc. The same could be said for a Saturday in January. Sometimes you shoot like shit, sometimes your opponent can't miss, shit happens.

There's no reason to rank Kansas over Baylor. Baylor has the better resume. Kansas has 3 losses to Baylor's 1. Also, Baylor looks like the better team. Kansas is predicated on three things and three things only. 1) Devon Dotson and his ability to be a top-5 PG in the country. 2) Udoka Azubuike finishing at the rim, which is mostly predicated by Devon Doston. 3) Someone on the wing hitting shots and being a playmaker - Garrett/Agbaji.

That's where he's wrong. That's why I hate the AP poll. People are inconsistent (I'll give Jesse credit, he's credit with his theory on this). There are far too many beat writers who only focus on one team determining what number pops up next to a team on your screen. It's a major problem that is really coming to light this year. Remember how Graham Couch (doesn't have a vote anymore) voted last year?

Baylor is the best team in the country. They have the resume, they look the part, they have the wins. That's where the AP is wrong … again.