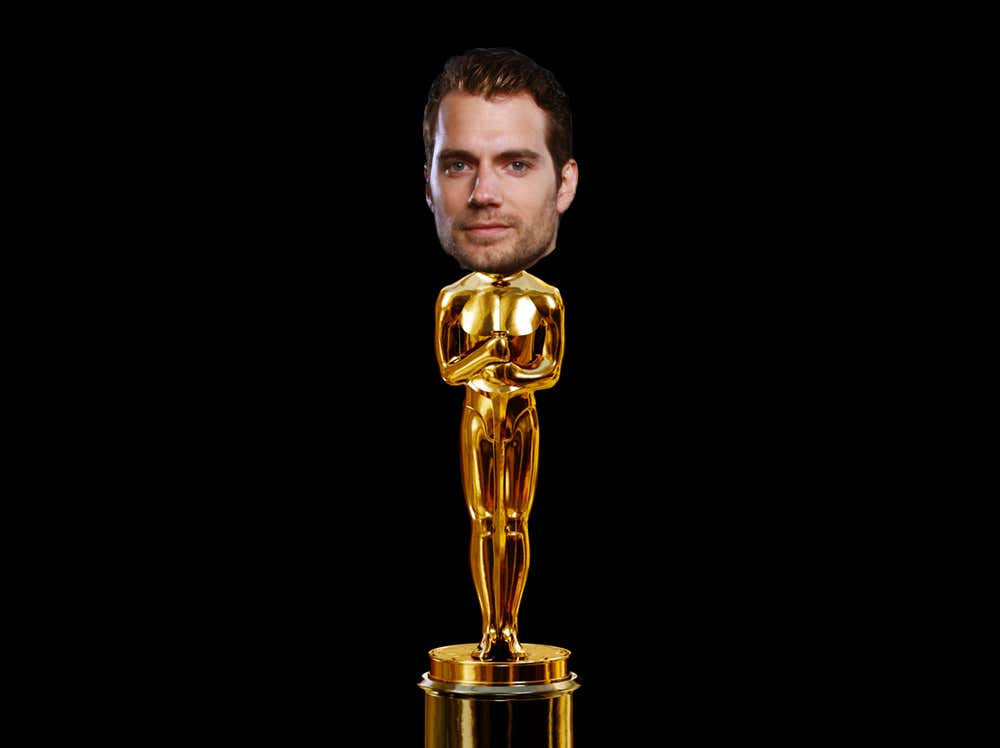 The Oscar noms dropped this morning at 5am PST (dope), and I have some thoughts. Here is who I think should have won, as well as who I think got snubbed by the Academy. Feel free to TLDR and cast your vote at the bottom as well.

Best Actress in a Supporting Role

Who I Think Will Win: It's a near-lock for Laura Dern. She has a TON of momentum already and I just don't see anyone else getting it.

Who I Think Should Win: For my money, Jennifer Lopez had the best supporting role this year. She made 'Hustlers', which I thought was going to be pretty bad based off the trailers, into one of the better movies of the year. She really blew me away with an authentic and grounded performance. Full Review HERE.

Best Actor in a Supporting Role

Who I Think Will Win: It's Brad Pitt. He's almost surefire but there is a chance for one of the Irishmen to upset him.

Who I Think Should Win: I love Pitt, but I still don't think that his performance in OUTIH was a huge leap or achievement. Personally, I think Song and Pesci both had more to do with the success of their movies. That said, Dafoe had the hardest performance out of this entire group. If you put anyone else in that role, 'The Lighthouse' wouldn't have been what it was. Full Review Here.

Who I Think Will Win: It's the same as who I think should win, and it's '1917'. If it doesn't win, I'll fucking riot. What Deakins was able to do with this movie is one of the most insane technical achievements I have ever seen put to film. Full Review Here.

Who I Think Will Win:  I could see this being the compensation  for Endgame. My only discrepancy with the actual nominees is, as you can see, 'The Irishman'. I think the facial deaging worked and definitely didn't take away from the movie, but also looked very weird at times. Meanwhile the space-effects in 'Ad Astra' are really incredible.

Who I Think Should Win: Out of all the movies listed, I really think I was the most impressed by 'The Lion King'. People bitched about how the mouths looked weird or whatever, but I thought it was a really outstanding looking film. The problem is that the actual movie sucked ass. But independent of that fact, the VFX are indisputably good.

Who I Think Will Win: Probably 'Toy Story 4'. It has the pedigree, it's a competently made movie, and the animation is admittedly very good. Although, 'Missing Link' was a big surprise win at the Globes.

Best Actress in a Leading Role

Who I Think Will Win: It's looking like Renee Zellweger. She has the momentum and it's within a movie that's about a subject Hollywood loves, themselves.

Who I Think Should Win: I think Lupita had the most complex performance of the year by far. Playing both roles was really impressive, and it sucks that she's going to fall victim to the release date. Full Review Here.

Best Actor in a Leading Role

Who I Think Will Win: As of right now, Joaquin is almost a guarantee, and rightfully so. He really brought himself to a weird place, similar to Lupita in 'Us'. It's one of the strongest performances of his that I have ever seen, and I just wish it was matched by the strength of the movie.

Who I Think Should Win: I think Joaquin earned this win, so I'm sticking with him. That said, I just want to bring some more recognition to what Taron Egerton and George MacKay were able to do in their movies. I've been preaching this on twitter but it bears repeating: Taron Egerton was more impressive in 'Rocketman' than Rami Malek was in 'Bohemian Rhapsody'. Going by transitive property, if Rami won an Oscar for that performance, then Taron should have at least been nominated. in '1917', George MacKay had one of the most intense roles that required so much both physically and mentally from an actor that I really can't believe he isn't getting more award love. Full Review

Who I Think Will Win: So far, Mendes has picked up accolades, and is currently the favorite. Much like with Phoenix, it's well earned.

Who I Think Should Win: As some of you may or may not know, 'Parasite' is the only movie I ever rated a 100/100 since we started rating them for LCB in 2017. It's absolutely perfect, and I'm giving it to Bong here. Full review.  Full review. 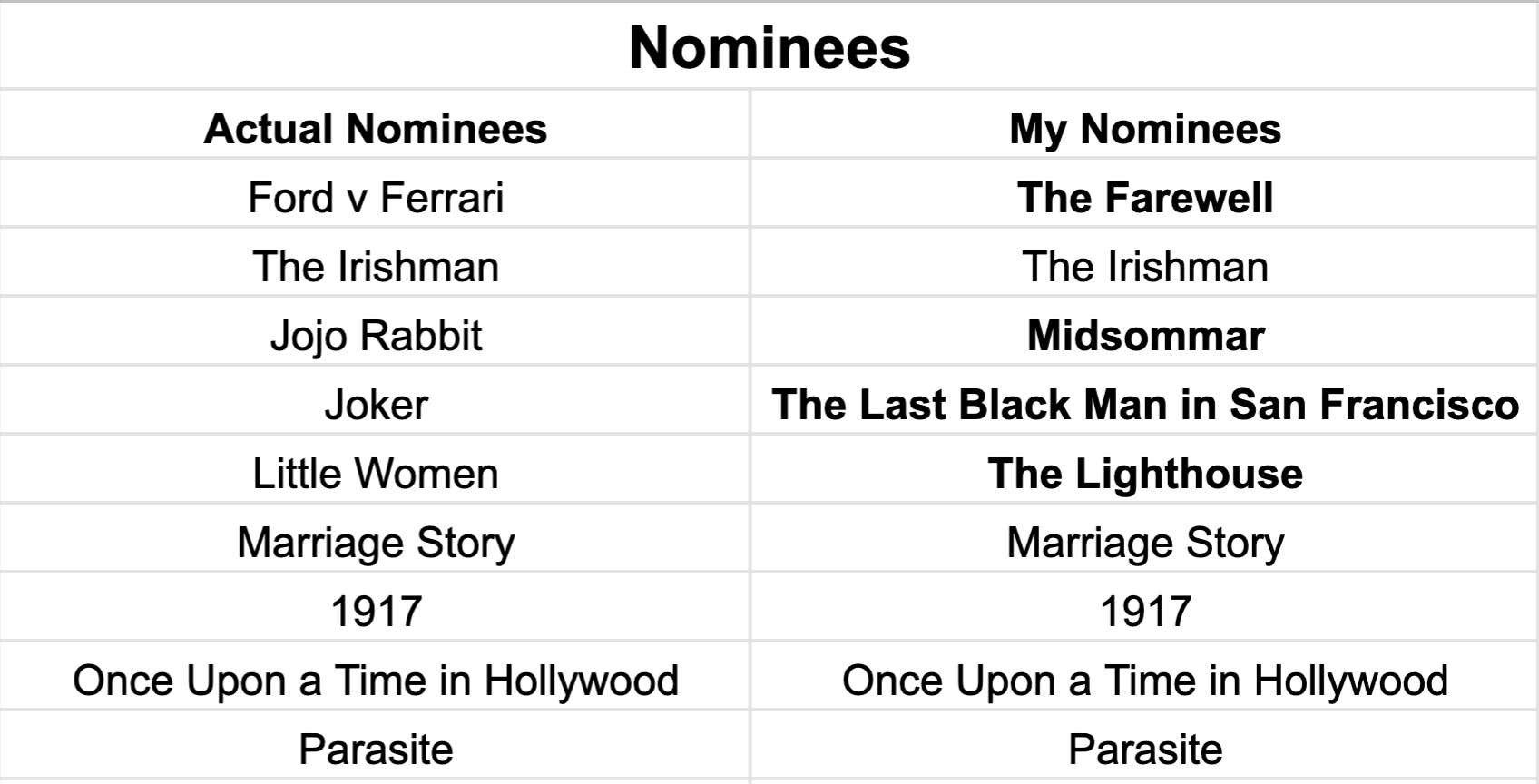 Who I Think Will Win: As of right now, I'm not sure. '1917'  winning best picture - drama isn't exactly an indicator, but I'm not nearly as secure in my prediction of 'Joker' as I was before.

Who I think Should Win: Much like with best director, this belongs to the Bong Hive. 'Parasite' is a perfect movie from start to finish, and it deserves the award.

Who do you think should win? Vote here: