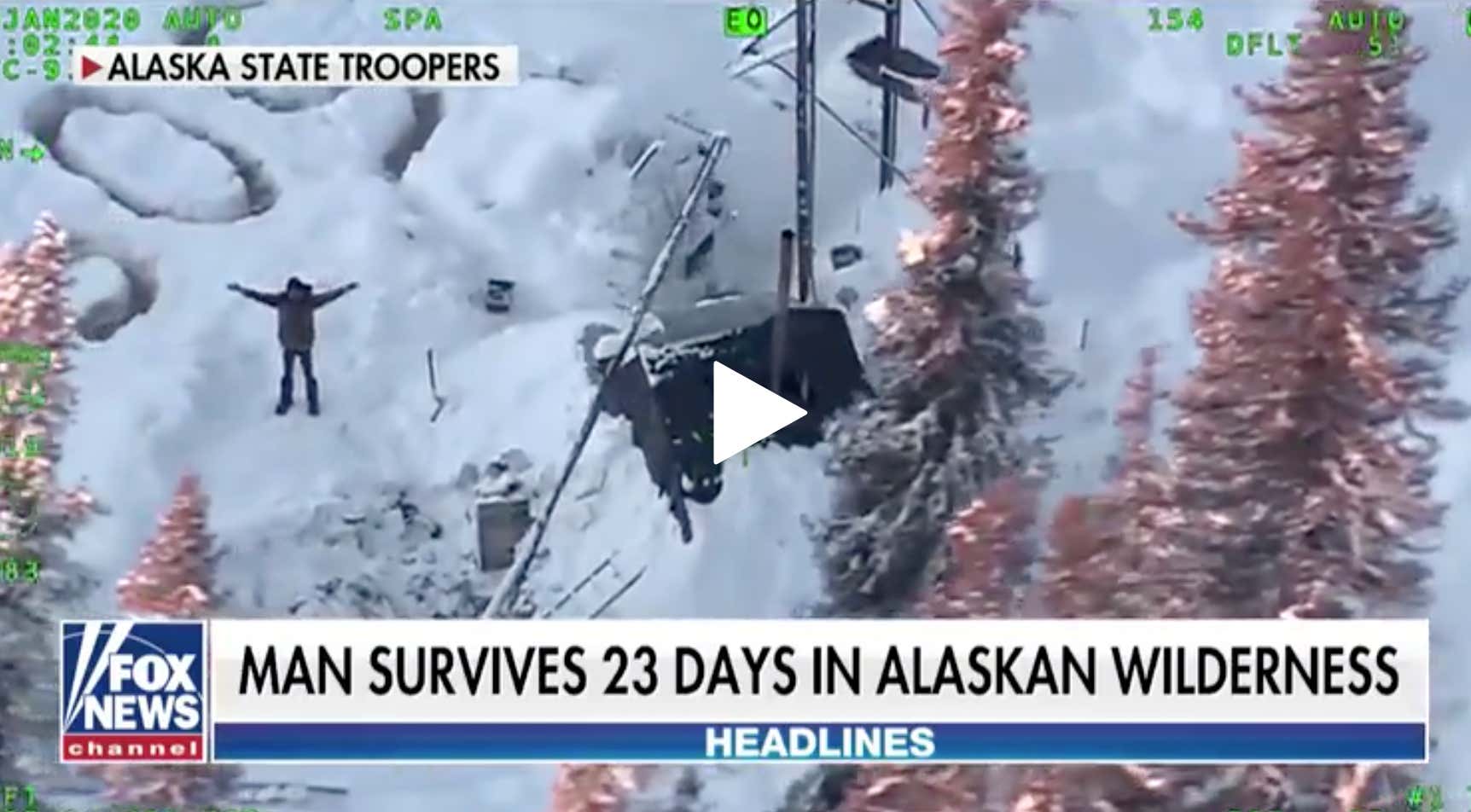 FOX — A man managed to survive more than three weeks in the rugged Alaskan wilderness after his remote cabin burned down until he was rescued last week by state troopers who spotted an "SOS" signal stamped in the snow.

Alaska State Troopers said in a news release that 30-year-old Tyson Steele was found Thursday at a makeshift shelter at his remote homestead about 20 miles outside of Skwentna, located about 70 miles northwest of Anchorage. Officials were conducting a welfare check on Steele after he had not been heard from for "several weeks" when they arrived in a helicopter in the remote area to find the 30-year-old waving for help and "SOS" stamped in the snow.

First of all, I've got to shout-out Ken Marsh, AKA the Walt Whitman of the Alaska State Troopers:

"Steele’s shoulder-length hair, chestnut brown near the roots fading to golden blond near its frayed tips, hung matted and dreadlocks-like over his neck. His auburn beard flowed untrimmed to his chest," Alaska State Trooper Ken Marsh wrote in a recap of the rescue. "The combination made him seem vaguely reminiscent of actor Tom Hanks’ character in the movie 'Cast Away.'" 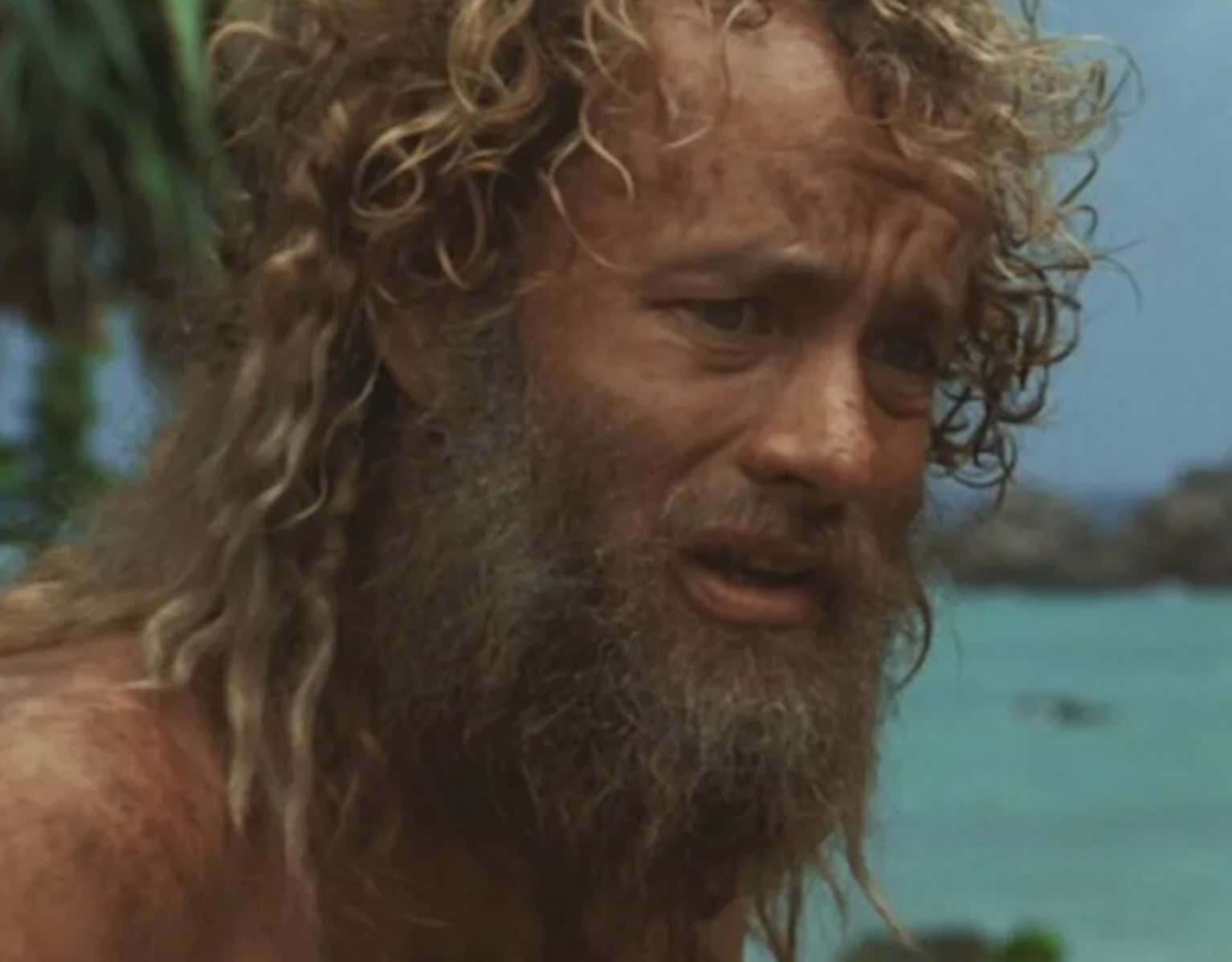 I mean I've never read such a poetic police report in my life. Felt like a cross between a Wordsworth poem and erotica chick-lit. His chestnut brown hair, his auburn beard, flowing untrimmed to his broad chest. His chiseled biceps rippling against the seams of his thermal top, his frayed parka dipping slightly below his throbbing manhood.

"His clothes smelled of smoke and his hands were calloused, rough, and ash-stained," Marsh wrote. "Nonetheless, he appeared healthy overall and energetic as he nursed a tall cup of McDonald’s coffee. He seemed happy to talk, and certainly to have survived 22 or 23 days in the wilderness."

Police poetry aside…obviously the biggest shoutout goes to Tyson Steele, the 30-year-old man who survived over THREE WEEKS in the Alaskan woods, in the dead of winter, 20 miles away from the nearest living human being.

Steele was staying in a cabin that was only reachable by air charter, alone, since September. One night he was burning a piece of cardboard in the stove when a spark hit the roof and turned into a massive grease fire.

"The fire is just a huge, massive grease fire. Every shovel of snow that I throw on it – I’m hysterical trying to put it out and it’s not doing anything," Steele told state troopers. "And I worked up into the morning, into the light trying to put out various sections of the fire."

He was only able to grab a few supplies — he didn't have a map, a phone, snowmobile or even snowshoes. Didn't even have a hatchet like Brian Robeson (shout out 5th-grade summer reading).  He had a pair of boots and one pair of socks "full of holes", the wool sweater and long johns he was wearing at the time of the fire, and one set of "greasy, charcoal-smudged overalls" he found later.

Steele spent a couple of nights in a "snow cave," then managed to build himself a shelter out of the wreckage of his cabin. He was able to build a small fire which didn't keep the place warm but was good enough to heat up the 30-days-ish worth of rations he had.

When the food ran low, he had to eat pineapples despite having a pineapple allergy. (Not sure why he had pineapples with him in the first place. Do they come standard in like wilderness survival packs?)

He had a hunting rifle, but — in what turned out to be a super lucky twist — all the ammo went off in the fire.

Among the items to burn in the cabin fire were all of Steele's bullets which were in an ammo box that exploded and was like "a war zone" during the blaze.

"It was just 500 rounds going off all at once," he recounted to state police.

Speaking to Fox 13 on Saturday, the 30-year-old said he was grateful all his bullets were lost so it was not a "temptation" to end his life when he thought he may not survive in the wilderness.

Also lucky was that Steele had people who cared about him, so when nobody heard from him in weeks, they sent the helicopter out for a welfare check, where they saw the massive "SOS" written in the snow.

And as our hero was rescued, he made the request any hero would:

Rescuers set him up with a shower and fulfilled his request for a McDonald’s Combo Meal #2.

Mountain Man Tyson Steele, living legend of the Alaskan Wilderness. Like Into The Wild but with a successful ending.

There is another detail of the story that I purposely didn't mention because it's too sad and nobody needs that on a Monday morning. You can read the full thing at Fox if you hate yourself and your happiness.