Alright so Kassian may have put the physical beatdown on Tkachuk after getting bundled into the boards by your mom's favorite rat...

...but boy oh boy do I have to award the TKO to Chucky here for this verbal beatdown. Heck, verbal beatdown doesn't even do this justice. It was a verbal massacre. And the saddest part is that I fear Zack Kassian simply isn't intelligent enough to be able to respond here. Like at least if Tkachuk wanted to (which he clearly didn't in that clip), he could turn around and throw a couple punches at Kassian's face himself. But I genuinely don't think that Zack Kassian has what it takes to be able to respond in the slightest to Tkachuk saying he's not talented enough to get out of the way of the hit, he's not smart enough to realize that Chucky is going to bury him along the boards there even though it happened multiple times earlier, and then is donkey-brained to respond like that because the Flames then responded by taking the 2 points with the win.

I mean if this was Kassian's only response...

Then Tkachuk just verbally beat the shit out of him way harder than he could ever physically beat the shit out of Tkachuk. The meathead response is always either calling the other guy a pussy or just resorting to a "fight me" comment. Matthew Tkachuk verbally picked him apart piece by piece. He's already been doing this shit for years with Drew Doughty. Stirring the pot with Zack Kassian is like throwing the training wheels back on after dealing with Doughty.

With all that being said...it's still a tough scene for this photo to come out of the entire ordeal. Almost impossible to give Tkachuk the W after seeing this. 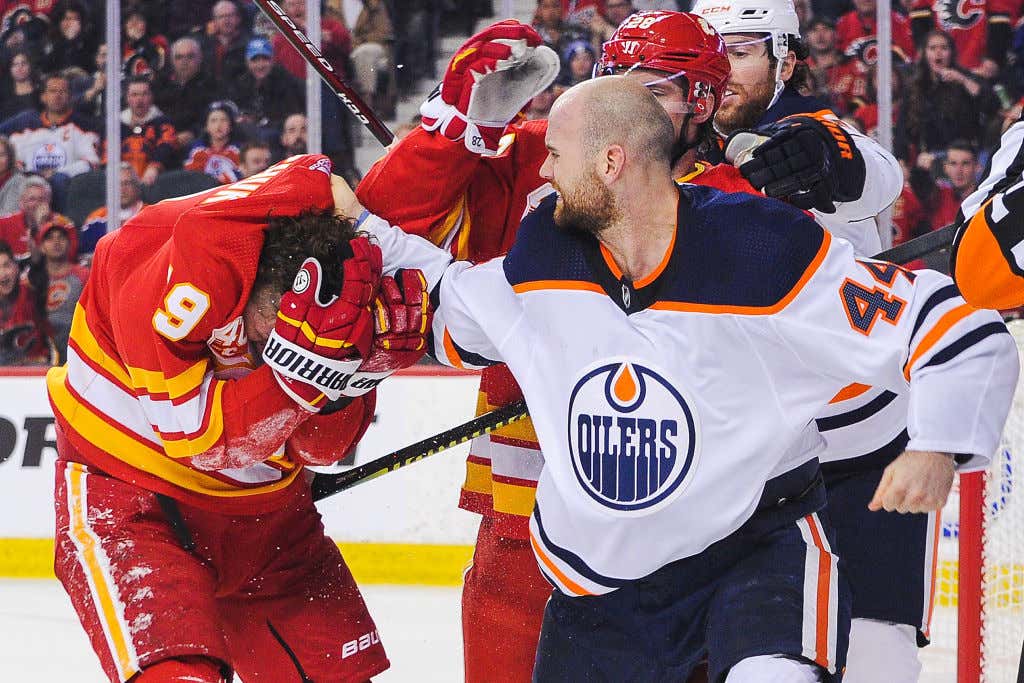 But the beauty of The Battle Of Alberta means that we'll get to see plenty more rounds of this in the future. Thank the Hockey Gods for the Tkachuk family. Those guys just love conflict. They crave it.