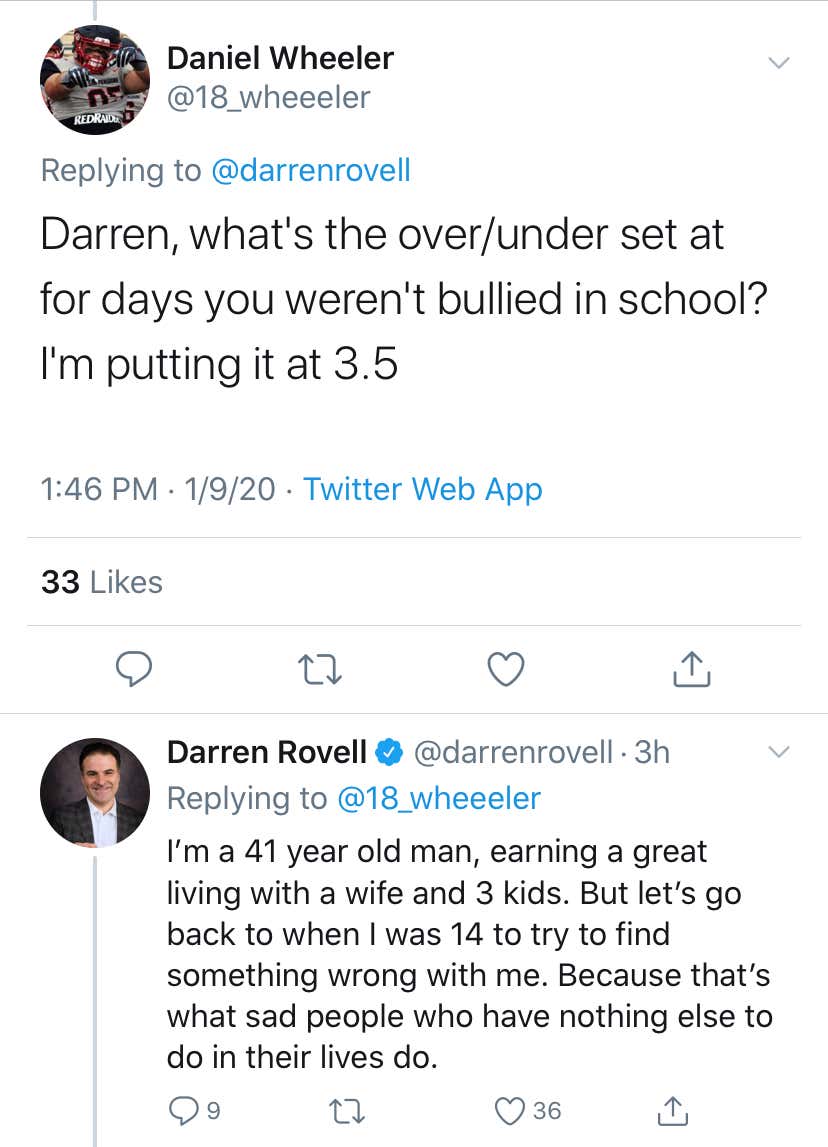 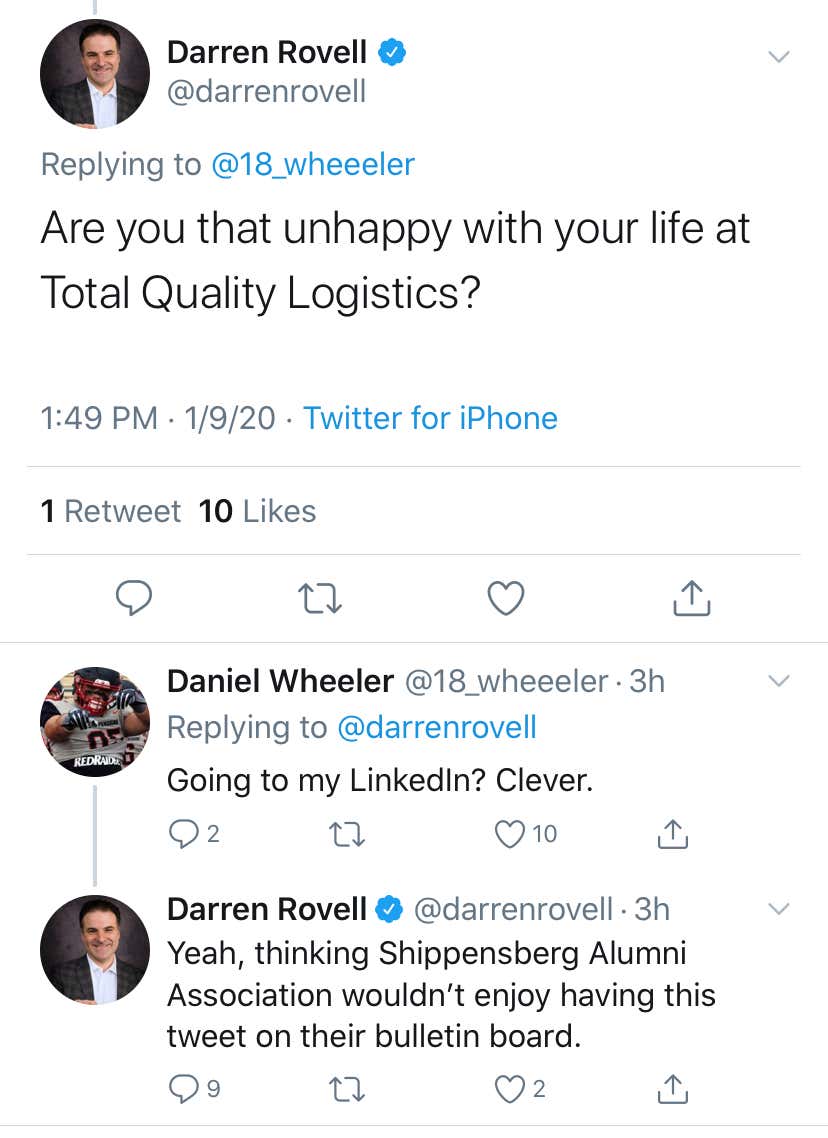 So Darren Rovell got into it with a twitter troll yesterday. Dude tweeted him saying he got bullied at school as a kid and Darren went off the fucking deep end. Right over the edge of the cliff into the Broken Brain abyss. The word “triggered” is so overused but this is CLEARY Rovell’s trigger. He went nuclear on this dude who registered like a 3 out of 10 as far as the Inappropriate Twitter Troll scale goes. Telling a public figure - one that is very well known and clearly successful in life - that they got stuffed in a locker in school is honestly about as harmless as twitter gets. Darren Rovell’s entire brand is essentially the definition of nerd. His content - the tweets, pictures, videos, and basically entire persona he’s curated - is that of a stereotypical nerd. He leans into that. That’s pretty much why he’s successful. So, if you’re going to make your living being King Nerd, at the VERY least, you’ve got to be prepared for tweets like that. As a dude who’s on Twitter 24/7, I expect him to know that twitter trolls get WAY WORSE than that. Overreacting to that tweet is just puzzling.

But honestly, the level of troll doesn’t even matter. I live by the code that what happens on twitter, stays on twitter. No matter HOW bad it gets, I never condone going after someone’s job. Messing with someone’s livelihood or trying to get them in trouble with their college because of fucking Twitter is just LAME, man. Social media, in general, is about busting balls, talking shit, and cracking jokes. It’s about debating and arguing, it’s about letting your opinions fly and engaging with the rest of the world about the topics that interest you. The very reason why people like Darren and myself are able to build careers off of social media and interaction on the internet is because apps like Twitter allow people to jump on the internet and let their deepest, most passionate selves out. And sometimes in that process, people get angry. They get defensive. They get aggressive. Sometimes people take jokes too far. Sometimes they cross a line. And sometimes it’s not a joke, it’s blatantly mean spirited and intentionally hateful. But whether it was hurtful or playful, I will never try to ruin someone’s livelihood for that. You take the good with the bad here on the internet. I have been able to build a career and provide for my family because of social media and the internet, but I also know that it can be a deep, dark place. Expecting to be able to make a very comfortable living but not expecting any sort of negative drawbacks is simply naive and unrealistic. It’s not some utopia where everyone makes each other feel great about life. It’s a place where you’re gonna find humor and intrigue...sex and violence...romance...competition, all that interesting shit - but if you can’t take the drawbacks, then maybe Twitter isn’t for you. If you think you’re going to be able to clean up Twitter one by one, ratting out anybody who’s mean to you, I got news for you Darren, it ain’t happening. The internet, in general, is a TV-MA place. Always has been and always will be.

Which brings me to the second part of Darren’s complete and total meltdown this morning - blaming Barstool Sports for bullying, and even taking it a step further and implicating us as a big part of the reason why CHILDREN ARE KILLING THEMSELVES. 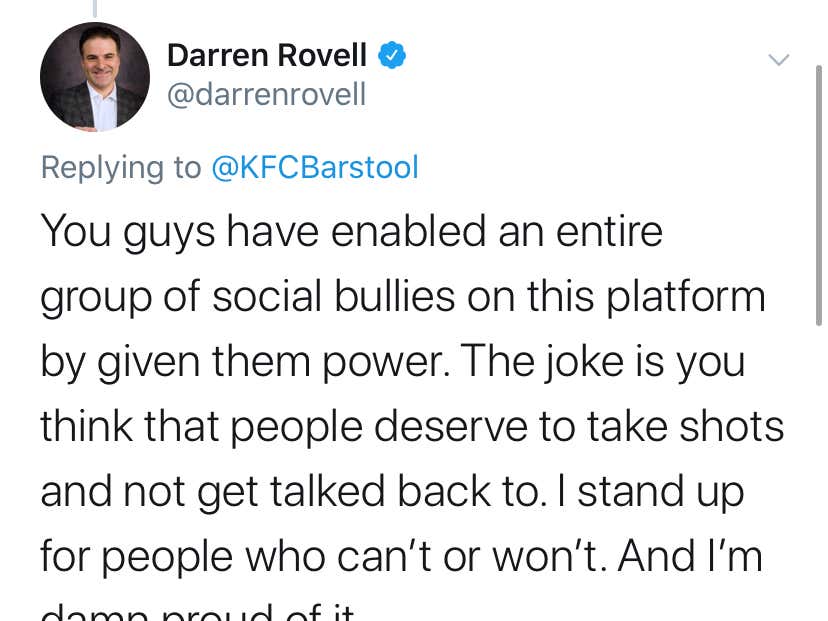 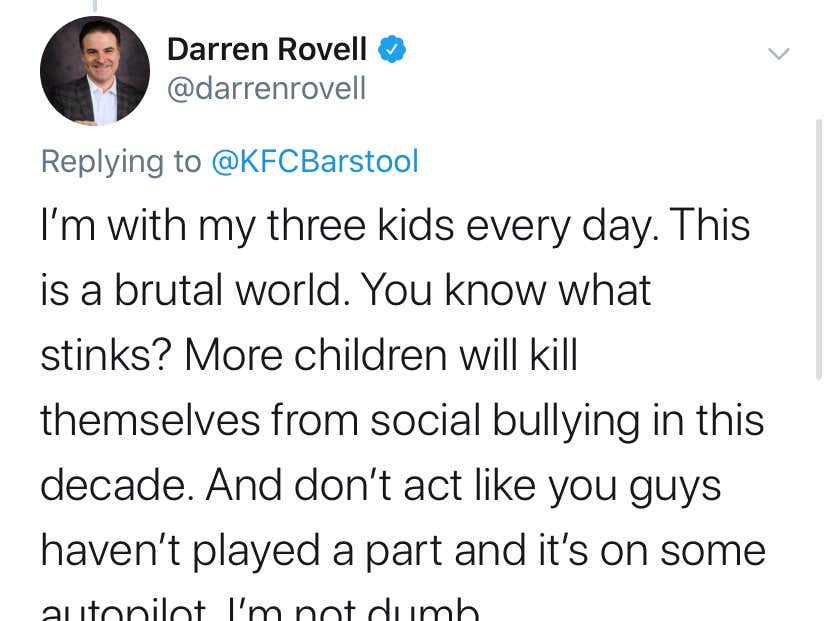 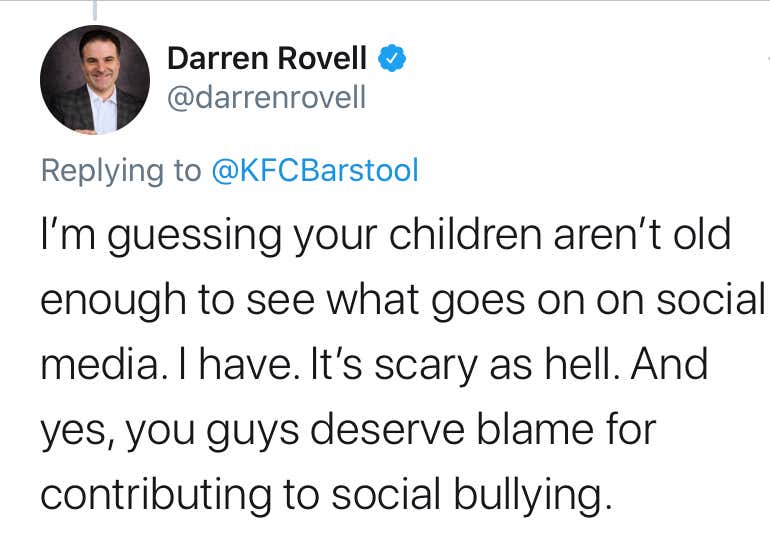 Absolutely fucking insane take from a guy who should have a much better understanding of how to goddam world works. I’ve always thought Darren was a weirdo but now I think he’s an idiot. That’s such an outrageous stretch he either believes it, making him a total idiot, or he’s just using it as a crutch in an argument against me, making him a lazy, disingenuous asshole. This argument is like saying video games are responsible for school shootings. That violence in movies leads to murder. It’s so completely far fetched it actually makes me laugh. “Children are killing themselves, we mustn’t discount Barstool Sports’ blogs as the culprit!!” Get fucking LOST, Rovell. We don’t bully at Barstool. Except for Dave he’s kind of a bully but even he knows the line. He isn’t making a blind dude travel a few hundred miles to kiss his feet, so credit to him! Perfect example of how anti-bullying we are.

But all jokes aside I genuinely truly believe we are anti-bullying. Because conflating what we do with bullying is a disservice to the people and the kids who are truly being bullied. What we do is crack jokes. We bust balls. We clown around. And yes, I have to admit that sometimes we get laughs at someone else’s expense. That someone, though, is almost always someone in the public light that has done something seeking attention, or something that hits the front page of the internet, or something intentional to illicit a response from us, either directly or indirectly. That’s EXTREMELY different than zeroing in on a person and picking on them to make you feel better about your own insecurities. That’s EXTREMELY different from continually and persistently attacking them with the intent of making them feel bad about themselves. Like I said, anytime we may say something off color it’s with the intent of being entertaining, and picking on the little guy or hounding a defenseless, innocent person is not entertaining. Nobody finds that funny. We would not be where we are today if we were bullies. People don’t like bullies. Bullies would not be able to build the biggest most successful blog/podcast empire on the internet. We don’t do that. We don’t condone that. And I’d go as far to say we don’t enable it either. We have very publicly, time and time again, told our fans to not go after anybody on the internet. If we are engaged in any sort of dispute, every single time we tell our readers or listeners to leave that fight to us and not cross any lines. Do you know why? Because we have tact and know how to make sure we do it in a funny and appropriate manner specifically so that it DOESNT become bullying. The average schmuck on the internet doesn’t know how to clown somebody without it going too far and becoming mean. When they do it, it becomes bullying because there’s no nuance to their tweets or jokes. We HATE those people more than anyone, trust me. They are the dummies that give all the idiots the ammo to continue their false narratives. The narrative Darren is running with right now, like a simpleton.

That’s what the Barstool haters never seem to realize. The behavior they condemn and the trolls they hate...WE hate them even more than you! We’re on the same goddam side. You’re talking to a guy who had trolls call child protective services because of my tweets to try to take my children away from me. (Come to think of it...hmmm...I never figured out who would be the type of person to snitch on a person over humorous tweets...maybe we have a lead?? *thinking face emoji*) You’re talking to a guy who has a secret, private Facebook group that does nothing but gossip about me and who I’m romantically involved with. A guy who has tons of strangers from the internet - who know nothing about the situation - who actively go out of their way to try to make my life as a co-parent and an ex husband and a single guy as difficult and as miserable as possible. I PROMISE you, I hate the bullies more than you do...because I’m dealing with them WAY more than any of the people who write those hit pieces or cry on twitter like Darren. But do you know what I do about it? Nothing. I put my head down, plow through that, and continue to make a living with the good half of the internet and social media. Because 2 things, 1) I understand the internet is a very powerful, volatile, scary force to be reckoned with that has a lot of toxicity that simply can’t be stopped. It can’t attributed to one website or blamed on a handful of bloggers, because it’s just humanity on display, and humanity is a shitty collective. And 2) you reap what you sow. I made my bed, so I gotta accept the consequences. If I was just some stranger who made a huge mistake and twitter trolls were targeting me to fuck with me and hurt my feelings, that would be bullying. But I’m a public figure who uses this platform to my advantage so I also gotta accept when it doesn’t play in my favor and it works to my disadvantage.

Which is maybe the most infuriating part of Darren Rovell making this jump to saying Barstool is responsible for the internet being a debauch place of evil. Well if that’s the case, Darren Rovell makes his career enabling gambling addicts. I could very VERY easily make the argument that Rovell’s Twitter is more detrimental to the psyche of the internet than mine. If there’s any kids out there killing themselves because of my tweets about poor people, well it’s because first daddy gambled away the entire family’s life savings after seeing Darren’s glorifying the rush of betting. And if there’s any fat people who commit suicide it’s because Darren fat shames them when they can’t fit in seat: 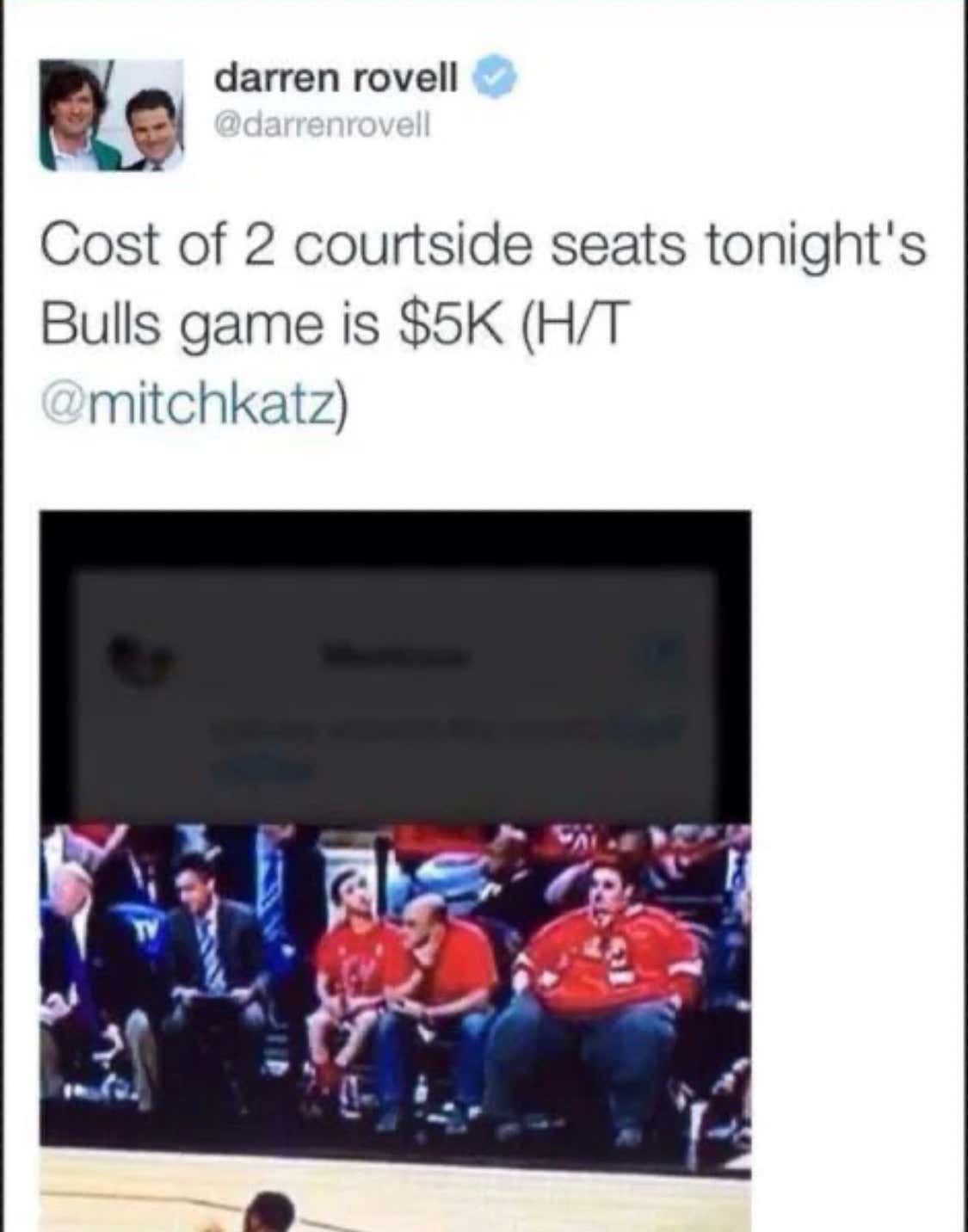 Or if there’s anybody out there, at all, man, woman, child, looking to commit suicide, maybe it’s because they watched JFK get his head blown off on Darren’s TL:

I would never make any of those claims though. Because they would all be a stretch and I’d look like an asshole. Only someone delusional would think the darkness of the internet can be attributed to any specific individuals. The same sort of someone who would claim they are anti-bullying while weaponizing their platform and status on the internet to try to get employees fired or students expelled. Only a real hypocritical dick would do that.