This guy right here is a maniac… 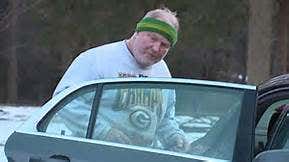 What a nice treat for the park goers.

An investigation finally picked up on Churchwell’s heinous acts in October, after the public park department got sick of cleaning up Churchwell’s mess with a pressure washer and giant tongs for 22 straight months.  They knew they were looking for a 9 to 5er as the pooping magically stopped every week around 5pm every Friday and didn’t pick up again until Monday morning.

Can you imagine if Churchwell decided to apply himself a little differently? The amount of dedication it takes to drive to a park twice a day for two straight years and then execute what I assume to be a not easy task especially in Wisconsin winters; the guy could have been a fucking astronaut.

Churchwell admitted to being the park pooper, but at first said he had only been doing it for six months as he probably physically couldn’t admit to doing it for two years while looking other human beings in the eye. When prodded a bit more he “remembered” that it was probably for the full two years. Churchwell was cited for disorderly conduct and has agreed to pay $6,000 in fines.

His punishment should be two years of cleaning Porta Potties with no pay. 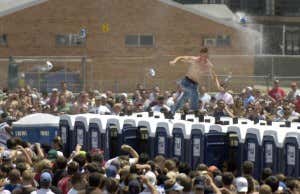