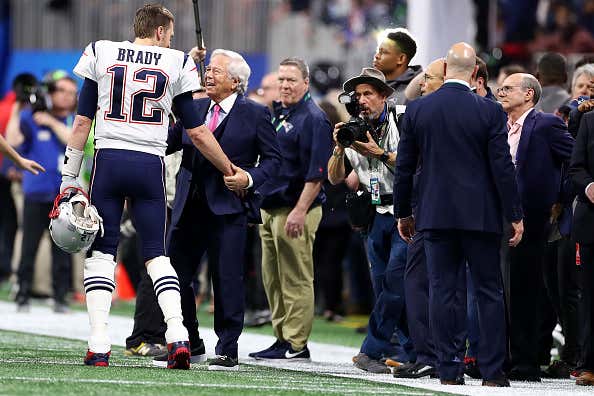 I’m not exaggerating when I say that one of the most often discussed topics in New England over the last five or so years has been how it’s going to end for Tom Brady in New England. I’ve made over 100 appearances giving book presentations (on this one and this one, since my kids’ college meal plans don’t pay for themselves) and not one time have I done a Q & A after without someone asking the question.

And there have been three schools of thought. Three distinct visions for what the end will look like:

–First, that Brady wins yet another Super Bowl MVP, rides a Duckboat in triumph, delivers a heartfelt and teary retirement press conference, then goes off to spread the gospel of pliability to an unpliable world.

–Second, that he and Belichick can no longer stand each other, so Brady leaves to go chase rings elsewhere and Belichick tries to prove his system is so unstoppable it can win six Super Bowls with Jarrett Stidham.

–The the third one is my own. Brady evolves into a Force Ghost, and then Palpatine-style regains his 22-year-old corporeal form and plays another 20 years, only more powerful than before.

Well now, as the offseason begins, as we get into our approach vector into the runway of what will either be Brady’s final contract in New England or the end of his Pats career, we find out that whatever happens, the decision is going to come down to … feelings? I guess?

Source – “I’m not crushingly disappointed,” Brady said, looking me straight in the eyes. “I think we fought hard. Our head is held high. We’re competitors. Every season doesn’t end in a Super Bowl win. … We just didn’t make the plays the last half of the season that we needed to make. Didn’t make the plays tonight.”

“First time in 20 years you’re truly a free man,” I said. “How do you feel about that right now?”

“Yeah,” said Brady. “I think I’m just . . . I’ll explore those opportunities whenever they are. If it’s the Patriots, great. If that doesn’t work, I don’t know. I just don’t know. I love playing football. I still want to play football. I think I still can play at a championship level. I’ve just got to go do it. I’m motivated to get back to work and training.” …

In his office four hours before the game, owner Robert Kraft broke his silence on Brady’s future.

“Before the season started,” Kraft said, “it was very important to Tom that he be free to do whatever he wanted at the end of the year. You know what I said to myself? That any person who plays 20 years for this team and helps us get to six Super Bowls, and been really selfless, has earned that right. I love the young man like he’s part of my family. Blood family. Anyone who’s done that has earned the right to control his future after 20 years. And you know, my hope and prayer is number one, he play for the Patriots. Or number two, he retires. He has the freedom to decide what he wants to do and what’s in his own best personal interest.” …

“I’m thinking of [Johnny Unitas], of all the quarterbacks who went elsewhere, and I just hope and believe that Tom . . . he is so special that he’s earned the right to do what’s best for him. . . . But I just hope and pray we fit into his plans. He is unique in the kind of leader he is, his work ethic, his selfless nature, everything. Think about it: He’s been with us 20 percent of the life of the NFL.”

OK then. The most momentous and consequential personnel move of the 21st century isn’t going to be predicated on a football evaluation or a business decision. It’s couples therapy. A three-episode story arc on “This is Us.” Mr. Kraft is closing his eyes and falling backwards and trusting Brady will catch him. We don’t know where Brady fits into the team’s salary structure going forward or if their self scouting has determined a younger quarterback would be more productive in their scheme. But we do know the franchise’s approach on the matter has been based on one of the magnets on your mom’s refrigerator. If you love something, set it free. If it comes back, it’s yours. If it flies away, it was never meant to be.

And for his part, Brady needed what, exactly? Some time for himself? Go on a journey of self discover? To take a great big dive into the middle of lake TB12? Get out more? Go to some Wine & Painting parties or audition for some Community Theater shows and reconnect with some side of himself that had been lost in the relationship? Or worse. This has the distinct feel of one side telling the couples therapist they need to see other people to find out who they are again.

I don’t know. If I sound bitter its because I resent that after all this time and with so much more still left to accomplish after a 12-4 season, it’s all come down to emotions. Feelings. Disappointment and love and hopes and prayers. When it should be coming down to plans, decisions, dollars, contracts and actions. The way it always has around here. The cold, unfeeling calculus of retooling for the next Super Bowl run.

Mr. Kraft is hoping and praying. So am I. I hope and pray we get through this part of the offseason as fast as humanly possible because it’s going to be torture. And the bottom line is that while 20% of the entire history of the NFL is impressive as hell, it’s still not long enough.