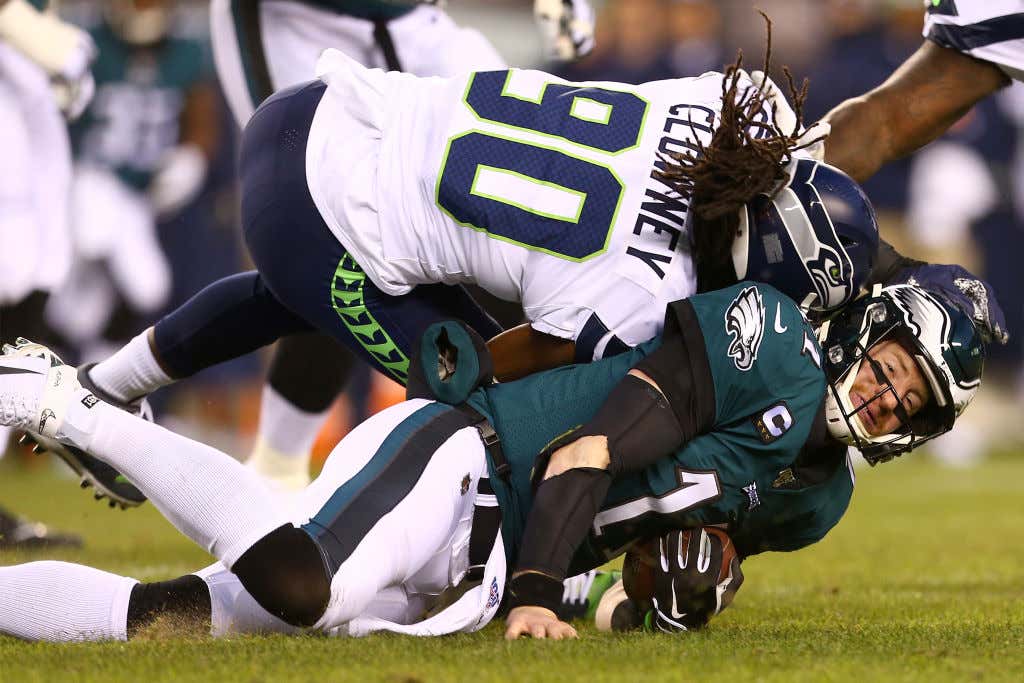 The human brain has the ability to accomplish some truly extraordinary things. We have developed languages, we have built cities, we've sent people to space. There are so many things that this brain of ours is capable of achieving. But then you see brains like the one that is apparently inside Danny Kanell's skull and you quickly realize that we're all still just a bunch of under-evolved apes whose favorite past time is sticking our own fingers up our ass just to give them a little whiff.

I mean what an idiot. What a fucking idiot. And not just turtleneck wearing shmuck, but anybody who took that scumbag hit from Jadeveon Clowney as an opportunity to point at Wentz and say,  "see! see! I told you he's injury prone!! How didn't he know that Jadeveon Clowney was going to assault him from behind as he was already falling to the ground? Can't win with a quarterback who gets literally assaulted and attempted murdered like that!".

Get the hell out of here.

How anybody can watch this clip and not immediately be disgusted by Jadeveon Clowney, but rather upset with Carson Wentz's inability to stay healthy is beyond me. Not only do you have the be the biggest sack of shit on the planet for that to be your initial thought, but you'd also have to be the dumbest sack of shit as well. Falling to the ground and Clowney decides to launch the crown of his helmet directly to the back of Carson's. If this were any other quarterback in the NFL, we have everybody talking about throwing Clowney out of the league. But for some reason, everybody always feels the need to trash on Carson Wentz getting hurt, as if there were ANYTHING IN THE GODDAMN WORLD he could have done to avoid this hit. It is insane. Imagine if this was Brady. Imagine if the roles were reversed and it was Derek Barnett on Russell Wilson. But yeah, somehow this is just Carson Wentz being too soft for the NFL I guess. Holy shit it's honestly impressive how donkey brained you need to be to think that.

Congrats to the Seattle Seahawks. All it took was a 1st quarter cheap shot against the most important player on the Eagles roster who also was one of the only starters on offense who remained healthy through the regular season to be able to hang on to a 1-score win against a bunch of practice players and a 40-year-old backup QB. What a force to be reckoned with.