The San Diego Chargers crush the Boston Patriots 51-10 in the AFL Championship Game at Balboa Stadium. The Chargers were in the AFL Championship for the third time, finally getting a win after suffering losses to the Houston Oilers in the league’s first two seasons. Keith Lincoln had a monster game out of the backfield, totaling 329 yards in total offense with two touchdowns.

Coached by Sid Gillman, the Chargers were the most consistent team in the early years of the American Football League, as they won the Western Division, in five of the league’s first six seasons. Playing in Los Angeles, the Chargers lost the inaugural AFL Championship the Houston Oilers 24-16. After wise realizing they had no place in Los Angeles, the Chargers moved to San Diego in 1961 and against lost to the Oilers in the AFL Championship 10-3. The Chargers suffered a disappointing 4-10 season in 1962 but bounced back to win the West again in 1963 with an 11-3 record.

The AFL’s Eastern Division was tightly bunched in 1963, with all four teams separated by two games. Out of the mix, it was the Buffalo Bills and Boston Patriots that finished tied atop the division at 7-6-1. At the time, NFL and AFL both had tiebreakers when there was a tie for first place at the end of the regular season. The Patriots coached by Mike Holovak would win the Divisional Playoff by beating the Bills 26-8 at War Memorial Stadium.

The 1963 AFL Championship, as was the end of the season, was pushed up a week do to the league’s decision to postpone games the Sunday after the assassination of President John F. Kennedy. The NFL, which played that weekend, had their championship game a week earlier, giving the AFL the stage all by themselves as the Chargers hosted the Patriots at Balboa Park. The Chargers had the advantage of being fully rested, as they rested while the Patriots toiled in the snow in Buffalo. 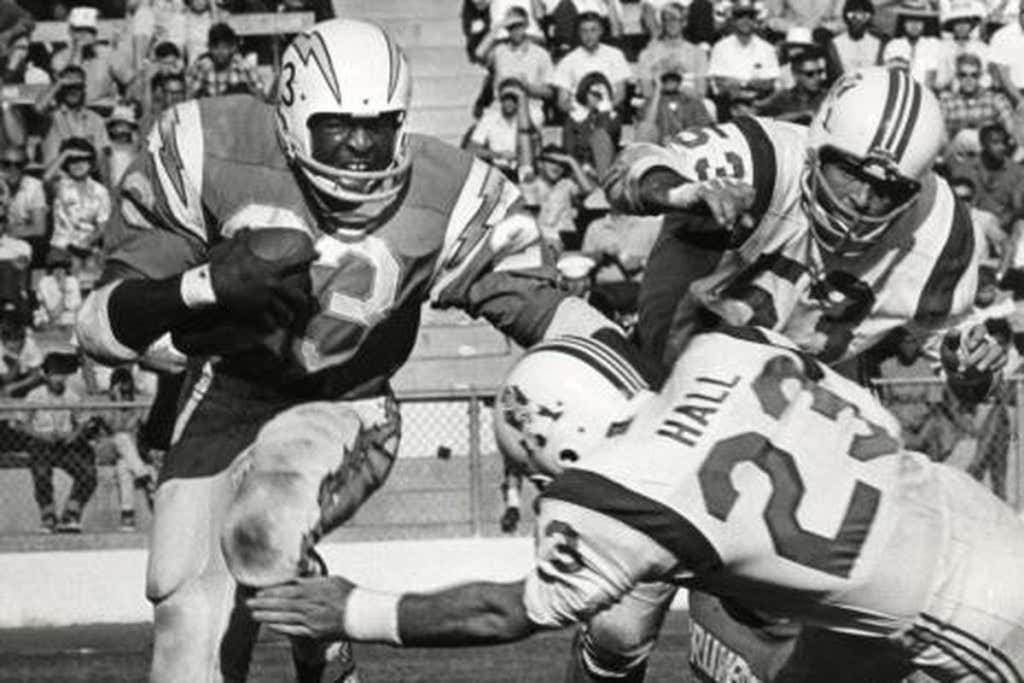 The Chargers were not able to sell out the game, as the AFL was still struggling to find its way in its fourth year. However, it was clear early that the Patriots were overmatched by San Diego. Leading the way for the Chargers was journeyman quarterback Tobin Rote. Rote who came off the bench to win the NFL Championship with the Detroit Lions in 1957 had returned to American Professional Football after playing three seasons in the CFL with the Toronto Argonauts. Rote put the Chargers on the board early with a two-yard run. On the next series, Keith Lincoln made it 14-0 with a 67-yard run. Lincoln would have a monster day for San Diego, rushing for 206 yards on 13 carries, with seven receptions for 123 yards as he accounted for 329 total yards from scrimmage to win the game’s MVP.

Larry Garron put on Boston on the board, with a seven-yard run, but the Chargers answered with a 58-yard run by Paul Lowe to make the score 21-7 at the end of the first quarter, showing that route was on. The teams traded field goals in the second quarter before the Chargers continued to pull away with Don Norton catching a 14-yard touchdown pass from Rote to make the score 31-10 at the half. In the third quarter, AFL MVP Lance Alworth reeled in a 48-yard pass from Rote to extend the lead to 38-10. By the fourth quarter, the reserves were in the game for San Diego, with John Hadl connecting with Lincoln on a 25-yard touchdown pass and later scoring on a one-yard sneak to make the final score read 51-10 in favor of the Chargers.