I know Frank already mentioned this. But I'll die before I let a momentous occasion like the 20th anniversary of the day Bill Belichick changed the world forever without embracing this moment. Like a beloved child on their 20th birthday, I need to put my arms around it and remember what it felt to cradle it ever so gently when it was all still fresh and new.

There are documents that have changed civilization, permanently and inexorably. The tablets Moses carried down from Mount Sinai. The Magna Carta. Martin Luther's Theses. The Declaration of Independence. The Lee's battle plans for Antietam which were found wrapped around cigars in a Confederate camp. The treaties that caused WWI and its terrible sequel. The first print edition of Barstool.

And none has had such a profound effect on the course of human events as the scrap of paper upon which Belichick wrote "I resign as hc of njy." I don't know where that historic artifact is. Maybe someone thought to keep it. Perhaps someone used it to mop up a coffee spill. Maybe its recipient, Jets GM Steve Gutman tore into pieces and tossed it in the trash. But I'd give anything to find those pieces because its said that any army which carries the ark that contains them can never be defeated.

I've written about this before (now available in paperback, cha-ching!), in the interest of time I'll plagiarize from myself:

Briefly, when Bill Parcells went through a messy public divorce from Robert Kraft after losing Super Bowl XXXI to the Packers, he eventually ended up with the Jets. Thanks in large part to Commissioner Paul Tagliabue, who got involved and negotiated a settlement where the Jets would send the Patriots a ton of draft picks in exchange for releasing Parcells from his contract. A major problem for the Pats was that, along with his talent for coaching and franchise building, Parcells took with him almost his entire coaching staff. Including Belichick, who had developed a mutual respect for Mr. Kraft, in spite of all the bad blood going on between the owner and the coach.

Parcells was planning to do what Parcells always did, which was to take over the worst team in the league, build them into a contender, then grow bored and retire to the racetracks of Florida after three years or so. So like any good monarch, he had a Plan of Succession in place. He’d stay on the Jets sidelines for three years or so, move up to the front office and let Belichick take over. Belichick was named assistant head coach and given a million dollar bonus by owner Leon Hess, whom he had also grown close to, as payment for him to stay in New York and not take a job elsewhere.

I'll briefly insert that the Boston press, as was typical of the Boston press, thought Belichick's ascension to the Jets throne was a colossal disaster for the Patriots, who had just fired Pete Carroll after three seasons: 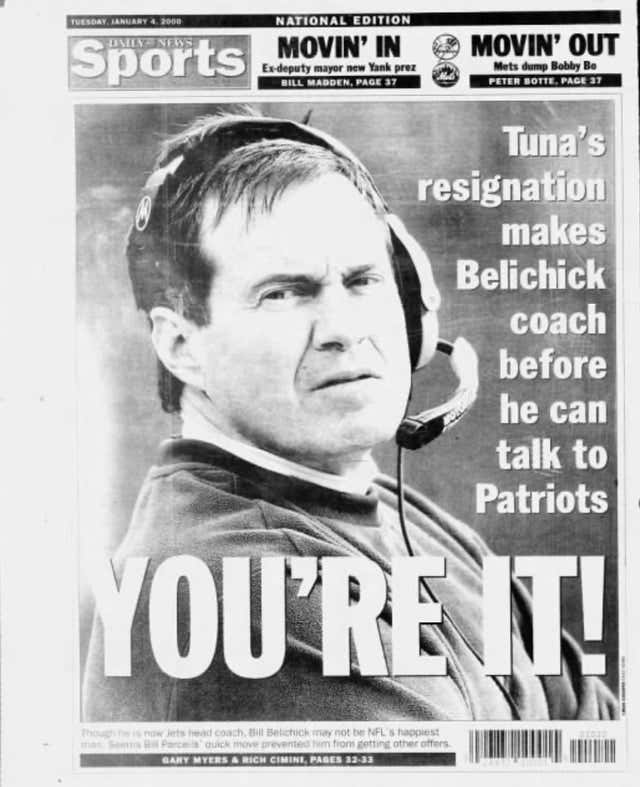 Continuing the story, this was the same Leon Hess who a few years earlier had named Rich Kotite his head coach and famously said “I’m 80 years old and I want results now.” He died waiting for them, even as Parcells led the Jets from 1-15 before he showed to the AFC title game. By the time Belichick was getting his shot the team was up for sale, the future of ownership was in doubt and, since the man he’s signed the agreement with was now worm food, he decided the deal was no longer binding.

Still, on January 4th, a press conference was scheduled at Weeb Ewbank Hall to introduce Belichick as Parcells’ replacement. My favorite detail of this saga is that shortly before the presser, Jets assistant and former linebacker on Parcells/Belichick’s Giants teams Carl Banks found his new boss running on the treadmill and asked if he needed anything. “No, Carl. Thanks,” Belichick replied. “I’ll be fine.” The words of a man who was, well … fine. Who had made a decision and was prepared to live with it. It just wasn’t the decision anyone expected.

That's when he handed the hastily scribbled note to Gutman, walked right to the podium without breaking stride and explained his decision to the shocked assembled media who thought they were there for a coronation, not an abdication. If Belichick had come out in a gorilla suit and started flinging poop around the room, they wouldn’t have thought he was any crazier than they did at that moment.

“I feel like I’m making a decision based on the circumstance and the situation as it is right now,” Belichick said in the monotone that would soon become legendary. “The agreement I had was with Mr. Hess. … The situation has changed and I have to do what’s fair for everybody.” He deflected all the stunned questions with “I just can’t do what I need to do here” and as many references to “unanswered questions” as he deemed necessary. While also alluding to the time he was the head guy in Cleveland and the owner moved the team right out from under him and he wasn’t going to walk into an uncertain situation like that again.

Parcells was reportedly livid. Gutman got up and talked about Belichick like a man who needed to be put under 24 hour observation and have all sharp objects removed from his room. He mentioned Belichick’s obvious “internal turmoil” adding, “I’m no psychiatrist, but I think we’ve listened in the last hour to a man who deserves our understanding and consideration.”

The next day the New York tabloids acted like he’d personally betrayed them, calling him “Belichicken” and “Belichick Arnold,” respectively. They described him as “disheveled,” “nervous,” “rambling” and “a wreck, his voice cracking at his own gall.”

Belichick responded to none it, despite being called an insane, incoherent traitor to his people. Save for one interview he gave years later when he dropped one of my favorite quotes of all time. “I’m going to say this one last time so that we can close the book on all this,” he said. “In all my years of football, I’ve never known a man who talked more and won less than Steve Gutman.” I’m not sure Gutman has made it out of the Shriner’s Burns Institute since.

And so, over the weeks that followed, the Pats and Jets did a total role reversal of The Border War from three years earlier. Now it was them trying to hire the Jets coach and them insisting they had him under contract. Only this time, it was somebody else who called the truce. Mr. Kraft answered his phone and a voice said “Hello. It’s Darth Vader.” The voice belonged to Parcells. He insisted on the Patriots 1st round pick in 2000 to release Belichick. Kraft agreed. Despite that video saying the Jets used the pick on Shaun Ellis, he in fact was the 12th pick and the Pats pick was 16th. Which the Jets traded to San Francisco, who took LB Julian Peterson.

One thing that’s been kind of lost to history is the reaction from the media, who thought Mr. Kraft was as nutty as his new head coach to agree to such a ripoff. The Pats beat writers and talk show guys mainly wanted Chan Gailey. I've love to lie to you and claim I was the first to embrace the move, but I want our relationship to be based on trust. I didn't know what to make of it other than to say Belichick seemed a lot more savvy than Pete Carroll and had a higher football IQ than GM Bobby Grier, who together had taken the 1996 11-5 Super Bowl team to 10-6, 9-7 and 8-8 while putting the franchise in Maximum Security Salary Cap Prison.

I especially didn't know what to make of it when the legalities were finally worked out and Belichick gave his first address as hc of nep, which began with him saying "I hope this press conference goes better than the last one I had." (Note: It did.) He went on to say the first order of business was to improve the team's depth, which seemed looney  given the fact they'd been trending downhill for three straight years and we were all convinced what they needed was more stars. This of course was before I realized he was the Messiah and what he was saying was his gospel.

In short order he started firing people (Johnny Parker was the first casualty, punished for the crime of getting WAY too much press for a strength and conditioning coach) and cutting payroll. In his first team meeting former first round pick Andy Katzemoyer meandered in five minutes late and sat down. To total, incredulous silence. "Who in the hell do you think you are?" Belichick fumed. "Get your ass out of here. I'll talk to you after the meeting." And with that, a new order was established.

And it all began with the press conference that had the most profound impact on the world as anything has in the last 20 years. I think it's safe to say that 17 postseason appearances, 41 postseason games (counting tonight's), 17 division titles, 12 trips to the conference championship game, nine Super Bowl appearances and six banners later, he made the right decision on that treadmill.