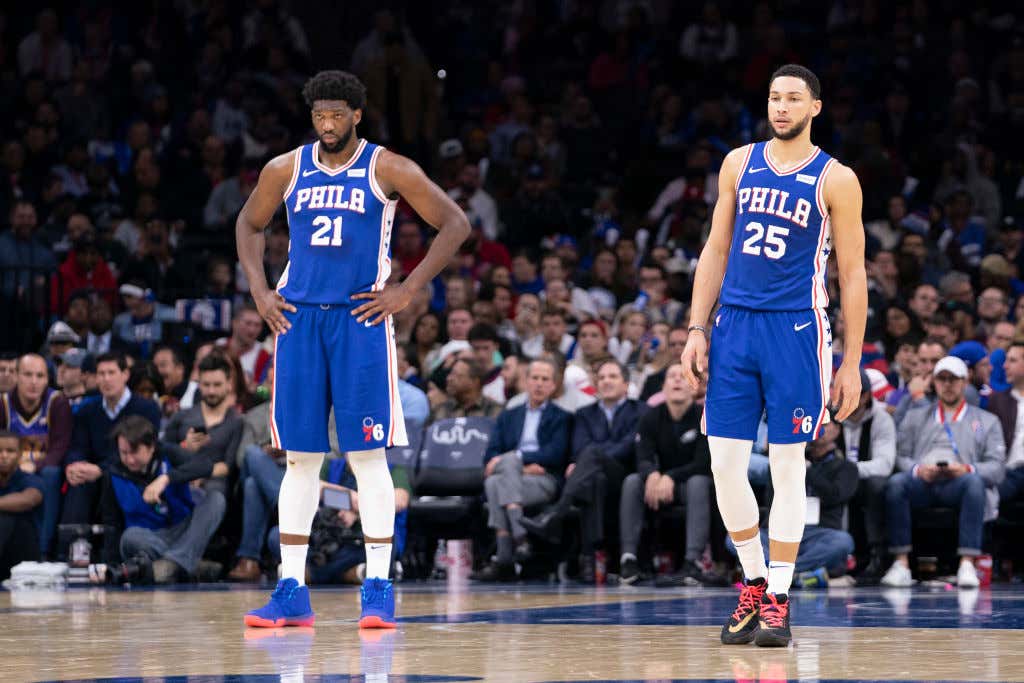 It was a little weird that we usually hear all about the Sixers on this fine website when things are going well. You know, like when they formed the best starting five in the Eastern Conference for the 50th year in a row, when Ben Simmons made that one three that one time and it was supposed to be "over" for the rest of the league. But now, after dropping 3 straight and living life in the 5/6 seed range you don't hear too much about them. Especially not when one of their franchise players is publicly calling out the other franchise player for being a scared little bitch. Some might say a coward. Well I can't let that happen. If shit goes down in the NBA it is my literal job to talk about it. I don't take any pleasure in this, I wish a comment like this didn't happen or that we could just brush it under the rug and pretend it never happened but sadly that would be a disservice to you the reader, and I cannot allow that to happen.

I ask you, find the lie in what Embiid said. Sixers fans get very defensive about Ben Simmons and his reluctance to improve even the tiniest bit on the offensive end. Don't be too hard on them, that's just their insecurity showing. They'll talk about his defense (which is fucking great), and how he's this all around player and much of that is true. But it's also true that he is hurting this team and lowering their ceiling if he never listens to anyone whether it be his coach or his teammates about improving his offensive game.

There really is no other explanation as to why Simmons won't come around. He likes to talk about how he can still be an All Star without a jumper and it shouldn't matter. OK cool man that's awesome. You're also going to keep losing in the second round, but I guess that just shows what is really important to him. Compare this to another guy who people say couldn't shoot. Did he come back with the idea that it shouldn't matter because he does so many other things well? Of course not

Now to the Sixers credit, they are still on a 51 win pace which is pretty good, the only downside is none of the teams around them look like they are going to drastically fall back. It doesn't help that they are 7-11 on the road, 8-8 against teams .500 or better or have the most loses against sub .500 teams of any of the top 5 seeds in the East (5). That's not all because Ben Simmons refuses to shoot or even consider improving his game, some of that is Horford figuring his shit out, some of that is health I'm sure. Their intended starting 5 has been together for 17 of their 36 games, but this isn't exactly a problem for other East contenders. Look at what BOS, TOR, IND etc have been able to do so far despite missing key rotation players. You can't one day say this is the most talented starting five in the conference when your best players have played 34 (Simmons), 36 (Harris), 28 (Richardson), (29) Embiid, 32 (Horford) games. Missing one guy here or there shouldn't matter if you're that stacked with talent right?

Twitter eventually bullied Simmons into taking a three, even if he's taking a total of (1) since he made that three on 12/7. He's taken just 19 FGA all season form 10 to 16ft, and you are being naive if you think this hesitation doesn't impact the Sixers offense, which currently ranks 14th in the NBA. When you have a worse offense than teams like SA/POR/DET, maybe it's time to ya know, actually work on things. Well see if Embiid's quotes finally get through to Simmons, but seeing as how he already has his max deal and a Jenner on his arm, I don't think he gives two shits.