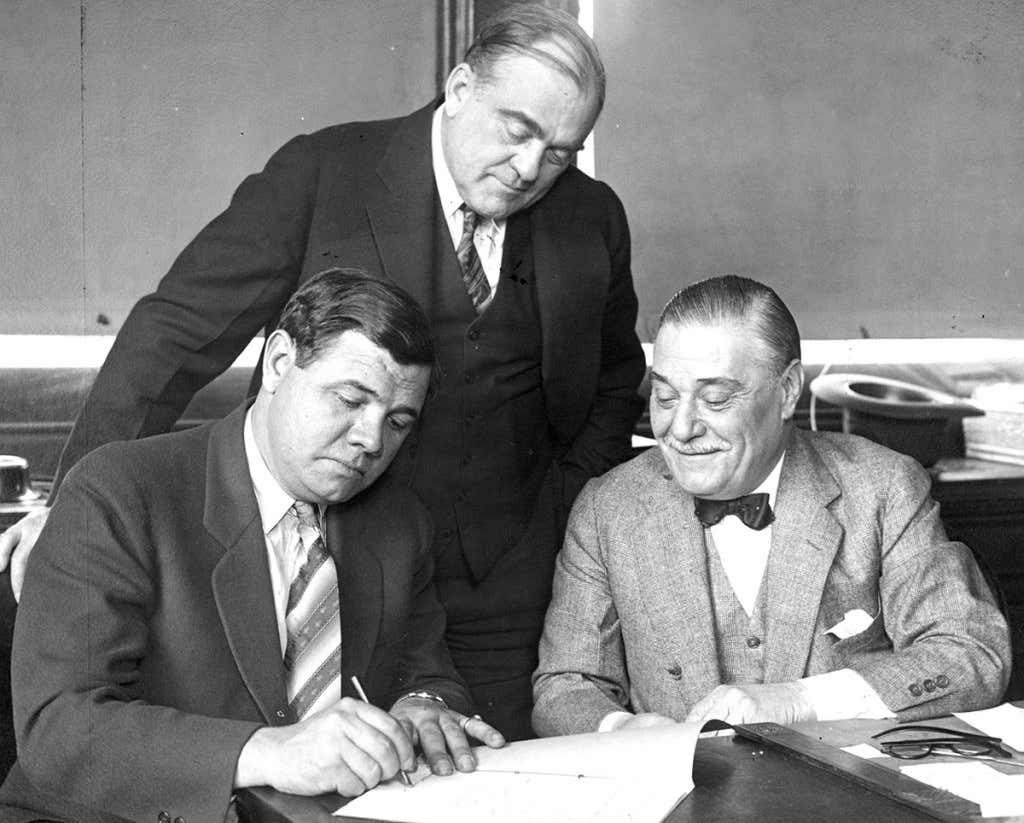 It’s the sale of the century, as the New York Yankees land Babe Ruth from the Boston Red Sox for $100,000. The deal which was agreed to on December 26th was announced send shockwaves throughout baseball. Ruth emerged as a hitter in 1919 with the Red Sox, setting a new single-season record with 29 home runs. Babe Ruth would go to turn the Yankees into baseball’s premier franchise.

Born in Baltimore on February 6, 1895, George Herman Ruth was born to be a hell-raiser. In trouble most of his early life, Ruth was sent to the St. Mary’s Industrial School for Boys at the age of seven. He would spend the next 12 years living at the reform school, as he was declared incorrigible. It was at the school that Babe Ruth learned how to play baseball.

In 1914, Ruth signed his first professional contract with the Baltimore Orioles of the International League. Due to his quick success, he became known as the Babe. At the time, he was a pitcher and quickly drew the attention of major league teams and was sold to the Boston Red Sox on June 11, 1914. With the Red Sox, Babe Ruth established himself as one of the top lefthanders in the game, as Boston won the World Series three times in four seasons. Along the way, Ruth set scoreless innings record and strikeout records in the Fall Classic.

While pitching, Babe Ruth showed a great proclivity for hitting and began to play in the outfield on days he did not pitch. In 1918, Ruth led the American League in Home Runs, with 11. It would start a 13-year stretch in which the Babe led the league in home runs 11 times. The 1919 season was the first year, with Babe Ruth playing in the outfield fulltime. That year saw him set a new single-season with 29 home runs, breaking the previous record held by Buck Freeman with the Washington Senators in 1899.

While Babe Ruth was quickly becoming the best player in baseball, his bombastic lifestyle and behavior began to become too much for the Red Sox to handle. While it was always written that Red Sox owner Harry Frazee sold Ruth to fund the musical “No, No Nannette,” the truth was it was about ridding themselves of a headache. As the Broadway play in question was not produced until 1925 after Frazee had sold the Sox.

The sale would change the course of history. Babe Ruth would become the face of baseball over the next decade and was primarily responsible for saving the sport’s popularity after the dark cloud of the Black Sox Scandal. In his first season with the Yankees, Ruth raised the record to 54 home runs, as he hit more home runs than any other team. Babe Ruth hit 59 home runs as the Yankees won their first pennant in 1921. That year saw them get evicted from the Polo Grounds by the New York Giants. In 1923, the Yankees got their own stadium as Yankee Stadium was built across the Harlem River.

Babe Ruth naturally hit the first home run at Yankee Stadium, which was hailed as the first modern three-tier stadium. The Yankees won their first World Series in 1923, they have won 26 more since. The 27 championships are more than any other team in any of the four major sports. Babe Ruth would later raise the bar to 60 home runs in the 1927 season. Ruth would hit 714 career home runs, batting .342 with 2,214 RBI, and is still recognized widely as the greatest of all-time.

While the Yankees became the greatest dynasty in sports, the Red Sox went into a long dry spell. Losing World Series in heartbreak fashion four times, leading to the belief that the sale of Babe Ruth cursed the Red Sox. The Red Sox would also always be tormented by the Yankees, until 2004, when Boston rallied from down 0-3 in the ALCS to win in seven games, claiming their first World Championship in 86 years.