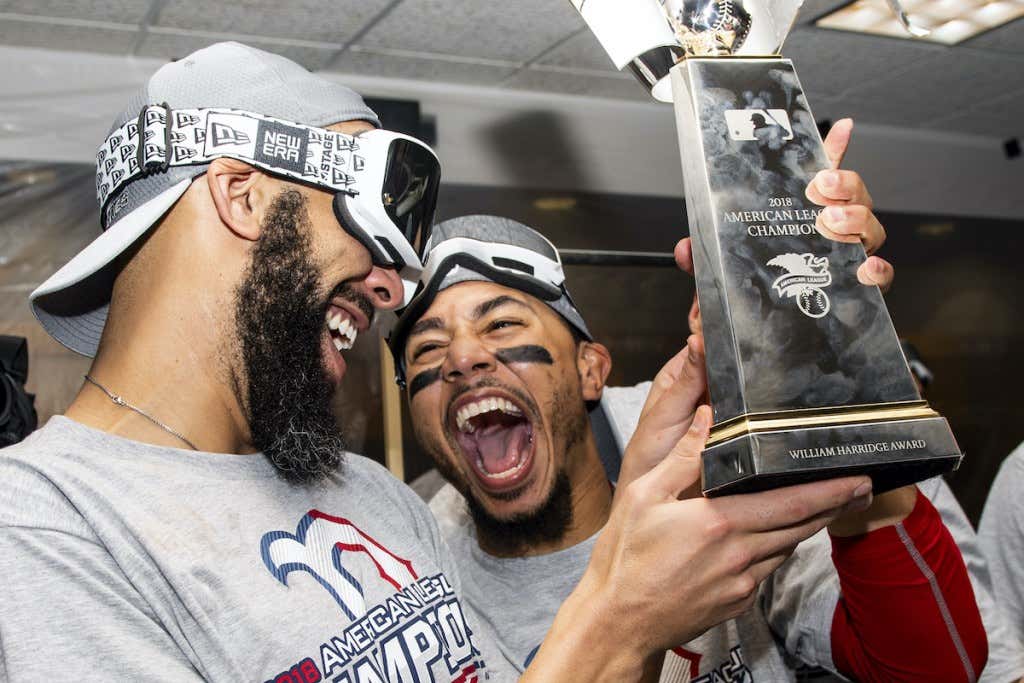 I published a blog about an hour ago where I said that I was getting the sense that Mookie Betts would still be on the Red Sox come Opening Day. A few minutes later, Jon Morosi reported that the Red Sox and Dodgers have been discussing a Mookie Betts trade that could possibly include David Price.

As a result, sources say the Dodgers’ negotiations with the Red Sox about acquiring Mookie Betts have become at least as frequent — and perhaps even more involved — than their talks with the Indians about Lindor.

The Dodgers’ conversations with the Red Sox are said to be more dynamic than the Dodgers-Indians talks, because Boston appears less insistent on Lux. Also, there exists a very real possibility that a Dodgers-Red Sox deal would include multiple players heading to Los Angeles.

Along with the Dodgers’ desire for an impactful right-handed bat, they would like to add a proven starting pitcher to replace some of the 42 starts they lost with the free-agent departures of Hyun-Jin Ryu and Rich Hill. Boston left-hander David Price, who pitched for Dodgers president of baseball operations Andrew Friedman in Tampa Bay, is one such possibility.

I know that no Red Sox fan wants to keep hearing it, but the chances of Betts signing an extension to stay in Boston are less than one percent. He’s got his people in his ear saying that he can fetch Mike Trout money in free agency. I don’t believe he’ll get Mike Trout money, because he’s not Mike Trout. Nobody is. Trout is in a league of his own, therefore so should be his contract. Now, can Betts fetch more than what the Red Sox have put on the table in extension talks? Absolutely.

That being said, we all know that the Red Sox are trying to shed payroll so that they can get under the luxury tax threshold and avoid paying $100 million or so in penalties and have their draft picks dropped to undesirable slots. These penalties were put in place as a compromise to not having a hard salary cap, but to also prevent teams like the Red Sox, Dodgers, Cubs, and Yankees from perennially blowing every other team out of the water in payroll with no repercussions. The Red Sox invested in their payroll more than any other team and got a World Series title to show for it. Now, this is the continued price that they have to pay.

Both Betts and David Price being named as players who could be on the move should come as no surprise. Teams still need pitching, and Price can be made into a very attractive option for teams in the market for pitching now that all of the top free agent pitchers have found homes for 2020 and beyond. Betts being one of the best players in baseball obviously means that he’s an attractive trade piece, as well. But being that he’s owed closed to $30 million in 2020 and is only under contract for one year, how attractive can he be on his own?

That’s where this package idea comes from. The Red Sox, if they were to trade Price and Betts together, could solve all of their payroll problems in one trade. They could also get a nice haul of prospects back in return, which might not have been the case had Betts and Price been traded separately. Sure, Betts will get you a nice return, but what are teams willing to give up for one year of a player that they still have to pay $28 million? Not as much as they’d give up if they’re also getting a relatively affordable starting pitcher in the deal, too, assuming the Red Sox eat some of Price’s salary.

The Dodgers are also reluctant to trade Gavin Lux, who is the number two prospect in baseball right now. According to Morosi, the Red Sox aren’t pushing for Lux in a potential trade, whereas the Indians want Lux in a deal for Francisco Lindor. Morosi names Dustin May and Tony Gonsolin, the Dodgers’ number one and three pitching prospects, in a potential Betts-Price trade with LA.

The Red Sox could possibly get by in 2020 if they were to trade Price and, let’s say, Jackie Bradley Jr. as a means to get under the luxury tax threshold, but trading their best player says to me that they’re punting on 2020. You don’t trade your best player and also hope to contend at the same time. If that’s the case, then a blockbuster trade with the Dodgers involving Betts and Price should just be the beginning. You don’t blow the whole thing up, obviously, but that can’t be the only move. If you’re not going to contend, then more assets should be out the door, too.

The bottom line is that a team like the Boston Red Sox shouldn’t be trading their homegrown superstar, MVP player. That just shouldn’t happen under any circumstances. I understand that part of this is on Betts and his willingness to sign an extension, but he’s also earned his right to reach free agency if he chooses to. Unfortunately, Red Sox fans know all too well how that story goes. We’ll trade our star player now in hopes that we can re-sign him in free agency. It’s not that easy, nor does it ever really work out that way.

If Boston’s hands are tied and they feel that trading Betts and Price is the only way to resolve their payroll problem, while also getting something of substance in return, then they’d better do it in a way that’s going to maximize that return. A package of Price and Betts makes sense.

That’s why the return is so important. I don’t know how you can look your fan base in the eye after raising ticket prices and then trading the franchise player for salary relief. That’s a slap in the face to the fan base that pays the highest ticket prices in baseball. The reason why I said that I didn’t see Betts getting moved is simple. Chaim Bloom’s first major move as the Chief Baseball Officer can’t be trading the best player on the team, can it? Apparently, it can.

So, if you’re gonna do it, then do it right. But I still can’t get over the fact that it’s even a possibility. This is the fucking Red Sox we’re talking about.