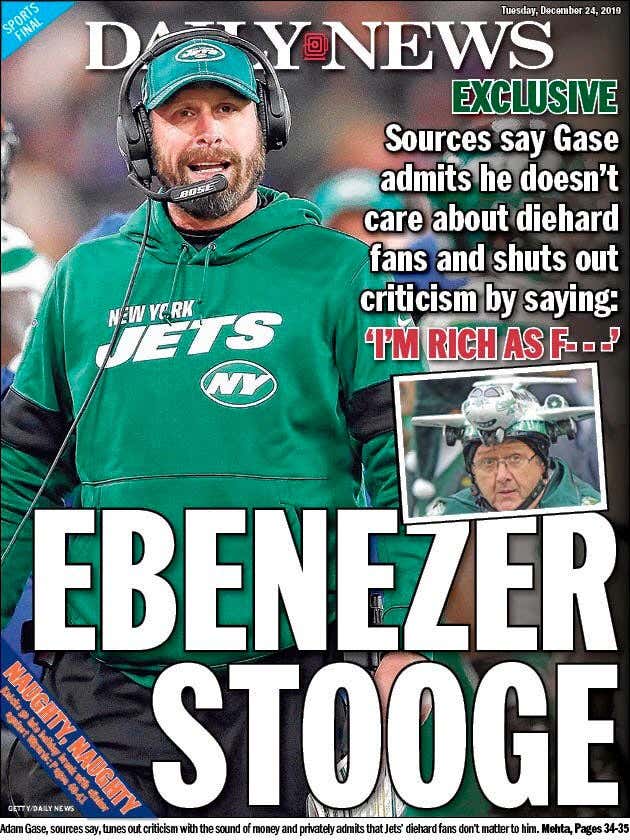 Maybe its because I watched Don’t Fuck With Cats over the holiday and I’m back in True Crime Mode…maybe its because I saw the best Whodunit in a longggg time in theaters this week, Knives Out…maybe I’m seeing things on Twitter that I WANT to see on twitter…maybe I just want this to be so goddam true for the drama of it all…

For those who dont know, quick back story. over Christmas a suspicious Twitter account caught the eye of Jets Twitter, @WyattV18. It was quickly decided that was an Adam Gase account, with the evidence being A) A psychotic amount of pro-Adam Gase tweets defending him from haters and pleading the case of why hes a fantastic coach who “would be out of a job for 10 seconds” if he was fired (he tweeted that one line about 600 times) 2) Gase’s son’s name is Wyatt and d) ALL of the tweets were sent during times when the Jets did not have practice or a game

It seemed open and shut. As clear as day. Jets fans had all ready the article in the Daily News. It said A) that Adam Gase proclaimed the haters dont bother him because hes “rich as fuck” and B) that its believed someone in his family, or he himself, has this burner to defend him. The maniacs of Jets Twitter began their research on @WyattV18 and we played judge jury and executioner. Guilty. Adam Gase was a thin skinned lunatic who couldnt bite his tongue. Who wasn’t rich enough to let the hate roll off his back. Adam Gase was Wyattv18.

*Crowd of people gasp, clutch their pearls, and appear shocked*

And yet…there was just a funny feeling about it. Because you have to stop for a moment and think about the origins of @Wyattv18 in the first place. The Daily News. Hmmm. Written by…of course none other than Manish Mehta.

A little more back story if you’re not a Jets fan…Manish is an EXTREMELY controversial beat reporter for the team. Often uses inside “sources” that just are made up people or facts, plays favorites, creates enemies, burns bridges, and drums up controversy. If you’re looking for balanced journalism, he aint the one. But if you’re looking for intrigue and drama, hes your guy. The blogger in me tips my cap and says “get those views and clicks by any means necessary.” But the sports fan and regular guy and the not-a-piece-of-shit-weasel in me says that if you gotta make up stories and allow personal vendettas to rule you and you spend your whole career slandering members of an organization, then just come be a smut blogger and stop posing as a newspaper columnist. His latest storyline is a complete fixation with Adam Gase. He initially GLORIFIED the hire, and has now done a complete 180 and is on a crusade to bash him at every turn. Some believe the heel turn had to do with Manish losing his inside source within the organization and turning on Gase because he no longer had the same access he once did. Who knows. All we know is that Manish will do WHATEVER it takes to stay relevant. And while it would be hypocritical of me to criticize that, its the level that Manish takes it to that presents the problem. Like, there are certain lines to that “by any means necessary,” and I’d say one of those lines is making up a burner accounts and posing as another man’s burner account. Thats just a diabolical level of commitment that I cant even wrap my head around. Almost couldnt possibly be true, right? RIGHT???

But thats where we are right now. A quick timeline of events:

Today I was tweeting about Adam Gase vs Leveon Bell after this video of Gase at a press conference was posted:

And a lot of people pointed out that the reason why he was so brief was not because of Leveon, it was because the person asking the question was Manish, who had just published his Rich As Fuck/Burner Account hit piece of Gase, and then did not show up on the first media day after that article. So Gase was snapping more at Manish asking questions as opposed to the subject matter he was actually asking about. So Jets twitter got to discussing Gase vs Bell and Gase vs Manish, and I went to the alleged Adam Gase burner to look up any past “Wyatt” tweets regarding Bell and why he has so much beef with him. I see this;

Which is funny but honestly a curious from a burner account. Think it through: I talk about this team on a big platform, I might take the time to do some digging, they are still trying to stay anonymous…block. But its not like that move really stops me from seeing the tweets, and all it does is kind of raise more suspicion, right? And then as people start looking at the tweets for me, an even MORE suspicious turn of events, the burner account refers to Adam Gase as “me” in one of the tweets:

Which, if it actually happens, is the number 1 burner fail on the internet. Its Day 1 Burner School stuff. You cant forget you’re playing someone other than yourself. And thats the problem. Its so goddam obvious, its hard to believe someone who is going through the pain of setting up this secret twitter would make such a rookie mistake. Unless, you were desperate to really really convince people that it was truly an Adam Gase account. So, we began joking around about the possibilities. Or, so I thought we were “joking”

Honestly I was completely fucking around. I was convinced it was absolutely Adam Gase, then the “Me” comment threw me off, and simply because Manish is a pot stirring asshole at the center of all Jets controversy, I offered his name up as nothing more than a “Wouldn’t it be crazy if?”

So I went out ran some errands and by the time I get back to my phone, I see that the @Wyattv18 is no longer just blocked, the entire account has been deleted.

Which, again I was sort of joking. I will admit I was stunned and got a kick out of the timing but I really hadnt done anything other than tweet the idea out in a joking manner. BUT, that wasnt the only thing at play. Turns out that after we kicked around that possibility, the @Wyattv18 account also tweeted a link and QUICKLY deleted the tweet. It was a link to an article. An article about football. An article about the 5 players Joe Douglas should bring back to the 2020 Jets. It was written in the Daily News. The author? *Lighting crashes outside the window* *Thunder roars* *Tension builds*

Absolutely stunning turn of events. As soon as there was some chatter about this burner being him…and as soon as the burner tweets out a link to his article…the account disappears. An account, I remind you, that was first discovered by the suspect now in question. So to conclude, an article that was discovered by Manish Mehta, then operates in such a way as to continue to fuel Manish’s anti-Gase content, and eventually mysteriously disappears right as Manish is linked to it while said account simultaneously tweets and deletes a link to his work. It appears as if the scale of justice has now completely tipped in the other direction. The once damning evidence against Adam Gase has now piled up and buried the very man trying to bury Gase in the media…his nemesis Manish Mehta.

*Takes a long drag from a wooden pipe*

And yet, the investigator in me has to think the tweeting and deleting is just as suspect as the burner tweeting “me.” We have to look at that move with the same level of skepticism. That, too, is a rookie mistake – forgetting to switch over from your burner account to your real account and posting to the wrong handle. That could be one final act for whoever was running the @Wyattv18 account to pin it on Manish. Maybe Adam Gase or whoever was running that account could no longer stand the heat. Maybe they wanted out of the Burner Life. They saw their opportunity with the chatter about it being Manish, they tweeted out his article, deleted it, and deleted the account. Pinning it on him with a frame job. Backing into it. Its like the guys who threw Laci Peterson’s dead body in the bay where Scott Peterson fished AFTER they saw that Scott was the main suspect. Goddamit Kevin! Thats another case for another day! Stay focused! Yes, maybe its not Manish, just someone who wants it to look like that. I guess we’ll never know

Shortly after all this drama unfolded, I received this DM from none other than the lead suspect himself, Manish Mehta: 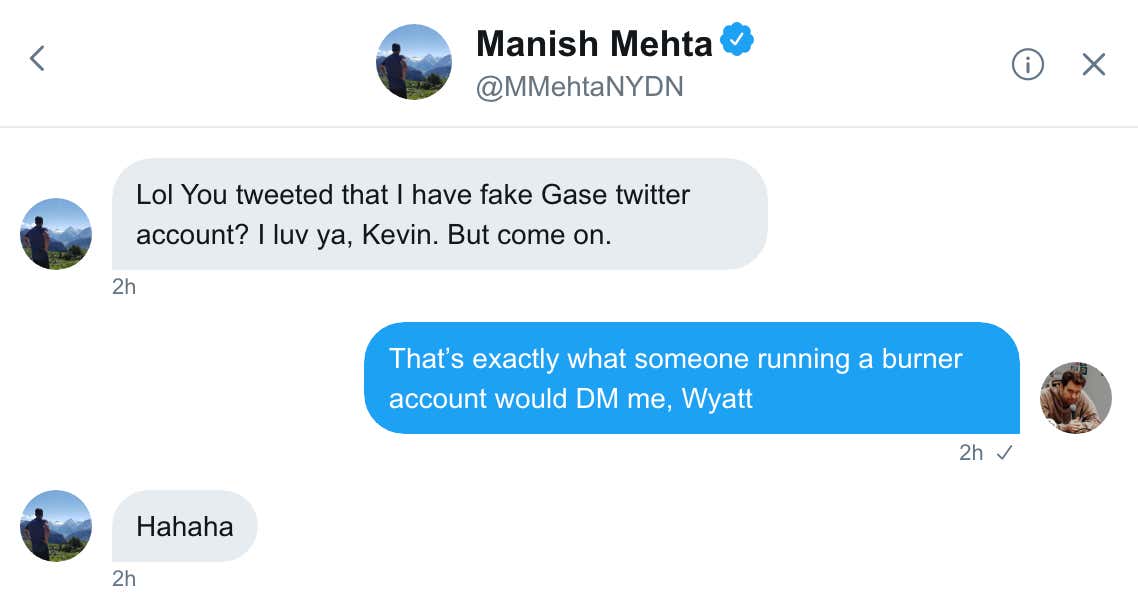 I reiterate once again, at the time I was merely joking. But little did I know, this slanderous, muckraking troll was hiding right in plain sight. Right there on the timeline. And now, right there, in my DMs. No way in hell an honest man sends that DM. Its about as close to hardcore internet evidence as you can get: the guilty direct message.

Sadly, the saga of @WyattV18 probably ends here. Unless we hire Baudi Moovan to do some digging up on IP Addresses and the location and times in which this account was created, I fear that our trail will go cold here. But I am confident laying my head down tonight saying that @WyattV18 is Manish Mehta. I conclude my investigation saying that Manish started this account, built it up for some time quietly, then used it for his big hit piece, needed to continue to run the account to make it continue to look like Gase, and it all blew up in his face. And no, I will not apologize to Adam Gase because that guy is still an asshole and even if that wasnt his burner the fact that it was believable that it was him and the fact that we all agreed tweeting 900 times a day anonymously about yourself is a total Adam Gase move is all you need to know.

Congratulations to the two biggest dickheads in Jets Life – Adam Gase and Manish Mehta. In a bust of a season, you two (and Wyatt, of course) provided the most entertaining storyline of 2019 for this football team. Case closed.